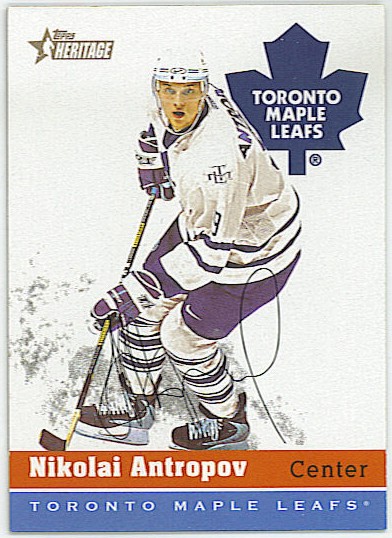 Nik Antropov is normally my cautionary tale about letting your first-rounder play too soon, before he has fully filled out.  In many cases, letting someone who's really still growing play against adults is a recipe for injury and it has happened to Leaf kids more than once.  In the case of Antropov, he had work on both knees and a shoulder (or was it both shoulders and a knee - either way, it was three major joints out of four) before he was 22.  It set him back a long way and while he did become pretty good in the end, we'll never really know for certain what his potential really was.

That's not really why I want to talk about him today, though.

Today, it's all about Nik Antropov and the missing 47 goals.  This, to me, is one of the most perplexing arguments of the entire off-season.  The Leafs gave up 47 goals, they say, and never replaced them.  (Let's leave off for the moment that Kessel in theory replaces 36 and Beauchemin 4 in a severely shortened season.)  It doesn't seem to matter that when Moore and Antropov left last year at the trade deadline, team scoring went up and it's only really Kubina's loss that represents an actual change from last season (covered to death when Kubina was LotD).

The crazy thing is that to hear most people talk, the Leafs will be effectively shorthanded any time Antropov's line takes the ice, as though they're only able to put two forwards on the ice because Antropov isn't there and the Leafs "haven't replaced him."

This is absurd.  Some portion of his production will be replaced as a matter of course simply because someone is playing his minutes.  Even if the Leafs put Ben Ondrus on the ice in Antropov's stead, he will contribute something just by virtue of being there.

This is why when they're doing baseball stats analysis, they always compare a player to a mythical typical replacement player.  The concept is that a person getting game action in a given situation will always accomplish something, even if it's not what a top-rated player would.  The loss of the player is thus measured in the delta between his production and the standard replacement.

In the case of the Leafs, the replacements for Antropov, Moore and Kubina are Kessel, Beauchemin and probably one of the kids - let's pick Bozak.  Kessel is going to play about 60 games, and let's allot him 20 goals (seems not unreasonable).  Bozak's production in college suggests an NHL production of maybe 15 over a full season, and Beauchemin is probably good for 6.  Now, those numbers came out of pretty much nowhere, but none are outrageously optimistic.  20 + 15 + 6 = 41.  On top of this, someone will play the 20 games that Kessel doesn't.  If said player comes up with 6 goals in that span, there's the missing 47.  This isn't impossible by any stretch.

The most recent projection for the Leafs that I saw was this Puck Prospectus nonsense that put the Leafs 29th overall despite predicting an improvement in their goal differential.  I've looked at what little they provide of their methodology and while the basic concepts seem viable, at some point you have to look at the output.  You can have the best-looking model in the world, but if the results don't pass the smell test, you need to revisit it.  The biggest knock I see is that their player projections are unduly pessimistic, particularly in terms of games played, and their player selections are odd, to say the least.

For the Leaf season to play out as projected, consider that only two players on the entire team will get to 70 games (Ponikarovsky 73, Stajan 71).  Only one defenseman will play more than 62, that being White at 68.  No player will score more than 20 goals or 50 points.  Bozak and Stalberg won't see a second of ice between them, but Tim Brent, Wayne Primeau, Ben Ondrus and Andre Deveaux will all play between 27 and 39 games.  Jamal Mayers will suit up for 59.  Every forward will see their production decrease save for Kulemin and Mitchell, who will simply stagnate.

In goal, the Leafs will go for a three-way split with Toskala leading with 37 games.  Gustavsson will bring up the rear at 35, and Joey Mac gets 36.  For the record, that is 108 appearances, meaning that a goalie will be pulled 26 times, or in just under 1/3 of all games.  (Now, if the Leaf goaltending is so bad that in one of every three games, Wilson has to yank his netminder, then maybe this team will indeed finish second last.)

20 years ago, I had a NHL simulator that fit comfortably on a 5 1/4" floppy.  I could generate similar results.

I get that these are just projections that someone has pulled out of a stats engine.  The crazy games-played scenario is true for all teams.  They put a caveat after each block of stats, but these don't really show much understanding of anything either.  To wit:

"Burke concentrated on building from the crease out. As such the back end of the team received a lot of attention, while the forward unit was largely ignored. Wallin was the only addition who should be able to provide any aid to this low-scoring group, though Burke seemed more excited by the additions of Colton Orr and Wayne Primeau. Both Orr and Primeau are known for their tough, physical play, but unfortunately for the Leafs, they've only combined to score exactly one goal in 106 games last year. Physical intimidation is wasted if you can't back it up with at least a minimal amount of skill."

There's more, but it's no better.  Note that Wallin is mentioned as the one offensive addition, but he doesn't apparently play any games, either.  Go Marlies!

Anyway, this hasn't been much about Antropov at all, save for the fact that VUKOTA thinks we're hooped without him and I think VUKOTA's projections aren't worth the paper they're not printed on.

As such, I give you this Antropov memory.  His on-ice play was good, but this is the stuff of legends:

The HHOF take on Nik:

"The Toronto Maple Leafs surprised many hockey observers when they drafted big center Nik Antropov tenth overall in the 1998 NHL Entry Draft. Though NHL Central Scouting had him pegged as the 17th best European available, the Leafs made him the second European drafted and made it quite clear they felt they'd secured the sleeper of the draft.

Antropov, a 6'5 forward, hails from Kazakhstan, a region that is not often heavily scouted. Though the Maple Leafs drew criticism for the first round gamble, many critics were quickly silenced when after just two games in the minors Antropov was called up by the Maple Leafs --- and stayed with them for the full campaign.

Antropov made an immediate impression durie his rookie season, accumulating30 points as a rookie. However, his rookie season ended on a sour note, when he blew out his knee in a playoff game against the Ottawa Senators.

During his second season Antropov's totals dipped when he scored just six goals and 17 points, though he was recovering from the knee surgery. In order to regain some conditionning, Antropov was assigned to St. John's. Once in St. John's, Antropov regained his confidence and began to score at an impressive clip posting 35 points in 34 games. However, bad luck struck again and once again, Antropov suffered a season-ending knee injury.

As the 2002-03 season began, many wondered what Antropov's future would hold. Early indications dictated how the hulking forward's season would go, as Antropov utilized his size and strength in the corners to create room for himself and his fellow linemates and thus established personal bests in goals (16), assists (29) and points (45).

Before travelling overseas during the NHL lockout to compete with both Ak Bars Kazan and Lokomotiv Yaroslavl, Antropov would miss 20 NHL games during the 2003-04 season with the Maple Leafs due to a shoulder injury. He suffered through two more injury plagued seasons in 2005-06 and 2006-07 with unrelated injuries but returned in 2007-08 relatively healthy.

In his second season of a two-year contact with the Maple Leafs, Antropov set new career highs with 26 goals, 30 assists for 56 points in his 72 games played.

On the international stage, Antropov represented his native country Kazakhstan in the 2006 Winter Olympcis in Turin.

On March 4, 2009, the NHL's trade deadline, the towering forward was traded to the New York Rangers in exchange for a second round draft pick and a conditional pick." 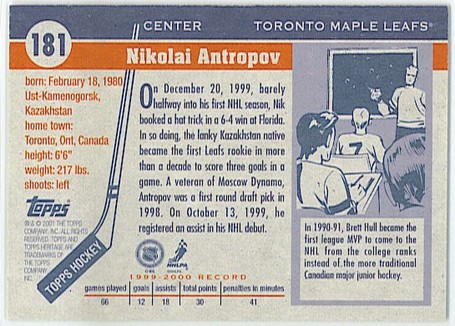