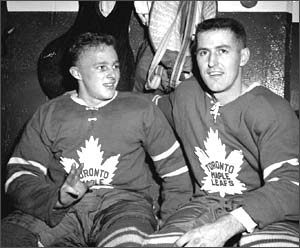 "THE LEAFS DO IT AGAIN

JUNE 9, 1965: With their NHL goalies Terry Sawchuk and Johnny Bower at age 35 and 40, respectively, the Leafs allow the Bruins to pluck Gerry Cheevers, 24, from their minor-league system in the intra league draft. He'd go on to backstop two Stanley Cup teams and reside in the Hall of Fame."

The Leafs lost a whole bunch of players over the years that I really wish they hadn't - Nevin, Duff, Seiling, Brown, Mahovlich, Pappin, Brewer, Unger, Horton, Parent, Keon - really, the list is pretty much endless.

Sometimes, you look at the circumstances of the trade and you can get a sense of why it happened and then try to judge why it worked or why it didn't.  It's pretty much imperative that you look, though.  Otherwise, you see a fact in isolation and it comes across as yet another oddball move that makes no sense.

There's a little bit more, though.

In the summer of 1965, the tandem of Johnny Bower and Terry Sawchuk were the defending Vezina Trophy winners.  At that time, the Vezina was awarded for having the lowest goals-against average, making it the equivalent of the Jennings today.  They were the ultimate old warhorses, having seven Stanley Cups, four first-team all-star selections, four second-team all-star selections and now five Vezina Trophies between them.  Both are in the Hall of Fame, as well.

Sawchuk had been added to the Leaf fold just prior to the '64-65 season.  Johnny Bower was becoming more injury-prone as he aged and he wasn't up to playing a full season any more.  The Leafs had been using Don Simmons as a backup, but given the option of a Sawchuk, they jumped at it.  Sawchuk also had a lot of miles on him - his nerves were bad and his back was worse, but with each playing part-duty, they combined to give the Leafs the best goaltending in hockey.

The six-team league meant that a lot of very good players spent their entire careers in the AHL, which was then more a tier-II pro league than a developmental league.  The Leafs top AHL affiliate in 1965 was Rochester, whose starting goalie, Gerry Cheevers, played 72 games, led the league in GAA and was the first-team all-star.  Gerry had only two NHL games to his credit, both coming in 1961-62 when Simmons was injured and Bower followed.  He had one win and one loss.

The Bruins, suffering through one of their worst stretches in their history, claimed him in the intra-league draft.  They had Eddie Johnston as their starter (he was the last goalie to play a full NHL schedule) and needed help at backup.

Cheevers wasn't really ready for this yet.  In 1965-66, he'd play seven games and wouldn't win any of them.  There was an injury and he'd be shuttled back and forth between the NHL and AHL.  This would actually go on for years.  The first season that Gerry would play that didn't involve AHL action would come in 1967-68.  Of note is that another rookie goalie the Bruins would send to the wolves in 1965-66 was a young Bernie Parent.  As said above, there was no shortage of talent in the minor leagues.

So what would have happened if the Leafs had exposed Sawchuk instead?  If he had been claimed, the Leafs would have been left with a 41-year-old injury-prone starter and no backup.  What's more, the Leafs won the 1967 Stanley Cup largely on Sawchuk's back.  He was instrumental in beating Chicago after Bower went down with a leg injury in the semis, then he beat Montreal after Bower went down again in the Final.

Post-1967, the Leafs had their troubles, but none of these really surrounded their goaltending.  After losing Cheevers, the Leafs added a veteran backup in Bruce Gamble.  Toronto's third goalie until Sawchuk left, he slowly took over the starter's role as Bower headed toward retirement.  In 1967-68, the Leafs were actually second overall in GAA despite missing the playoffs.  They were over .500 and had a good goal differential, but a suspect record against the expansion teams doomed them to fifth in the east.

They'd make the playoffs in 1968-69, again with good goaltending numbers (fourth overall).  They simply ran into a buzzsaw in Bobby Orr's Bruins.  1969-70 was a trying season and the wear started to show on Gamble.  The main problem, though, was that by that time the defense consisted of a 39-year-old Tim Horton and five players all at least 15 years his junior.  Horton had a rough season and nobody else had any experience.

For 1970-71, the Leafs acquired Jacques Plante, who turned in a 1.88 GAA.  In mid-season, they'd move Gamble and Mike Walton to pick up Bernie Parent.  If not for the WHA, they'd have been set for years.  Of course, Cheevers bolted for the WHA as well and stayed there even longer than Parent did, so he'd have been no help.

Realistically, the only season the Leafs really could have used Cheevers was 1969-70, and there's no indication that he'd have saved that season.  Even so, it's not likely the Leafs were going to win that Cup, given the state of that defense.

So in the end, keeping Cheevers might have allowed the Leafs to make the 1970 playoffs at the cost of the 1967 championship.

Personally, I don't make that deal.

Just as an aside, here's another handful of goalie deals from that era:

This wasn't just a Leaf thing - far from it.  That's basically a who's who of goaltending in the late 1960s and early/mid-1970s, and none of them had their glory with their original teams.