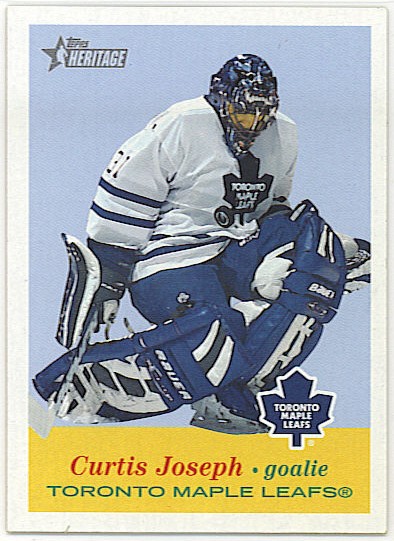 Continuing the trend of recently-departed Leafs, today it is Curtis Joseph.  Cujo reached a milestone last season with his 450th career win and his total of 454 stands fourth-best of all-time.  Of course, he also managed to tie Gump Worsley for first overall with 352 losses, proving that in order to be allowed to lose that many games, you have to be pretty d@mned good.  For the record, the rest of the top 10 in losses includes such luminaries as Terry Sawchuk, Harry Lumley, Glenn Hall, Ed Belfour and Patrick Roy.)

It's Joseph's first go-round that I'm more interested in, though.

After last night's win, Ron Wilson was careful not to read too much into the fact that this team has won four in a row and has shown the ability to a) score goals, though apparently nobody has scored them because nobody knows how and b) fight back from deficits and find ways to win.  Even though the media is being cautioned to cool it, I can't help but imagine that this kind of streak is being noticed by the players.  I'd hope they can feed off it.

In 1998, when the Leafs had a brand new coach in Pat Quinn and a brand new goaltender in Curtis Joseph, Quinn wanted to set the tone for the team by winning as much as he could in pre-season.  The Leafs had been lousy for a few years running, and he wanted a new culture of winning to start as soon as possible.

The Leafs won a lot that year, 7-2 or something, and were able to carry that all the way to the third round of the playoffs.  They never really looked back after that.

Joseph would carry this team to the third round twice in four seasons, winning 32 playoff games, 8 by shutout.  He set the tone of the Leaf playoff dominance over Ottawa, for which we can ever be grateful.

The HHOF take on Cujo:

"One of the true "money" goalies of the 1990s, Curtis Joseph developed into an NHL star while guarding the net of the St. Louis Blues, Edmonton Oilers and Toronto Maple Leafs. Although he was usually excellent in the regular season, "Cujo" became of the most feared playoffs foes due to his penchant for elevating his game in the NHL's second season. His cat-like reflexes and indomitable competitive spirit made Joseph one of the toughest goalies for shooters to face in recent years.

A native of Keswick, Ontario, less than an hour north of Toronto, the shy Joseph initially struggled to make an impression as a hockey goalie at the amateur level. He almost gave up altogether before venturing to Wilcox, Saskatchewan to play for the Notre Dame Hounds. At this point Joseph was trying to earn a college scholarship through hockey as a means of gaining access to an education. He impressed a few scouts and eventually was offered a scholarship to the University of Wisconsin, which was trying to replace the departed Mike Richter.

Joseph excelled for the Badgers during his one season of college hockey in 1988-89. He won 21 games and was voted on to the WCHA Conference First All-Star team. A few weeks after the season "Cujo" was signed by the St. Louis Blues and left college for a pro career. He began the 1989-90 season with the Peoria Rivermen of the IHL but was eventually called up to the Blues to solidify their goaltending picture after Greg Millen was traded to the Quebec Nordiques. Joseph played in 15 regular season and six playoff games while solidifying the goaltending picture with Vincent Riendeau.

Joseph became the Blues' first string goalie in 1991-92 when he won 27 games in 60 appearances. The following season he won 29 games but earned league-wide attention with his brilliant effort in the playoffs. Even though the club lost to Toronto in the Norris division final, Joseph emerged as a hero after stopping 119 of 122 shots in consecutive double overtime games.

Prior to the 1995-96 season the cost-cutting Blues shipped the popular Joseph to Edmonton. He played well but the Oilers were in the early stages of a rebuilding process. In April 1996 he excelled for Canada at the World Championships and later that year represented his country in the inaugural World Cup of hockey.

In 1996-97 and 1997-98, Joseph helped the young Oilers reach the playoffs where his brilliance guided the team into the second round both years. Joseph shocked the hockey world in July 1998 when he left the Oilers to sign with the Toronto Maple Leafs. Although he never dominated the NHL's goaltending statistics, "Cujo" was looked upon as one of the league's top netminders whose play only improved during the post-season.

His impact on his new club was immediate as his excellent goaltending helped the Leafs register 99 points and reach the Stanley Cup semifinals. His coolness under fire impressed back up netminder Glenn Healy. Joseph won 35 games in the regular season and nine in the playoffs and was runner-up to Dominik Hasek in the voting for the Vezina trophy.

As Toronto closed out the twentieth century, Joseph's netminding was a key reason behind the club's challenge for the most points in the Eastern conference. The Leafs finished at the top of the Northeast division to win their first regular season title since 1962-63 and were a legitimate contender for the Stanley Cup. Joseph's popularity reached epic proportions in hockey-mad "Hogtown."

Joseph went on to play two more seasons with the Maple Leafs and was a member of Canada's Gold Medal Olympic Team in Salt Lake City before leaving the team in the the summer of 2002 to sign as a free agent with the 2002 Stanley Cup champion Detroit Red Wings. Looking to fill the void left by Dominik Hasek who retired following the Wings Stanley Cup win, the team felt that Joseph would be the ideal replacement and early on has shown that the team made the right choice. However, following a one year hiatus, Hasek returned to the Motor City in 2003-04, which created a log jam in the Red Wing goal with Joseph, Hasek and Many Legace.

Injuries would limit Joseph to a mere 31 games in 2003-04 and following a cancelled 2004-05 NHL season, he was acquired by the Phoenix Coyotes. With the Coyotes Joseph would split both his seasons and record his 424th career win, thereby moving into sixth place on the NHL's all-time list, passing Tony Esposito. After a pair of seasons in Phoenix, Joseph would not be resigned by the club and remain an unrestricted free agent up until the Calgary Flames signed the veteran goaltender on January 14, 2008.

In Calgary, Joseph notched his 448th career NHL win which moved him past Terry Sawchuk for fourth place in all-time wins. In the post-season, Joseph replaced Kiprusoff to backstop the Flames to an exciting come from behind win after the club initially fell behind 3-0. However, the Flames were eliminated that round and Joseph would sign in the off-season with the Toronto Maple Leafs." 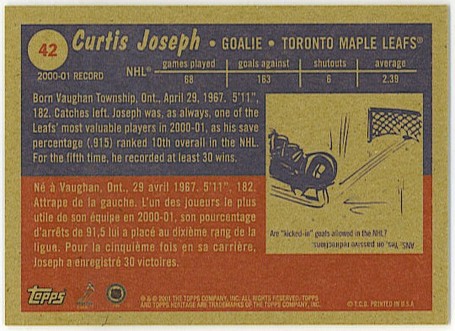