Summer has given way to fall this week and obviously that means a couple of important things. One is: VAMPIRE MOVIES!!1! The other is new hockey video games! And until they can merge my two faves (online screenname: PhaneufBiter69), I'll have to settle for one or the other. To that end I want to review the newest game out there: TML 10! 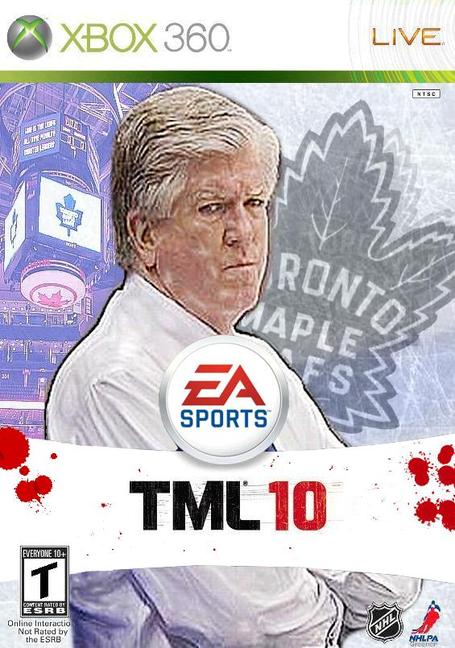 Exploding out of the gate TML 10 is the best TML to come out in years. At least  the best since the pre-lockout TML 04. For those of us who've suffered through the versions since that time it appears to have been worth the wait.

While the gameplay is top notch, the real draw here is the GM Franchise mode, where you play as Brian "That's Mr. Brian Burke" Burke, a hard-nosed Rhode Island Red with a long memory, a short fuse, and deep, deep scowl lines. The Burke character, working from an engine borrowed from "Genghis Khan" and "The Second World War", is a welcome change from past years as things in TML 10 have actually changed.

In TML 10, every skill, like skating speed and shooting accuracy, is attached to sliders. This allows Burke to dial them up or down. All except the "Fighting" skill which has its gauge locked at 100%. When this skill is in effect, the player has to fight and beat the Jesus Christ out of the opponent and if you don't the Burke character shuts your game down and you have to go back to playing Conker's Bad Fur Day.

After you've done an on-ice game, you as Burke have to play a "Scrum". In this game, you are surrounded by the worst lazy questions the Toronto media can lob at you. By aggressively repeating the sequence of X B X Y, you make Howard Berger piss his pants and run out of the locker room. This gets you an ovation from your players and 1,000,000 extra points.

It's still early, but I''ve loved what I've seen and played. It'll be an exciting game to play for the next 9 months. Overall rating: 8.5/10.

* Rated 'T' for Truculence. Not available in Eastern Ontario.