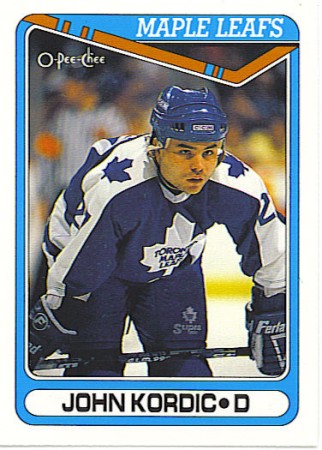 On November 7, 1988, I got home from school (I was in Grade 13, which isn't a joke - welcome to Ontario) and my mother told me, "Oh, the Leafs traded Courtnall to Montreal today."

This was no surprise.  Courtnall, a speedy winger who had led the Leafs in scoring two years earlier, did not get on well with coach John Brophy at all.  He'd fallen to 49 points last year under Brophy and this year had just two points in 9 games.  Something was coming and we all knew it.  (His scoring had been replaced in the early going by a Boston castoff named Dave Reid, who put up a point per game for the first dozen games, then changed his number from 34 to 14 and promptly fell off the map.  A good PK guy, he'd never score more than 30 points as a Leaf, although he once got four shorthanded goals in three games.)

"I didn't really hear it.  The name sounded a lot the same, though."

I started running through the Habs roster in my mind.  "Cor, Cor, Cor, CORSON!"

Well now, that was a pretty solid trade!  Corson was young like Courtnall and could play.  This was going to work out just fine!  I was pretty happy for the rest of the afternoon.

Of course, on the six o'clock news, I heard the reality.  It wasn't Corson, it was Kordic.

The next day, my Hab fan friends (a pox on both your houses!) were exultant and the Leaf fans were commiserating.  Kordic had been an all-star in junior, we told ourselves.  Maybe he can play a bit more than the Habs ever let him.

In truth, he could.  John probably could have been more of a player than he was ever really allowed to be.  In 1989-90, he'd score goals in 3 straight games and MLG just erupted, chanting his name over and over and over.  But there would be troubles, not the least of which was the team falling apart in 1990-91 and before that season was done, John was shipped to Washington with Paul Fenton for a fifth-rounder. (TWO players for a 5th!  Ye gads. That one was brutal.)

It was a lousy trade.

DGB, who we all love and whose blog would be my absolute favourite were I not busy being not paid to write for this one, takes the stand that this was in fact a good deal.

The crux of his argument is:

1 - the Leafs were soft, having only Curran as a real fighter.  Now, there were other players on that team who would go (Richardson, Iafrate, Leeman, Gill) but none were what you'd really call heavyweights and Richardson was only 19.  Wendel was in his perpetually-injured phase and really wasn't available.

2 - the Leafs played in the Norris, where you needed to fight at least 83 times per game, so long as there was no overtime.  Then it was 112.

3 - Courtnall was no superstar and was sucking eggs that year.  (No superstar, but he was a "top-6" (to use modern parlance) forward on any team in hockey other than maybe Edmonton, had speed to burn and was fun to watch.  Kitten-soft?  Sure.  Playing lousy?  You bet.)

The thing is - you can grant all his arguments and it's STILL a lousy deal.  The problem isn't that the Leafs had no use for Courtnall and they needed a Kordic - the problem is that they didn't get a proper return.  Courtnall was worth more than that.

If I'm at the grocery, and I need a cart and all I have is a toonie, I can trade my toonie to someone for a quarter and hey, I have my cart.  I've gotten rid of something that was doing me no good, I have what I need and Bob's your uncle, right?

Well, it's a great deal so long as you don't worry about the fact that I just traded a toonie for a quarter.

When the Habs dealt Courtnall, it was straight-up for Brian Bellows - a consistent 30+ goal-scorer who'd score 40 in 1992-93.  That's the level of player we were talking about here.  When Dallas traded Courtnall, they got a player, a prospect and a pick.

Kordic, a little over two years later, was a throw-in on a deal for a fifth-founder.

At the very least, the Leafs needed someone decent out of Montreal's system to go with Kordic.  They didn't get it.  The problem wasn't that Kordic sucked.  I don't think he did.  He just wasn't worth that kind of price.

(Now - I will say this - I looked at the comparable players in the Norris at the time and most could be had for a mid-round pick or a role player, or they were part of multi-player deals where it's hard to rate their value.  One deal stands out, though.  Calgary sent Brian Bradley, Kevan Guy and Peter Bakovic to Vancouver for Craig Coxe.  That's every bit as bad, if not worse.  At least Stellick didn't throw in a couple prospects with Courtnall.  Calgary then flipped Coxe to St. Louis with Mike Bullard in the Gilmour deal.  Nice recovery.  Beats half of a fifth.)

A tribute to John - that Leaf he's fighting at the start isn't Salming, it's Val James:

The HHOF take on John:

"A tough right-winger who could score more than most people realized, John Kordic was relegated to the role of an enforcer in the NHL. He spent parts of seven years in the NHL with four different teams before his untimely death at the age of 27.

Kordic played in 1981-82 with the Edmonton Knights of Columbus midgets. This was followed by four years in the WHL, three with the Portland Winter Hawks, and one with the Seattle Breakers. In 1983 Kordic was a member of the Portland team when they became the first American franchise to win the Memorial Cup. A few weeks later he was chosen 80th overall by the Montreal Canadiens at the NHL Entry Draft. The rugged forward was placed on the WHL West second all-star team in 1985 after scoring 81 points and playing a physically imposing game.

Kordic spent most of 1985-86 season with AHL's Sherbrooke Canadiens then played 18 playoff games as the Habs won the Stanley Cup. He joined Montreal for 44 games in 1986-87 and was chiefly an enforcer for the team until early in 1988-89 when he was traded to Toronto for Russ Courtnall. He struggled initially because Courtnall was a popular player and the Leafs were in turmoil. The next year he was given more ice time under coach Doug Carpenter and scored nine goals in 55 games.

After Toronto endured a miserable start in the 1990-91 season, he and Paul Fenton were traded to the Washington Capitals for a draft pick. Kordic played only seven games for the Caps before signing as a free agent with the Quebec Nordiques in October 1991. He played 18 games for the Nords before loosing his life in the summer of 1992." 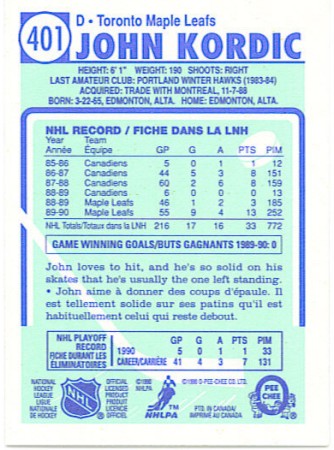