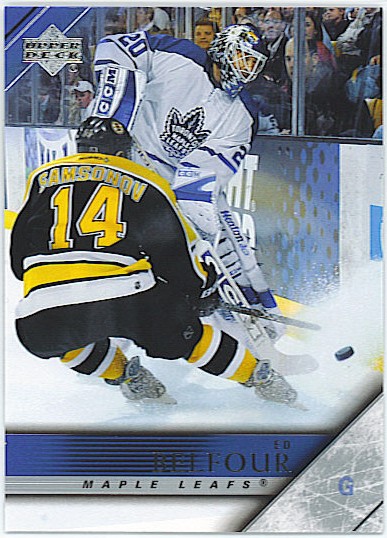 Watching the game Saturday night and seeing this great big goaltender in the Leaf net, covering everything so effortlessly and looking like he really knew what he was doing, I felt this odd thing in the pit of my stomach.  As with most of these things, it was probably gas, but it actually felt a bit like hope.  It's been a long time, so I'm not really sure.

I know that it's pretty much the thing to do at the moment to throw Vesa under the team bus, but I did want to mention another goalie who was brutal in pre-season and worked out all right.  I think we all remember that story.

When Joseph left the first time, it left a pretty lousy taste in many people's mouths.  The Leafs signed Ed Belfour a day or so later, which for me didn't do much to wash it out.  I'd never been all that fond of Belfour, mainly from endless Norris Division battles.  Yes, he'd won in '99 and had been pretty much stellar more often than not, but he was coming off a lousy year in Dallas and I wasn't too sure he had anything left.

His preseason play was brutal.  He quickly showed a nasty habit of getting beat by the first shot he'd face and he never looked anything close to being comfortable.  The Leafs looked hosed in net.

Then the regular season began, he pitched a 6-0 shutout at Pittsburgh and never looked back, winning 37 games.  He even showed that he could stone Ottawa, which was always fun.

I can't say I expect the same turnaround out of Toskala, but there's a precedent, at least.  Room to hope.

At least there are options this time around.

And this - just because:

The HHOF take on Ed:

"Ed Belfour will go down in history as one of the premier goaltenders ever to play in the NHL, but there is no denying he was a late bloomer. A native of Carman, Manitoba, Belfour was still playing Tier Two hockey for the Winkler Flyers of the Manitoba Junior League as an overage player back in 1985-86 when he was 21. From there Belfour accepted a scholarship to the University of North Dakota, where he first began to show signs that he had the potential of being a top-flight goaltender. He won 29 of 34 games and caught the attention of the Chicago Blackhawks scouting staff.

In September, 1987 Belfour, nicknamed "Eddie the Eagle" was signed by the Blackhawks to a free-agent contract. During the 1988-89 season, at the age of 23, Belfour appeared in 23 games, coming out of the gate with a rather unimpressive 4-12-3 official record and a 3.87 GAA. The following year Belfour suited up for 33 games with the Canadian National Team, and it was there that he once again showed signs of being a potential NHLer. Belfour won the starting job at Chicago's training camp and was the team's workhorse, playing in 74 games, winning 43. He was also rewarded with a spot on the Team Canada roster for the 1991 Canada Cup, although he did not play.

Belfour had quickly established himself as one of the top goaltenders in the NHL, based primarily on one good season. Eager to follow that up, Belfour did not disappoint in 1991-92, where he helped the Blackhawks advance all the way to the Stanley Cup finals before losing to the Pittsburgh Penguins. Belfour had also become known for his spirited personality, which one more than one occasion seemed to directly clash with that of fiery head coach Mike Keenan. Media members and fans alike often sat on the edge of their seats in anticipation of Belfour's reaction at being yanked out of the net by Keenan, which happened with regularity. Although Belfour often seemed at odds with Keenan, and some teammates, he always produced on the ice, which was all that really mattered.

The Belfour days in Chicago came to a surprising end in January, 1997, when he was dealt to the San Jose Sharks when it became apparent the two sides were not going to be able to work out a new contract. He remained with the Sharks for the duration of the 1996-97 season before signing a free-agent deal with the Dallas Stars. Belfour played in the Lone Star State for five years, and led the organization to its first Stanley Cup title in 1999, beating the Buffalo Sabres in the finals. Belfour remained the Stars' number one netminder through the 2000-02 season, but a dismal year for the team and a record of 21-27-11 record for Belfour left the Stars out of the playoffs and it was apparent changes were in the offing. Although the NHL season was a downer, Belfour was a member of Canada's gold medal winning team at the Salt Lake City Olympics. During the summer of 2002, Belfour inked a multiyear contract with the Toronto Maple Leafs, replacing the departed Curtis Joseph as the team's number one netminder.

Upon his arrival, Belfour continued his solid play in goal helping the Maple Leafs earn 2nd spot in their division while earning his 400th win with the club in early April. The following season, Belfour would lead the team once again into the playoffs where he would shutout the Ottawa Senators in three consecutive playoff games in the first round. The Leafs would then lose to the Philadelphia Flyers in the next round.

In 2005, the netminder surpassed Terry Sawchuck for second place in all time wins by a goaltender, however finished the season with a lackluster .500 record on a Leaf club that failed to make the playoffs for the first time in seven seasons. In the 2006 off-season, Toronto Maple Leaf General Manager John Ferguson released Ed Belfour. The veteran netminder would sign with the Florida Panthers where he would split his time with Alex Auld in goal. During that season, an injury to Auld allowed for Belfour to regain his form and post a 2.79 GAA and .902 save percentage while going 27-17-10 in the crease. After his time in Florida, Belfour signed as a free agent with Leksands IF in the Swedish second division.

Belfour wears number 20 as a tribute to former Russian goaltending great Vladislav Tretiak, who coached Belfour in Chicago in the 1990s." 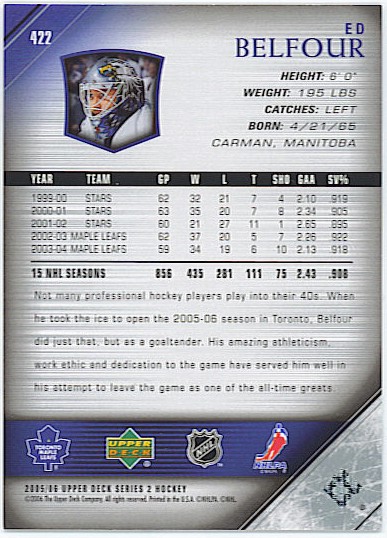