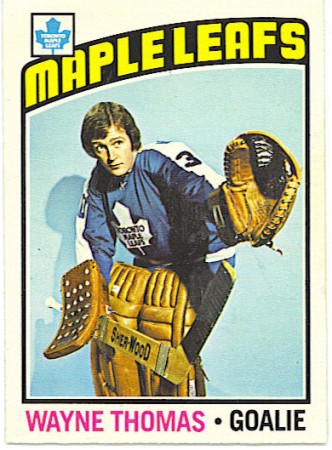 If yesterday (Ed Belfour) respresented what I hoped could happen for Vesa Toskala, today represents more of what I actually expect.

Wayne Thomas, like Vesa, came from an organziation with too many goaltenders.  He'd been Ken Dryden's replacement (one of them, anyway) in 1973-74, but with Dryden's return, found himself not playing at all in 1974-75.

Toronto got him prior to the 1975-76 season in exchange for a first-round pick (again, shades of Vesa).  He actually played quite well for them that season, winning 28 games and taking them to game 7 of a really nasty playoff series against Philadelphia.

He struggled a bit in 1976-77 and found himself playing second fiddle to a hotshot rookie by the name of Mike Palmateer.  By the end of the season, he was waived and finished up as a New York Ranger.

Ron Wilson today reiterated that Vesa Toskala still has the starter's role, but that there are going to be serious challengers this time around, and if he's not up to it, then playing time will be handled differently than last year.

So - Belfour or Thomas?  We'll see how it plays out.

This is actually a really ugly video of Mel Bridgman of the Flyers attacking Borje Salming in Game 3 of the 1976 quarterfinals (Bridgman would end up with criminal charges - later dropped - out of this game).  The goalie standing there not doing much of anything is Wayne Thomas.  Nice mask, though.  The Leafs appear to have four defensemen on the ice for whatever reason - Salming is 21, Turnbull is #2, Neely is #3 and McKenny is #18.  (Neely and McKenny both did shifts as forwards, so presumably that's what's up here.)  The other Leaf is #10, George Ferguson.  I'd show something else, but youtube Leafs clips from 1975-76 seem to consist solely of playoff brawls with the Flyers.

The HHOF take on Wayne:

"Netminder Wayne Thomas made nearly 250 appearances for three different teams in the 1970s and '80s. He was a solid stand up goalie who was a workhorse in Montreal and Toronto during the mid-'70s.

Born in Ottawa, Ontario, Thomas played two years with the University of Wisconsin and was named to the WCHA second all-star team in 1970. The L.A. Kings prospect was traded to the Montreal Canadiens and spent parts of three years developing in the AHL. He made a few appearances late in the 1972-73 season when Ken Dryden was rested before the playoffs. The young netminder played 42 games for Montreal when Dryden left to study law but was never able to gain a stranglehold on the first string position.

After sitting out the 1974-75 season, Thomas was acquired by the Toronto Maple Leafs. He enjoyed his finest NHL season with 28 wins and selection to participate in the NHL all-star game. In 1976-77, Thomas struggled with his consistency and was superceded by rookie Mike Palmateer. He was placed on waivers at the start of the 1977-78 season and subsequently picked up by the New York Rangers. Thomas played four years with the Blueshirts before retiring in 1981." 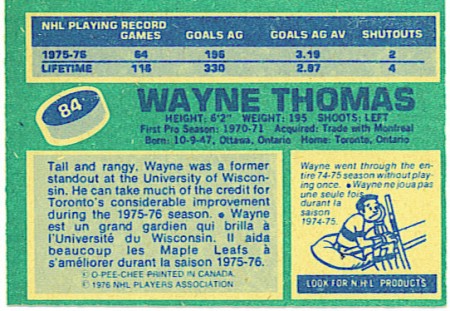