IT'S THE LEAFS' SEASON OPENER EVE!!!

Share All sharing options for: IT'S THE LEAFS' SEASON OPENER EVE!!!

ARE YOU READY FOR SOME HOCKEY?!?  I KNOW I AM.  I'M HAVING TROUBLE CONTROLLING THE SOUND..err, I'm having trouble controlling the sound of my voice, that is.  Man oh man I am SO excited!

I got my jersey over a sweet new Leafs tee, my Leafs hat is on.  i'm rocking my Leafs flip-flops, wearing Leafs boxers and I'm typing while wearing my Leafs foam finger. 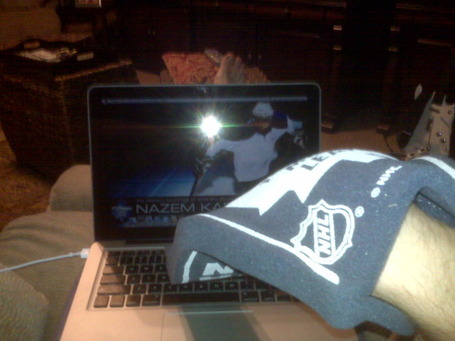 Do you have any idea how long it took to type this wearing that thing?

So, all things considered, I think I'm just about ready.  I've been a good boy (mostly) this summer, and it sure seems like Burkie Claus got just about everything on my wish list.  Ready or not, hockey's almost here...

Special thanks to kidkwartha and Kim Jorn for getting me ready for the season, attire wise.
Chemmy Edit: