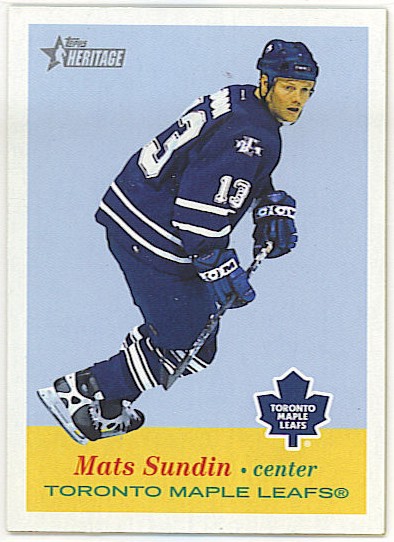 Sometimes the LotD just chooses himself.

With Mats Sundin retiring in his typical understated fashion it finally closes the book on an excellent career.  For the Leaf fans who found themselves split in their reactions to his departure it allows the healing process to really begin.  Now we all can start gearing up for the moment when #13 joins all the other numbers in the rafters of the ACC where it belongs.

I also find it kind of fitting that the Sundin era is closing just as a couple of new Swedes appear poised to take this city by storm.  If Stalberg and Gustavsson can come close to Mats' contribution to this team the Burke era will be a very enjoyable one.

I was among those who was crushed by the departure of Wendel Clark in the summer of 1994.  Wendel had defined the late 80s and early 90s for me and to see him leave town just as he appeared to finally be getting healthy and getting his game in gear was terrible.  As a result, it took a little time to warm up to Mats, who in so many ways was the anti-Clark.  Where Clark was all emotion, effort and reckless abandon, Mats' stocism took a little getting used to.  Over time, I really came to appreciate his combination of skill, strength and resolve.  He was a force in the Leafs' playoff runs, playing through various injuries and always finding a way to deliver.

On the international stage, his gold medal in 2006 showed he could lead a team to a championship.  Such was his stature in Sweden that even on teams with stars like Forsberg and Lidstrom, Mats was always the captain.  It was automatic.

Mats retires as the Leafs all-time leader in both goals and points, trailing only fellow Swede Borje Salming in assists.  Borje was interviewed on the FAN today and asked about who he felt the greatest Swedish hockey player of all time was.  Borje didn't hedge at all.  It was Mats.

A great player and a great captain.

Good luck in retirement, Mats.  Don't be a stranger.

The HHOF take on Mats:

"Mats Sundin has gone on to become an ambassador for Swedish sport, unarguably one of the most popular Swedish sportsmen ever. But there was a time when Mats Sundin was banned from Swedish hockey. There was even a time when controversial Swedish Ice Hockey Association boss Rickard Fagerlund promised he'd see to it that Mats Sundin never again played in a blue and yellow jersey.

That was a decade and three World Championships ago. In 1991 in Helsinki, in 1992 in Prague and in 1998 in Zurich, Sundin led the proud Tre Kronor to gold medals in competition with the best the world could offer.

After winning the Swedish title with Djurgarden and competing successfully with Tre Kronor in the Bern World Championship, Sundin left for North America without further notice in the summer of 1990. At that point, he had become one of the all-time greats in Swedish hockey. Only two players besides Sundin have won three World Championships, Jonas Bergqvist of Leksand and the legendary Sven Tumba, a 1950s and 1960s star with Sundin's Djurgarden.

Mats Sundin and countryman Peter Forsberg are currently two of the dominant players on the world hockey stage. Since a very quick decision made when Sweden needed reinforcements for the 1991 championship team, Fagerlund has had no reason to regret his decision to let Sundin back into Swedish hockey. It was only a year earlier that the 19-year-old Sundin had "defected" from Djurgarden to try his luck with the Quebec Nordiques, the team that in 1989 chose Sundin as their first pick. Sundin became the first European ever to be chosen first overall in a draft.

Sundin left Sweden under a barrage of fire and slander from various hockey personalities. His decision was hard to fathom. But passions cooled and Mats Sundin was invited to return home in time to play with the national team in Ebo and Helsinki. Sundin was an instant smash hit when he single-handedly won the trophy for Sweden by scoring the most important goals of the tournament. He scored three goals in the game against archrival Finland (4-4) and then the decisive goal against Russia (2-1) in the finals. In all, he registered seven goals in the tournament.

He put in the same kind of performance in Prague in 1992. Accompanied by a team with 17 rookies among them Peter Forsberg, then a 17-year-old hockey wonderkind from MoDo Sundin played at his best. He scored a very important goal in the 2-0 game against Russia that propelled Sweden into the final game against Finland. Sweden won 5-2, securing its second World Championship trophy in two years.

And in Zurich in 1998 came the third trophy for Sundin, who was once again one of the most valuable players on the team.

After being traded to the Toronto Maple Leafs in 1994, the young Swede became a smashing success. In just one year he rose to stardom in a city well known for its taste for fine hockey and fighting spirit. He won the honor of being named the team's captain, the first foreign captain in the history of the Maple Leafs.

Since joining the Toronto Maple Leafs in 1994, Sundin has enjoyed a number of accomplishments while leading the club in scoring for each year except one. In 2002-03, he became the first Swedish born player to reach 1,000 points at the NHL level, and as of 2006-07 he has more career goals, assists and points than any other Swedish born NHL player.

In Sundin's thirteenth season in Toronto, the nine-time all-star tallied 32 goals and re-wrote the Maple Leaf record book. After breaking Darryl Sittler's team record for all-time goals scored in a Leaf sweater, Sundin took sole possession of the club's all-time lead for points scored. During that same season, the Leafs quickly fell out of playoff contention and Sundin became the focus of numerous rumours as the trade deadline neared. However, Sundin didn't believe in being a "rental player", and subsequently refused to waive his no-trade clause built into his contract. Sundin became a free agent on July 1, 2008 and the Vancouver Cancuks promptly offered the former Quebec Nordique a two-year $20-million dollar contract. The Maple Leafs, Canadiens, and Rangers also offered contracts to Sundin, who took until December, 2008 to make his final decision.

On December 18, 2008 the Vancouver Cancuks announced that Sundin had signed with the club. His two-year $20-million dollar contract made him one of the highest paid NHL player at the time of the signing.

In international compeition, Sundin is recognized as being one of the elite players in the hockey world. He has represented his homeland at 14 international competitions, has one Olympic gold medal, and won gold in three World Championships. Sundin has held the position of team captain for the national squad for the better part of the last decade." 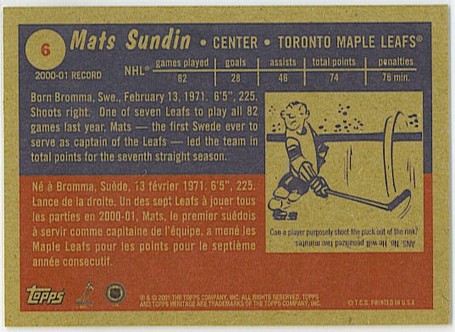