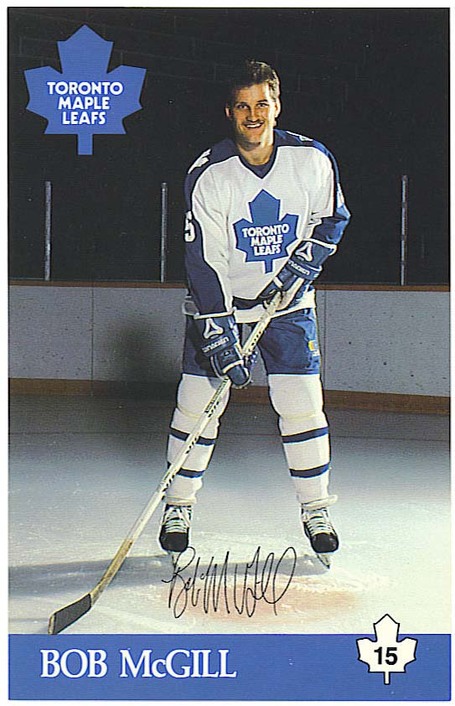 There are a number of benefits to being the guy who writes the historical bits on this site.  For example, when there are 20,000 stories and posts out there dealing with Luke Schenn and his second-year troubles, I don't particularly have to respond with one of my own (besides, how many different ways can one say, "He's 20.  Wake me up if he's still struggling next year?")  The other benefit is that when the current team is playing like a bunch of clowns, I don't feel particularly obliged to talk about it.

I didn't make the Schenn comment above particularly because it's Bob McGill today, but it's apt.  Bob is the second of the young defensemen supposedly ruined by being brought up too soon by the Leafs in 1981-82.  Jim Benning was LotD back in November and by 1984-85 Freddie Boimistruck was off to the minors, never to return.

Like Schenn, Bob was a nineteen-year-old, tough defensive defenseman with pretty sound junior credentials.  He played a full season at 19 and then had a rotten second year (far moreso than Schenn).  He'd end up in the minors that second season and would spend most of the following one there as well.

But was he ruined?  Hardly.

A lot depends, I guess, on what you consider the expectations would have been for Bob McGill versus what actually happened with him.

Bob was a second-rounder in 1980.  At that time, he was coming off a 21-point, 230 penalty-minute season with Victoria of the WHL.  In 1980-81, Victoria went all the way to the Memorial Cup (note - Bob actually spent a full season post-draft in junior) and Bob put up the best offensive numbers of his career.  Still, I don't think the expectation was that he'd put up numbers like that in the NHL.  He was to play hard-nosed, physical defense.

In 1984-85, after that time in the minors, Bob actually led the Leafs with that plus-minus rating of zero.  For a guy who only put up five points on a team that gave up goals the way the Leafs did, that's really not bad at all.  For the rest of his career, he never really stands out as any kind of liability.  (Remember, that -34 is for a first-year expansion team.)

After leaving with Thomas and Vaive in the Olczyk trade, Bob wandered around a bit.  Post Hawks and Sharks, he did the mandatory Detroit stint.  (I'm not making this up - it's some unwritten rule that every Leaf defenseman must suit up in a least one game for Detroit.)  Then it was a surprise move back to Toronto.

The 1992-93 season was so full of stories that I tend to forget that one of them was the return of Bob McGill.  I have a vague memory of him getting that one goal.  (It's good that I remember that, because otherwise the only thing I really recall was Bob hacking Kelly Kisio in the back in '85-86, getting pitched for "deliberate attempt to injure" and winding up with a seven-game suspension.)  He was injured twice and ended up missing out on the playoffs.  Could have been useful to have had him keeping McSorley and the rest of them honest.

Bob McGill came into the league as a young, tough defensive defenseman and spent 705 games doing just that.  By my count, 607 of those came after the Leafs supposedly ruined him forever.

Don't believe everything you hear. 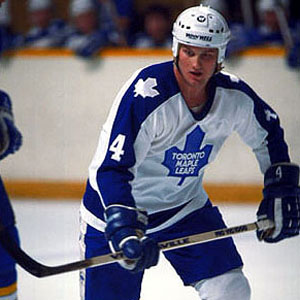 Young Bob - via www.legendsofhockey.net
A Bob McGill tribute with a couple Leaf moments.  I think that goalie is Vince Tremblay:

- Traded to Chicago by Toronto with Steve Thomas and Rick Vaive for Ed Olczyk and Al Secord, September 3, 1987.
- Claimed by San Jose from Chicago in Expansion Draft, May 30, 1991.
- Traded to Detroit by San Jose with Vancouver's 8th round choice (previously acquired, Detroit selected C.J. Denomme) in 1992 Entry Draft for Johan Garpenlov, March 9, 1992.
- Claimed by Tampa Bay from Detroit in Expansion Draft, June 18, 1992.
- Claimed on waivers by Toronto from Tampa Bay, September 9, 1992.
- Signed as a free agent by NY Islanders, September 7, 1993.
- Claimed on waivers by Hartford from NY Islanders, November 3, 1993.


the HHOF take on Bob:

"During the early 1980s, the Toronto Maple Leafs were a team in distress. There need for defensemen was so urgent that they rushed many into the NHL before learning their position properly, possibly damaging their careers permanently. One such prospect was Bob McGill.

Drafted by Toronto in 1980, the 19-year old defenseman was playing in the NHL full-time in 1981-82. Trying too hard to prove his worth, McGill gave away the puck frequently and got meaningless penalties. As a rookie, Bob McGill sat out 263 penalty minutes. But a couple of trips to the Leafs AHL franchise in St. Catharines settled McGill down.

By 1984-85, he returned to Toronto full-time. His 250 penalty minutes again proved that he was no contender for the Lady Byng, but he played within his range and the maturation was noticeable. After six seasons with the Leafs organization, Bob McGill was dealt to Chicago with Steve Thomas and Rick Vaive, while Ed Olczyk and Al Secord joined the Leafs.

Between 1987-88 and 1990-91, McGill was a valued Hawk, but was left expendable in the 1991 Expansion Draft and was chosen by the San Jose Sharks. The next three seasons must have been a blur for him as he played with the Sharks and Red Wings in 1991-92, was drafted by Tampa Bay, but claimed on waivers by the Leafs the next season, then spent 1993-94 with the New York Islanders and Hartford Whalers." 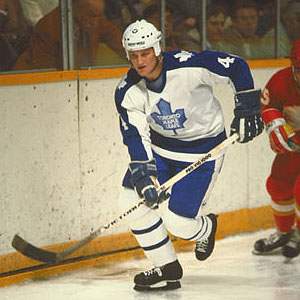