On the retirement of Curtis Joseph

Share All sharing options for: On the retirement of Curtis Joseph

Editor's Note: Relive CuJo's last hurrah against Washington or his biggest save on Alexander Ovechkin. Be sure to check out two of DGB's posts: Mike Foligno's kick to the head and Wendel Moment # 12 - CuJo's decapitation. You can watch the Curtis Joseph retirement press conference at MapleLeafs.com

Heading into the first round of the 1989-90 playoffs, the Leafs had good reason to be confident.  Yes, they had drawn St. Louis, who had actually finished three points ahead of them and thus had home ice, but the Leafs had gone 7-1 against the Blues that season and lit them up like Christmas trees.  They should have been sitting pretty.

The one loss they had was a Feb. 6 road game, the front half of a home-and-home.  A kid named Curtis Joseph beat Jeff Reese 6-4.  It was his second NHL win.  (The Leafs smoked the Blues 7-1 in the back half.)

St. Louis had really been banking on another kid goalie named Vincent Riendeau.  He had a couple of years under his belt and seemed to be the favoured one.  I liked him because the Leafs could handle him.  He was, well, compliant.

As the playoffs began, though, it wasn't Riendeau in net.  It was Joseph and he was dynamite.  The Blues won the first two at home, then took Game 3 in overtime (shot from outside the blueline, anyone?) before the Leafs finally drew blood in Game 4.  Back in St. Louis for Game 5, the score was 4-2 for the Blues.  Joseph was stoning them again with about 9 minutes to go when somehow or other he got a shoulder injury.  I don't remember the play, but I do remember thinking that this was finally the Leafs' chance.  The demon goalie was gone, the much-friendlier Riendeau was in, and there was hope.

It wasn't to be, though.  The Leafs got one goal back, but nine minutes just wasn't enough and the Leafs were done.

It would take another two years - and the recovery from a season-ending knee injury in '90-91 - before reality was acknowledged and Joseph was finally crowned as the Blues' number one netminder.  By the spring of 1993 he was back to being a playoff wonder, stoning the heavily-favoured Hawks and scaring the blazes out of the Leafs.

Fast-forward half a decade to the summer of 1998, and Curtis Joseph is now the pre-eminent free agent goaltender available.  He'd led the Oilers to a couple of upsets, but Edmonton was in the throes of both a small market and a bad dollar and there was no way they were keeping him.

The Leafs were in a pretty sad state, but had a brand new coach in Pat Quinn.  Rather than expressing hope, the Quinn hiring had the local media types lamenting about the lost opportunity to try someone young and fresh, rather than just rehashing the same-old same old (note that things really never change in Toronto).

On July 15, though, Curtis Joseph signed a huge deal in Toronto - four years, $24 million - and the Leafs gained instant credibility.

With much the same group of players that barely eked out 69 points playing the left-wing lock, the Leafs became a 97-point team that led the league in goals scored.  The difference was that Quinn was able to turn his forwards loose, confident that the stops would be made when they needed to be.  Joseph would back the Leafs to four straight seasons of between 90-100 points, including the first  division title since 1963.

In the playoffs, the Leafs never failed to win at least one round and twice made it to the final four, largely on Curtis' shoulders.  In just four seasons, Curtis became third on the list for all-time Leaf playoff appearances and victories, second in playoff shutouts and fourth in GAA, just 0.02 behind Frank McCool.  His career playoff save percentage with the Leafs was .921.

The Leafs never seemed to find the kind of defensive play that would allow them to take the next step, and a visibly-frustrated Joseph refused to say whether he'd consider resigning in Toronto when his contract ended.  This, plus a rather unfortunate interview given shortly after he signed in Detroit, made him persona non-grata with many fans. [Editor's Note: Especially me. I cheered wildly as he failed in Detroit]

He came back, though, for a final tour of duty in 2008-09 that saw him earn his 450th career win and get the cheers that were his due.

Just as the Gilmour trade in 1992 made the Leafs a team worth talking about again, the Joseph signing was a real era-maker in Toronto.  He gave this team the kind of goaltending they needed to really be a factor.  It was Joseph that began the trend of playoff dominance over Ottawa, and he was the only one who could ever get the Leafs past Philadelphia.  New Jersey?  Not so much.  If the complaint, though, is that he could be outdueled by Martin Brodeur and the Devils, well, it's not much of a complaint.

In his last go-round with the Leafs, he entered the season needing just a single win for 450 in his career.  It took him until December 30 to get an OT win over Atlanta, then he tacked on another four for good measure.

A class act on and off the ice, Joseph also won the 1999-00 King Clancy Memorial trophy for his charity work, including the establishment of Cujo's Kids, a program that brought children with serious illnesses to a special suite at Leaf games, as well as Cujo's Room, a special room at Sick Kids Hospital in Toronto.

Thanks for the good times, Cujo.  Don't be a stranger.

Oh - and don't take it personally, but you really needed to get injured about five minutes sooner in 1990.  Just sayin'.... 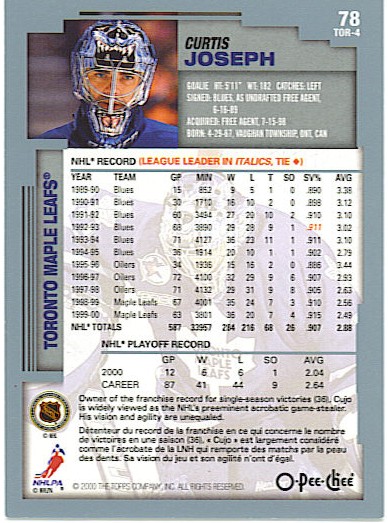 And this never, ever gets old:

(Normally - the rule is that you get to be the LotD just once in a given season, once every two years if I can get away with it (Wendel is a special case).  Today is an exception (be thankful - today was going to be Norm Aubin).  The other Cujo LotD story.)