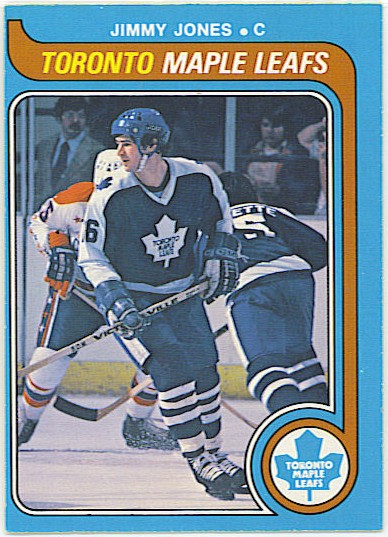 Jimmy Jones really wasn't about bringing the offense.  He had a couple of things he did really well - he could take faceoffs and he could kill penalties.  He was a guy who could go out there against the opposition scoring lines and not mess things up.  He was a role player who had specific jobs to do, as opposed to the current "role player" who seems mainly to be about playing smashmouth hockey and not a whole lot else.

Roger Neilson's teams could play defense - that was where a lot of their success came from.  Guys like Jimmy and Jerry Butler could go out there and shut things down so that the scorers - Sittler, McDonald et al - could do their thing and let the Leafs win.  This was the Neilson-era equivalent to the Zezel line of the 90s.

This team can't check their hats.

A lot of energy has been spent looking at who this team could get to centre the top line with Kessel.  While that's not a mistaken focus, what I really want Burke to do this coming summer is land a couple of Jimmy Jones types.  They don't have to be that expensive and imagine where this team might be if they could actually kill penalties.

Even a 78% kill rate would take about 17 goals off our total - probably not enough for a playoff spot at the moment, but it would still be within range.  Right now, that spot is looking more like a runaway dog in Saskatchewan.  You can still see it, but it's a good 40 miles off and probably isn't coming home.


the HHOF take on Jimmy:

"Born in Woodbridge, Ontario, just north of Toronto, Jones played three years of junior with the OHA's Peterborough Petes under Roger Neilson. Although he was a strong checker, Jones broke out with 37 goals in his last amateur season in 1972-73. His penalty killing technique was aided by all the time he spent with teammates Bob Gainey and Doug Jarvis. That summer he was selected 31st overall in the Amateur Draft by the Boston Bruins and was claimed by the WHA's Vancouver Blazers in that league's selection meetings. Jones played parts of two seasons for the Blazers then played two full years with the Rochester Americans of the AHL.

In the fall of 1977, new Toronto Maple Leafs coach Neilson encouraged management to sign Jones to be the club's checking pivot. After Jerry Butler was acquired from St. Louis, Toronto had themselves one of the top checking tandems in the game. Jones' strong work against the top scoring forwards on the opposition helped the Leafs record 92 points and reach the semi-finals for the first time since winning the Stanley Cup in 1967. The tenacious pivot enjoyed a particularly strong series in the first round when he stifled L.A. Kings star centre Marcel Dionne.

Jones played well in 1978-79 with regular linemates Butler and Pat Boutette but the team regressed in the standings. He only played one game in 1979-80 then finished out his career in the minors before retiring in 1981. The next year Jones moved into coaching when he was hired to guide the junior Toronto Marlboros, a posting that lasted two seasons." 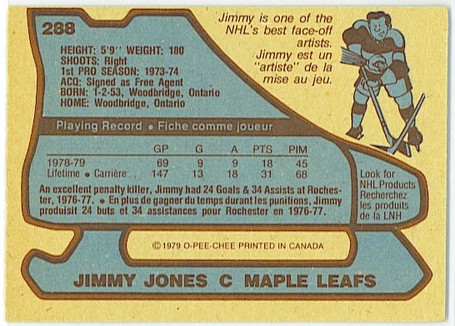