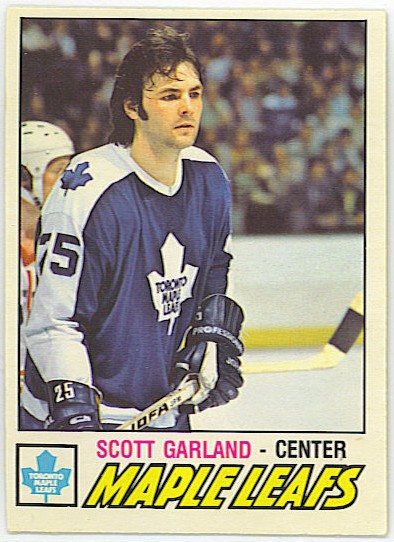 I was having a hard time picking a name for today.  I kept looking for someone that a) I had scanned and b) represented a good moment against Philadelphia and oddly enough, there are precious few of those.  I had Mike Hogan on the radio and he made mention that with the callup of Rosehill for tonight's game, it could be 1976 all over again.  That made the choice for me.

Toughness was the way of the game in the 1970s and everybody had a number of fighters in their lineup.  Even so, nobody was tougher than Philly.  Philly had beat (and beat up) the Leafs in the 1975 playoffs and they really had the Leafs' number.  Heading into their 1976 second-round matchup, the Leafs had gone 0-16-3 against the Flyers in their last 19.

I can't say that it was solely because of the the Flyers that Scott Garland got the call in the 1975-76 season.  All the same, I'm sure it was in the back of someone's mind.  While the Leafs also had guys like Tiger and Kurt Walker to handle the scraps (and Pat Boutette and even guys like Sittler, Lanny and Ian Turnbull would go if they had to), Scott's ability and willingness to tangle with the heavyweights got him into the mix.

The benefit of a guy like Garland was that he wasn't just a goon - he could play some and for a guy who really saw fourth-line minutes (maybe third in a pinch) he actually put up decent numbers - 13 goals and 36 points in 85 games along with just 91 penalty minutes - not exactly the totals of a guy who was just a thug.

The 1976 playoffs turned out to be a war.  This was the year Sittler put 5 goals past Bernie Parent in one game, but also the year Bridgman sandbagged Borje Salming and a number of Flyer players were charged with assault by Ontario Attorney General Roy McMurtry.  The Leafs/Islanders series of 2002 was a garden party compared to this one.

Garland, for his part, took on Dave "the Hammer" Schultz, who was on his way to setting an NHL record for penalty minutes in a single series.  He didn't win it, but, well, not that many people did against the Hammer (Gillies and Robinson were rare examples).

Over on HFboards, there's a wonderful summary of every game the Leafs and Flyers have played, complete with relevant video clips where available.  I have no idea how long this took to compile.  Here's their summary of Game 3 - April 15, 1976:

"the Leafs tied an NHL record with five PPGs en route to a 5-4 win in one of the most memorable games of the era. Toronto's head coach Red Kelly said "It was a miracle to beat that team." The Maple Leafs outshot the Flyers 52-28 and went 5-for-16 on the PP compared to the Flyers 1-for-3. Toronto scored two PPGs 29 seconds apart in the opening 3:54 of the second period to make it 4-1. After both goals, the Flyers were issued penalties. Philly scored twice in 13 seconds midway in the period to get within 4-3. Philly was whistled for 11 minors in the second period to the Leafs' one leading to a 27-5 shots advantage for Toronto. After two periods, Toronto led 5-3 and held a 44-16 shots advantage. Darryl Sittler had 10 shots on goal but just one assist. Bobby Clarke had a game-high three points. Bernie Parent made 47 saves; Wayne Thomas made 24 saves. The Leafs snapped an 0-16-3 skid in this series. Three Flyers were accused of assault by Ontario Attorney General Roy McMurtry who said "(It) bothers me that the Flyers don't have to play that way to win." Referee Dave Newell issued 42 penalties, four misconducts and 12 major penalties; one incident resulted in 163 PIMs. Little used Kurt Walker of Toronto received a gross misconduct penalty just 3:13 into the game as he and Dave Schultz fought. Afterwards Commissioner Clarence Campbell said "After all, the Maple Leafs set the standard of conduct for the game, bringing that Kurt Walker up. Before the game was a couple of minutes old (actually 3:13), Walker went out of his way to crosscheck Schultz so Toronto's intentions of how they were going to play were quite obvious." Philly established NHL records for penalties in a game (28) and in a period (17) and the teams combined to score six PPGs which also tied an NHL PO record. One bash spilled over into the crowd when fans spit and tossed ice at selected players. Four players were ejected: Ian Turnbull, Kurt Walker and Scott Garland of Toronto and Jack McIlhargey of Phily. McMurtry, the Ontario Attorney General, filed charges against Joe Watson and Don Saleski for common assault and dangerous weapons and to Mel Bridgman (on-ice lopsided fight of Borje Salming in an on-going attempt to limit hockey violence. The verdict was issued April 15, 1977 (see that entry below for specifics)."

Scott Garland played a full season for the Leafs in 1976-77 and was dealt to LA in 1978 after a year in the minors.  He was killed in a car accident during the summer of 1979 after having just six more NHL games with the Kings. 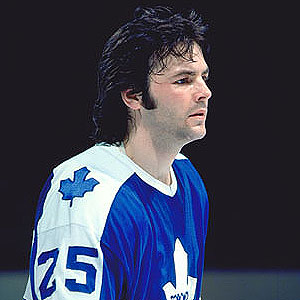 The hfboards Game 6 summary (same link as above):

"Darryl Sittler, scoreless in the PO entering the game, scored five times (5-1-6, 11 shots on goal), including two in 32 seconds to make it 4-1, and Ian Turnbull added four assists in an 8-5 win. Sittler's five goals tied Maurice Richard's mark in 1944 and his six points tied Dickie Moore (1954) and Phil Esposito (1969). The Leafs' Brian Glennie was hit in the jaw by a puck and required immediate surgery; he did not dress for Game 7. Wayne Thomas made 42 saves. Bernie Parent gave up eight goals on 39 shots. The Flyers outshot the Leafs 47-39. There were 43 penalties and 185 PIMs called (94 for Toronto, the most by an opponent in any Flyers' PO game). Dave Schultz (NHL record 42 PIMs) and Tiger Williams (34 PIMs) set Flyers' franchise records for PIMs in a game by a member of the team and by an opponent. http://www.youtube.com/watch?v=Fj901...eature=related After the game, a 65-year old Leafs' fan elbowed Schultz in the corridor near the Flyers' dressing room. Bob Kelly got into a clash with a fan and his tossed glove struck an usherette in the eye (about a year later, a Judge fined Kelly $200). Schultz-Scott Garland fought -- http://www.youtube.com/watch?v=_i5krW2h7xs "

the HHOF take on Scott:

"Scott Garland was not particularly blessed with an abundance of natural talent when it came to playing hockey, but his strong work ethic earned him a shot at the NHL. After playing major junior hockey with the Montreal Junior Canadiens and the Peterborough Petes of the OHA, he signed a free-agent pro contract with the Toronto Maple Leafs following a year in the CHL with the Tulsa Oilers. Garland showed a willingness to mix it up, compiling 195 minutes in penalties. The Leafs felt his tenacity would work well on the penalty-killing unit.

In 1975-76 Garland was called up to the Leafs for 16 games where he scored four goals and seven points while playing the wing on the team's fourth-line unit. In 1976-77 he played his only full NHL campaign, dressing for 69 games, scoring nine goals and 29 points.

In the summer of 1978 he was sent as part of a package deal to the L.A. Kings but played in just eight games with the team. The majority of his year was spent in the minors with the Springfield Indians.

Garland died on June 9, 1979 as the result of head injuries sustained in an automobile accident. He was 27." 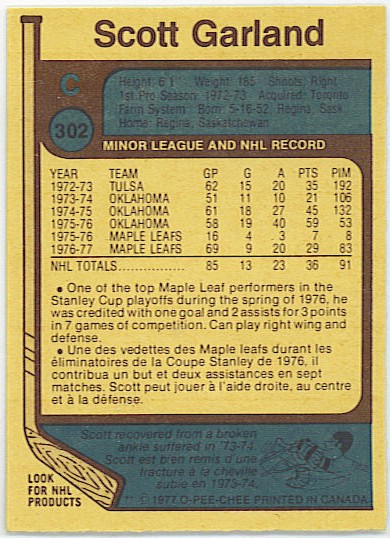