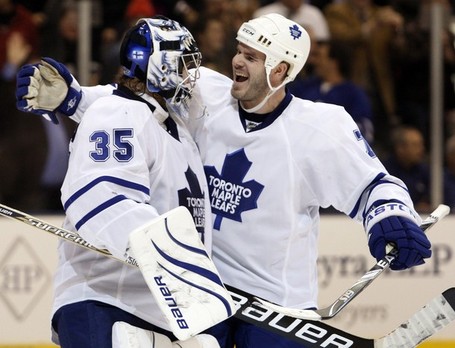 This is my long overdue look at just what it's going to take salary wise to get Ian White signed to a contract this summer.

A quick rundown of what I did; using the statistics engine at NHL.com and Behindthenet.ca, I developed a set of 5 different statistical ranges to compare Ian White to other defenceman in the league. I did this for both the first half of the 2009-10 season (all statistics are as of January 4, which meant every team had played about 41 games), and for the full 2008-09 season.

Using NHL.com, I've sorted all defenceman by Points per Game. Using Ian White as a midpoint, I've eliminated all D whose Points per Game production is not within 10%. This will form the basis of the comparison. (I've also excluded Bryan Rodney, Carl Gunnarsson and Brent Burns from this list because they all played less than 20 games to this point of the season.) This would leave us with the following Defenceman who scored between 0.45 and 0.55 points per game.

Two interesting things on that list; First, only Ehrhoff has scored more goals than White and has a better goals/game (Foster ties White). Second, of all these players, White has a very low percent of his points come from the powerplay. Look at some of those guys; 73% of Ehrhoff's points come with the man advantage, 67% for Del Zotto and Stralman. White's ES production is very strong compared to many of these guys.

Exhibit II - Time on Ice
Next, I've looked at the Time on ice stats for all the defenceman from Exhibit I. I'm going to narrow the list down by removing anyone who isn't within 15% of Ian White's ice time.

Suddenly, Ian White's low PP point total makes sense, since only Seabrook and Kubina play as little PP time as he does. Almost everyone on this list, except for those guys down at the bottom play around as much PK time as White.

Exhibit III - Defensive Production
There's more to being a defenseman than putting up points and taking up space on the ice; a Dman needs to be able to contribute in his own end as well. For this step, I've looked at everyone's totals for hits, blocked shots and giveaways. To take into account the fact that these stats are not as concrete as the other ones used, I've used 25% as the range, and to be excluded, a player had to fall outside that range in 2 of the 3 categories.
The ranges are as such; 23 - 39 hits, 50 - 84 blocked shots, and 29 - 49 giveaways.

The bolded numbers are where the person falls outside of the required range. We'll now exclude the following players, who fell outside the range for 2 of the 3 stats:
Kubina, Lidstrom, McCabe, Morris, Myers, Rafalski, Seabrook, Stralman, Timonen, Tyutin and Yandle.

I don't have much to add here, except White has the second highest giveaway total of anyone on that list, only behind current and future 9-time Norris winner Tyler Myers.

Exhibit IV - Experience and Salary
Part of determining a player's value for a contract is their age and experience. An older player likely receives a contract of a higher value because of UFA status, while a big portion of a younger players' contract is going to factor in the potential development of their skills. So we'll look at the ages, years of both pro and NHL experience, as well as their contract.

Incredible. I'm going to eliminate Streit and Beauchemin from further analysis because they are a few years older than the others, and also Ehrhoff because he has more experience. So we have four guys that are comparable to White in terms of offensive production, ice time, defensive production, age and experience. Now let's get into the fun numbers, courtesy of Behind the Net.

Let's step back for a second, because that's a lot of statistics to digest all at once, (and I still have a whole other set of numbers to talk about).

After half of a season, White has been scoring points at a greater clip than everyone except for Whitney, but he's scored as many goals as the four of them combined, and he barely scores any of his points on the powerplay. That seems relevant, since all of them play 3-4 minutes on the powerplay while White only gets about 1:30. That difference provides a good reason why White plays about 30 seconds to 2 minutes less than them.

Defensively, White registers more hits than Carle, about the same as Suter, and less than the two Anaheim guys. All five guys block roughly the same number of shots (all four were within the 25% range). Only Suter is considerably better with the puck; he has half the giveaways of White and the other three oddly enough all registered 31 over this period. All five guys are in their mid 20's, are in their 5th or 6th year in the NHL, and with the exception of White, they make between $2.75 and $4 million. Wisniewski is the lowest at $2.75, and he's also an RFA this year, so he could be expecting a raise as well.

Behind the Net puts White pretty much at the top for all four metrics; only Carle has a better +/-, and Wisniewski has a better Corsi rating and plays against slightly tougher competition. However, while Wisniewski's teammates haven't been great, White's quality of teammates is awful. He's the lowest of the five, and a couple of guys like Whitney and Suter have had much better teammates than White.

When you add all of that up, Ian White's agents have a pretty good case to ask for $3.5 million a year. Of course, the last thing we want is to get sucked into a contract year performance. Last season was when Ian White really started to blossom, so in Part 2 of this analysis, we'll look at the same stats from 2008-09.