Toskala Gets Shutout, Says: "I've Had a Laser Pointer in My Eyes For Two Seasons."

Share All sharing options for: Toskala Gets Shutout, Says: "I've Had a Laser Pointer in My Eyes For Two Seasons."

All right everyone, please settle down. I know it'll be difficult as we've all suffered an incredible blow. Obviously this morning we're still reeling from the shocking happenings at the ACC last night, or as I will now always refer to it, "The Events of 1/14.'"

Wins don't come easily to this Leafs team, and a win by shutout is the rarest gem in Leafs Nation. The timing for this one was perfect, as it stemmed another Toronto slide, and pulled the un-fastened fight-strapped jersey over the head of a creep filled Philadelphia Flyers team. Now just to make sure we're all on the same page here, let me take a quick poll: I want to see a show of hands of all you Leafs who played their best game of the season... Not so fast Ian White, you're always awesome. But to the other 19 of you, that estimation is pretty much spot on. Most unbelievably this also includes one V. Toskala. You may remember him from such opposition goals as 'the one a minute into the game', and 'the one a minute and a half into the game.'

Toskala, who in spite of his better judgment stopped all 38 Flyer shots, looked solid, calm and dependable. These words replacing the three adjectives I thought I'd be using to describe him when I heard he was the starter: "Horrendous", "Pathetic" and "Never Kissed a Girl". 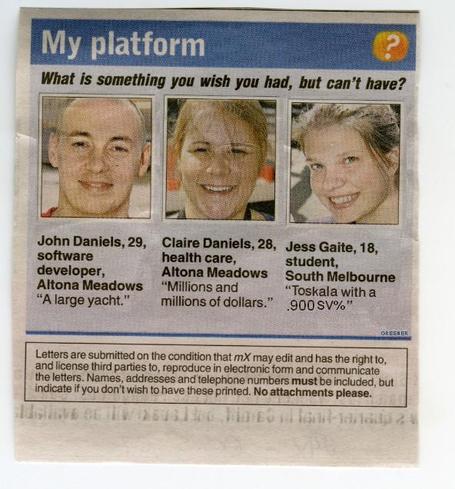 But for the very start of the game, Vesa didn't stray into those problem areas he all too often finds himself in: Playing too deep in his net, not challenging the shooter, not being able to catch anything, and inspiring despair in his teammates. He did everything he needed to do, and not once did it occur to me to slam my fist down onto my coffee table, a hilarious ritual I've taken up, coincidentally every time he's in net.

See below for the incredible first career goal by Ty Bozak, a kid who is sure to have a great career for another team. With that shot, not only did Bozak score the game winner, but he accomplished the best thing anyone has ever done in a #42 Leafs jersey. Ever. Ever. He also elevated the play of Kulemin and Kessel, and the first line had 5 points on the night, thereby doing everything that they needed to do. Great energy and enthusiasm from Jay Rosehill who had a "I'm so fortunate to be here!" way about him that perhaps became infectious. Other people fortunate to be there: Every other goddamn guy with a Leaf on his chest.

As much as we'd love to believe that Vesa would never hit us again, I'd advise everyone to be very cautious. Remember that when he came back from injury in November he played lights out great, just long enough for us to love him again. Did I say us? I meant me. What? This black eye? I just walked into a door, that's all!

Still, it was a great game, and one that we all deserved to be a part of. The Leafs were defensively strong, had balanced scoring, a perfect penalty kill, and next season Vesa Toskala will look great in a Florida Panthers uniform.