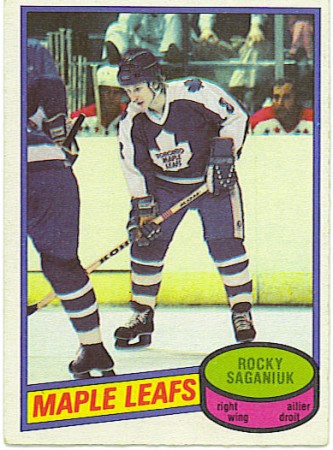 Sometimes in life, you just have to be duct-taped naked to a gurney and left for dead at centre ice.  It's a moral imperative.
I really wish sometimes that I knew another Rocky Saganiuk story, but unfortunately, I don't.  So I'll tell this one again - but not quite yet.

Over at Vintage Leaf Memories (a blog I really like), Michael Langlois suggests that Kulemin's career path is tracking somewhat like Lanny McDonald's.  I worry a little bit about "tracking" comparisons, because that gets us into VUKOTA territory and I remain rather unconvinced by that particular bit of technology.  To the extent that Kulemin looks to be a guy who is suddenly finding another gear at the NHL level, well, I'm all into that.

Anyway, the point isn't so much about Lanny or Kulemin so much as it is about another guy who looked to be the next Lanny McDonald.

This story came from Tiger Williams' biography, which I read about 20-odd years ago and from which I only remember about three things - including this.  Right after Christmas, 1979, Lanny was traded from the Leafs to the Colorado Rockies as part of Punch Imlach's war with Darryl Sittler.  Darryl had a no-trade, but Lanny didn't.  If Punch couldn't trade Darryl. he'd trade his best friend.

The Leaf room was a morgue.  Nobody could believe what had just happened.  Into the shocked silence, a rookie named Rocky Saganiuk announced that not to worry, HE would step in and replace Lanny.

It wasn't the best of moves.  The result was the moral imperative outlined above.

Rocky also took Lanny's number 7, probably not the best of ideas.  His career trajectory really didn't take off after that.

It's a shame, really, because Rocky - save for one moment of misguided bravado - is a pretty interesting story.  He's a guy who fought through a lot to make a pretty solid life for himself in hockey.

He was a little guy, standing only 5'8", but scrappy.  In his draft year, he scored 60 goals for Lethbridge while racking up 203 penalty minutes.  In his first year as a pro, however, he wound up with two cracked vertebrae from a hit and spent four months in a brace.

Still, he recovered enough that he was named the AHL's MVP the next season.  In his first full year as a Leaf, he played on a line with Laurie Boschman and John Anderson that was good enough to resurrect the old "Kid Line" nickname of the thirties.

The following years weren't as kind, though, as the team was sliding and he wasn't really on the scoring line.  He went to Pittsburgh, promptly got another back injury and it all but finished him as an NHL player.  He did radio work for both the Leafs and Pens and played a handful of AHL games.

By 1986, he was playing senior hockey for the Brantford Motts Clamatos.  Rather than packing it in, though, he went to England and got another decade out of pro hockey, both as a player and a coach.  He went on to youth hockey programs in Illinois once that was done.

Pretty good ending, all in all. 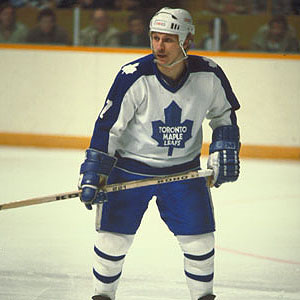 via www.legendsofhockey.net
This is fascinating in a "I have no idea what he's trying to do here" kind of way - unfortunately, you can't embed it.
An art gallery piece on Rocky Saganiuk

This one is a bit more traditional youtube fare:

the HHOF take on Rocky:

"Named after boxing legends Rocky Marciano and Sugar Ray Robinson, Rocky Ray Saganiuk almost didn't have an NHL career. After being drafted 29th overall by the Maple Leafs in the 1977 Amateur Draft, Saganiuk was cross-checked from behind, breaking the first and seventh vertebrae in his neck and causing the loss of feeling on his left side. This during a game with the CHL's Dallas Black Hawks in the 1977-78 season. With a name like Rocky, he refused to be off the ice for long.

After recovering from the hit, Saganiuk began the next season with the Leafs AHL farm team in New Brunswick. He was called up twice to Toronto, only to be sent back East. He led the AHL in goals that season with 47 and without missing the games he spent with the Blue and White he would have had a chance to break the goal scoring record in a season at the time of 52. Instead, Rocky was presented with the Les Cunningham Award as the league's MVP and was up with the Leafs to begin the next season.

His first full season in Toronto, 1979-80, saw Saganiuk paired with John Anderson and Laurie Boschman to form the famous "Kid Line." In the last 55 games of the season, the line was responsible for 60 goals. After scoring 24 goals and collecting 47 points in his first season, the next year saw a drop in production for Saganiuk. The 1982-83 season would see Rocky in only three games with the Leafs and an extended stay back in the AHL with the St. Catharines Saints ensued. The off-season saw him traded to the Pittsburgh Penguins where he was on the receiving end of a Craig Ludwig check that injured his back and required surgery.

After rehabilitation, the Leafs signed him to a contract as a free agent once again and began the season in St. Catharines with a full intention of making it back into the Leafs' lineup. He played only four games for the Saints when his bad back forced him to sit out the season and the next. After commentating for both the Leafs and Penguins on radio, Saganiuk laced up his skates again to play with the OHA's Senior League in the 1986-87 season. The league was compiled of ex-pros and junior players who never made it to the NHL, the majority of whom had full-time jobs but who were still looking to compete.

Saganiuk then moved to Britain for the 1987-88 season and played for the first two seasons and then became a coach, while playing in only a few games for several teams until 1995." 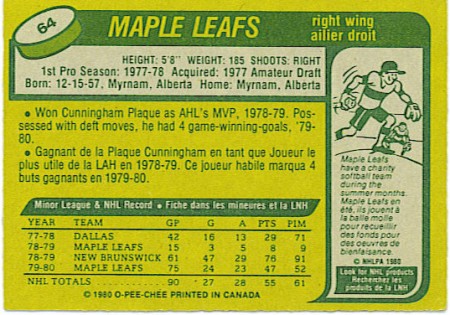