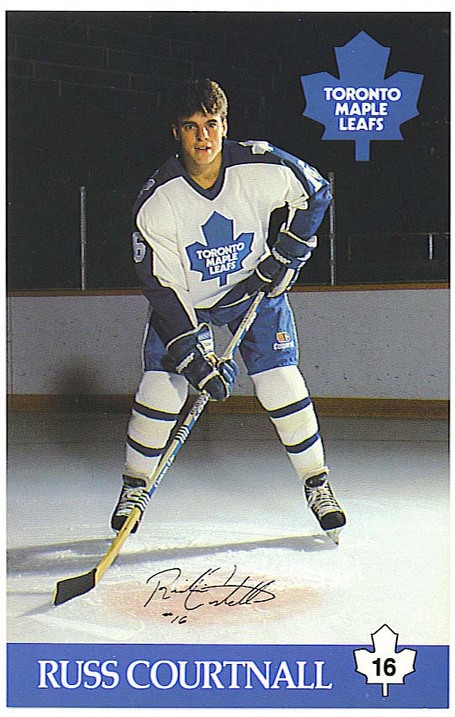 Kind of odd to see Russ Courtnall wearing number 16, but that's what he was wearing the first time I saw him play.  There are only a handful of images I have in my mind from that game, but one is of this kid streaking down the left wing boards and someone nearby saying, "That's our rookie."

The thing you noticed with Russ was always the skating.  He was really fast and he could skate with the puck.  He was creative, too.  Imagine a Kessel with more of a tendency to pass than shoot.  That was Russ.  It's not that he had a bad shot - he'd score as many as 29 goals with the Leafs.  His shooting wasn't his game, though.  He was the centre and he liked to dish.  Given wingers like Clark and Leeman, you'd dish too.

Defensive play?  Not so much, but remember that his Leaf career was all but done by 22.  He'd learn.

Physical?  Well, that was his undoing - particularly with Brophy.

Russ came to the Leafs late in '83-84 after playing for the Canadian Olympic team.  I have to say that overall I prefer the Olympics the way that they were - a bunch of juniors and guys you never really saw except for the Olympics (amateurs, remember them?) facing off against the Makarovs and Tretiaks of the world (guys who weren't really amateurs, but the world pretended they were).  They rarely won, of course, but that also meant the Canada Cup actually meant something - the real best against the best.

Russ's first full season was 1984-85, and it wasn't really a great one.  He showed all that speed but not a ton of finish and only ended up with 22 points.  He'd up that to 60 and then 73 in the next couple of seasons as we all got into loving the Hound Line.  That 73-point season actually led the team.  At age 21, he looked to be set for great things.

Great things for Courtnall, however, didn't really come in Toronto.  His relationship with coach John Brophy went south (that 73-point season actually came under Brophy, it wasn't always bad) as did his point totals.  Brophy wanted him to play physical hockey - the sort that Brophy himself had played.  It was something like asking Tomas Kaberle to take on the game of Garnet Exelby.  For Courtnall, he started producing the offensive numbers of an enforcer (less the PIMs, of course) and by age 23, he was a Hab.

The trade has been spoken of enough (my version is here, which links to DGB) and I won't do it again.

He's another who might have been nice to have around when the Fletcher era began, though.  Whether he played for those teams or was dealt, he'd have been a card to play. 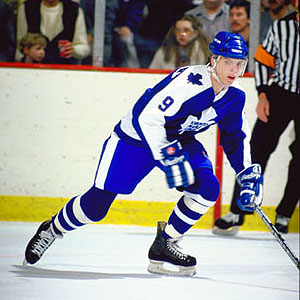 via www.legendsofhockey.net
Russ pots one and makes a couple decent rushes.  Thank goodnes for this clip - I've used it about 8 times:


the HHOF take on Russ:

"Coming out of junior hockey, Russ Courtnall was considered one of the top prospects in 1983 and the Toronto Maple Leafs selected him seventh overall in the Entry Draft

In 1982-83, Courtnall scored 36 goals and 61 assists for 97 points in 60 games. After being drafted by the Leafs, Courtnall appeared in just 32 games with the Cougars, scoring 29 goals and 66 points before being called up to the Maple Leafs, who were in dire need of scoring help at the time. As a rookie with Toronto, he scored 12 goals and 22 points in 69 games. Although his goal production was not as high as the Leafs had hoped for, his tremendous speed opened up opportunities, especially for his linemates.

In 1984, Courtnall also suited up for the Canadian Olympic team, which finished out of the medals at the Sarajevo Games. Upon returning, he rejoined the Maple Leafs. In 1985-86, Courtnall broke the 20-goal barrier, notching 22 to go along with 38 assists for 60 points. His offensive numbers improved the following year with 29 goals and 73 points, but he always seemed unable to please head coach John Brophy, who clearly preferred the big, rough-and-tumble type of players to that of Courtnall's speed and finesse.

In trying to force Courtnall to play a tougher brand of hockey, the club actually saw his offensive production decrease in 1987-88. With the Leafs braintrust clearly dissatisfied with their first pick of 1983, it was apparent Courtnall's days in Toronto were numbered. For a long time, head coach John Brophy tried to mold all his players into tough, aggressive fighting types, and players like Courtnall, could not play that way. After just nine games in 1989-89, the Maple Leafs dealt Courtnall to the Montreal Canadiens for John Kordic, who by all accounts was nothing more than a team goon. Although Courtnall's stock had clearly gone down tremendously, most observers felt Montreal got a steal in that trade.

As Courtnall joined the Montreal Canadiens, he was determined to prove to himself--fans and the Maple Leafs--that they were wrong about his value. In 64 games, Courtnall put up just 39 points with the Habs, but his lightning fast skating and breathtaking moves made him a fan favourite. Some said his style of play reminded them of Yvan Cournoyer of a generation before. Being more at ease with his new club, Courtnall saved his best performance for the playoffs, where the Canadiens advanced all the way to the Stanley Cup finals before losing to the Calgary Flames. In 21 post-season games, Courtnall contributed eight goals and 13 points.

Courtnall enjoyed another two-and-a-half years in Montreal before joining the Minnesota North Stars for the 1992-93 season. In 84 games, he managed a career-high 36 goals and 43 assists for 79 points. He followed that up with an 80-point season in the team's first year of play in Dallas. Late in the 1994-95 season, Courtnall was traded to the Vancouver Canucks where he teamed with his brother, Geoff, for 13 games that year. 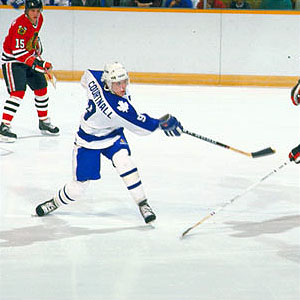