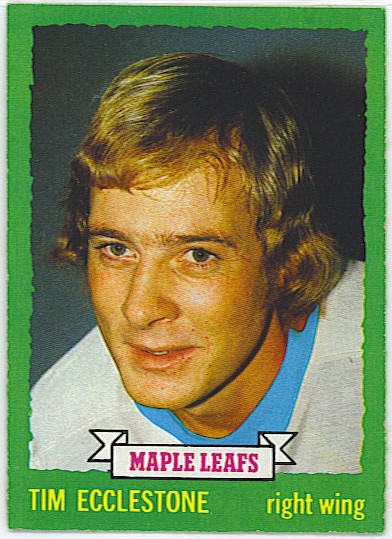 Before Atlanta got the Thrashers, any time that Calgary would go deep into the playoffs the CBC would head to Dixie to look up former fans or players and see what they thought about it.  When Atlanta got their new team and Calgary came to visit, they'd do the same.

One guy they'd often interview was Tim Ecclestone.  Tim had played for the Flames in Atlanta and became an assistant coach with them, but decided he'd stay put when the Flames went north, giving up a chance to maybe become an NHL head coach.  He's had a sports bar near Atlanta for years and has been a fixture in Georgia ever since the Leafs, Flames and Captials made him part of a three-way deal in 1974.

Tim was a Toronto kid who played his minor hockey in Etobicoke.  He was the ninth selection in the first-ever amateur draft in 1964.

He was a guy who made a living out of being versatile.  He could skate, check, play any forward position, kill penalties, play on the PP and score enough to keep himself in the league - sort of an early Lee Stempniak.

His Leaf stay was pretty brief - he had injury trouble the first year he was here and the Leafs had excess forwards and a shortage on the blue line in his second, so he only had 51 games in a Leaf uniform.  He put up 10 goals, 25 points and a plus 9.

There are a few little things about Tim Ecclestone that I found interesting and wanted to highlight here.  The first is that he is the nephew of "legendary Canadian softball pitcher Cam Ecclestone."  I found this interesting because I was not aware we had any softball legends.  (Note - that description was not taken from the blurb below, but from his hockeydraft profile.)

Further, it's interesting to hear that a guy wanted out of Detroit because of their persistent badness, and found Toronto an acceptable alternative.  Just sounds kind of neat to say that.

Third, he was part of two different trades for the same player.  When Rod Seiling was picked up by the Blues in the expansion draft, the Rangers sent a package to St. Louis to get him back.  Tim was part of that package.  In 1974, the three-way deal with Atlanta and Washington sent Ecclestone south, cash and a kid named Willie Brossart to the Caps, and Rod Seiling to Toronto.  Just one of those things.

Tim is on the wrong end of one of the more famous goals in history, but given that he wasn't really a big fighter, this is the only youtube clip I know of:


the HHOF take on Tim:

"Tim Ecclestone grew up in a sporting environment. His uncle, Cam, was one of Canada's greatest softball pitchers. But in spite of his baseball heritage, young Tim opted for the sport of hockey.

On his way up to the pro ranks, he played Junior B with the Etobicoke Indians. Surprisingly, in 1964, at the age of 17, he was selected 9th overall by the New York Rangers. He carried on with his junior career, however, skating for the Kitchener Rangers until 1967. It was at that time that the fledgling St. Louis Blues traded for his rights along with a handful of other recruits. Ecclestone had a reasonable degree of success during his three-plus seasons with the club. He potted a modest share of points each year, especially during the playoffs, and covered his own end with a competent touch.

By 1970-71, the Blues' management became unhappy with Red Berenson's alliance with the NHL Players' Association. Ecclestone dabbled with the collective as well and, as a slap on the wrist, received a one-way ticket to the Motor City. With the Wings, he enjoyed the club's chemistry but grew to hate the fact that the team was a perennial loser. By 1973 he had had enough. He requested a trade that was accommodated with a transfer to Toronto.

With the Leafs Ecclestone was unable to establish any kind of momentum, thanks, for the most part, to shoulder and rib injuries that kept him on the sidelines. As a result, his rights were traded to the Washington Capitals who, in turn, passed him along on the same day to the Atlanta Flames.

In Georgia, Ecclestone found a role for himself as a veteran forward who was sufficiently versatile to fill gaps wherever they emerged. He kept up the pace until he injured his knee in 1978. At that point the club recruited him to serve as an assistant coach?a position he maintained until the club moved to Calgary." 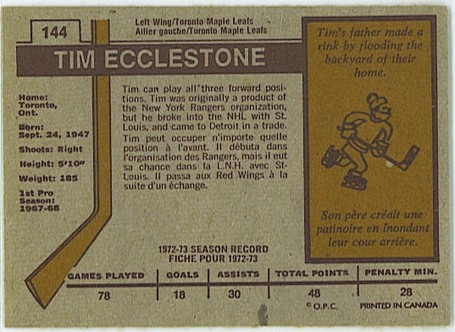