Share All sharing options for: The Leafs in Autumn - The Coolest Leafs Book in the Entire Universe

I was talking to PPP earlier about cutting back on the Leaf of the Day series so that I could periodically talk about other things.  I had another history series I wanted to do and it's nice periodically to shake things up a bit.  So the LotD will drop to the '84-85 Leaf on Mondays, a standard one on Fridays and also on game days depending on my mood.  Off days will now be freed up for other subject matter.

One of the things I wanted to talk about are hockey books.  There is a lot of great writing out there and I'd like to highlight some of it.  Now, I'm not on any publisher's mailing list (yet???), so it's not as though I'll be reviewing anything brand-new on the shelves unless I spend all my lunch hours skimming pages at the local book shops (not that that's a bad idea, though).

Of all the hockey books I've read, only one is allowed to be my favourite, and it is this one: 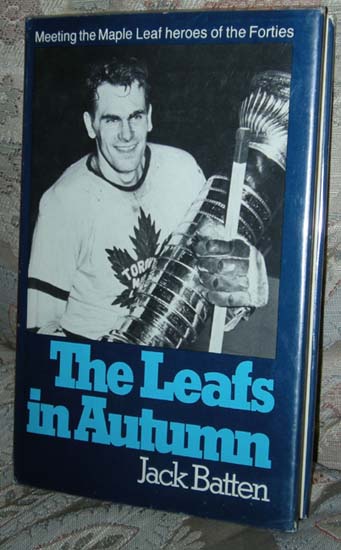 This is The Leafs in Autumn, by Jack Batten.

Jack Batten grew up as a Leaf fan in the 1940s.  His late teen years coincided with the great teams of the Apps/Kennedy/Barilko era.  For all the attention given to the teams of the 1960s, for my money the Leaf teams of the 1940s were the greatest of all.  Those teams won six Cups between 1942 and 1951, and became the first ever to win three straight.

Jack grew up to become a lawyer, but there was an inner writer trying to get out.  He began writing pieces on a number of subjects, but the sports stories were closest to his heart.

In 1969, Jack penned a book called Hockey Dynasty - the fascinating history of the Toronto Maple Leaf Hockey Club and the Conn Smythe Racing Stable.  By his own admission, it wasn't all it could have been and he set out to do it again, and this time, do it right.

For this book, instead of interviewing Connie Smythe as he had done previously, he set out to interview as many of the players as he could reach.  Barilko and Broda had passed on and a few others were nowhere to be found, but the list of players he did find reads as a who's who of Leaf hockey.  Among others, he met Apps, Bentley, Kennedy, Meeker, Mortson, Ezinicki, Gardner, coach Hap Day and an interesting farmhand named Phil Samis.

Rather than telling the story as a single narrative, each interview stands on its own, with each player reflecting on their time as a Leaf, what it was all about and what it meant.  He looks at how they've progressed in the quarter-century since.  Given that a lot of these players are now very elderly if they're with us at all, hearing from them when still in the prime of life is a real treasure.  It gives a lot of insight into a period we don't really hear of anymore.

First published in 1975, this book was probably nearing the end of its print run when I got my hands on it in about 1981.  It was in the dollar bin at a WH Smith's (a chain long since bought out) and I grabbed it.  I wasn't particularly a Leaf fan at the time, but as a hockey fan and a history buff (even then) it was right up my alley.  More than anything, this book made me a fan of the history of the game.

By the first dozen times I had read it, I knew the forties Leafs as easily as any current player and I remember sitting down with my grandfather and talking about Apps and Broda and Ezinicki and actually knowing who he meant.

A couple of months ago, I decided that the teams of the thirties and forties would be the subject of my next history series and I went to look for this book.  Having moved innumerable times since 1981 and possessing any number of unopened book boxes, it quickly became apparent that it would probably be much easier to find a new copy than to locate the old one.

Even though this book has been out of print more or less forever, there were 20-odd copies to be found online.  I wanted one that still had the dust jacket on it, and one in partiuclar stood out.  I grabbed it right away.

It's a first edition and in pretty good shape, but that's not what's remarkable about it. 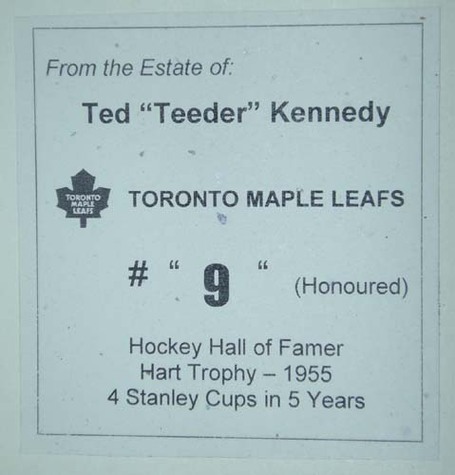 This is Teeder Kennedy's personal copy of the book.

I would imagine that everyone interviewed in the book was given a copy.  Too bad it's not signed by Batten himself - or by Teeder (or both, for that matter).  I once saw a biography of Nellie McClung in which Nellie herself had written notes in the margins.  Teeder doesn't seem to be the type to have done the same.  Just having a copy of a personally-relevant book owned by arguably the greatest Leaf captain, though, is pretty cool.

Interestingly, reading this book again now is a bit of a journey not unlike what Batten himself went through in these interviews.  I'm seeing the players I knew as a kid through the eyes of an adult, almost thirty years after the fact.  I'm relearning everything I thought I knew and getting an interesting perspective on it - one that's a little deeper and richer even if not quite as mythic.  That'll maybe come out in the history series once I get to it.

Jack has since written a number of other Leafs books among the 30-odd titles he's had published.  A lawyer by training, he's written crime fiction along with a number of biographies and works on local history (The Annex - the Story of a Toronto Neighbourhood looks interesting).  He writes columns on books for the Toronto Star.