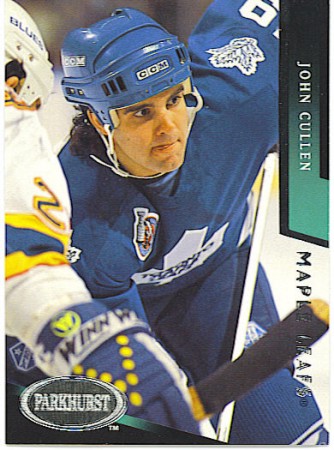 There are a million different "what-ifs" in Leaf history.  So much of 1993, for example, is placed on the high stick that wasn't called that another significant "what if" gets overlooked.

What if John Cullen had been healthy?

As 1992-93 was getting underway, it was pretty clear that the Leafs were going to have to do something to take some of the offensive load off Doug Gilmour.  This team needed a second-line centre with some real credibility.

Normally, a statement like "this team needs another scorer" is met with statements like, "Gee, that would be nice, wouldn't it?" and "pass the chips, please" and then a long, communal sigh because recognizing what the needs are and actually having them dealt with have always been completely different things.

In 1992, though, it was different.  Trader Cliff saw a need and then actually went out and addressed it - and got it right.  We weren't really used to this.  John Cullen was about as credible a second option as it was possible to get.  He'd been a 110-point guy playing behind Mario in Pittsburgh, was seen as valuable enough to go to Hartford for Ron Francis, and even in somewhat disappointing Hartford seasons as a number one, he was still a point-per-game guy.

This was, in a word, awesome.

Cullen came in and brought the offense right off the bat.  It would still take another deal in February (Dave Andreychuk) before that team really started to look like world beaters, having two complete scoring lines to go with the Berg/Zezel/Osborne trio.

Cullen was ticking along at about a point per game until later in the season when he started to get into trouble with his neck/back.  In the St. Louis series, he was playing with a collar on his neck, and he only ended up being able to dress for 12 of the 21 games the Leafs would play that spring, potting just two goals and three assists.  I don't remember him being there at all for the LA series.

It cost the Leafs that second option they had had and put almost the entire load on Gilmour, Clark and Andreychuk.  His offense would have helped and it might have lessened the load on Gilmour.  Would it have been enough to make the Final?  Who knows?

The next year it was more of the same as he was only able to get into 53 games and really wasn't right.  He'd sign in Pittsburgh in the off-season and Cliff loaded up on centres - picking up Mats Sundin and Mike Ridley.  Would that trade even have happened had Cullen been healthy?

Cullen was fairly healthy the next three seasons, though not quite the player he had been.  In 1997, he was diagnosed with non-Hodgkins lymphoma, which he was fortunately able to beat, though it cost him the last part of his career.

For me, though, and a lot of the other fans I knew, Cullen represented something pretty special - it was the first time that a Leaf team that had the potential to be pretty good actually took the steps to make it happen.  It actually gave us something to believe in.  It was a nice feeling. 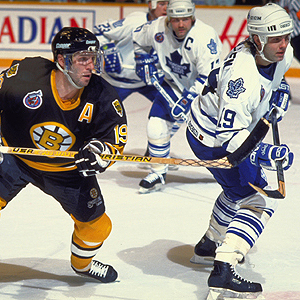 
the HHOF take on John:

"Maybe it's in the genes. John Cullen playing in the NHL was perhaps not that hard to imagine, given the fact his father and two uncles preceded him in doing so. Growing up in a hockey environment, young John began playing the game at the age of three. And, from an early age, his father and uncles made it clear that obtaining a proper education was extremely important. It was something they had not done, and wanted to be sure their children did not follow that same path.

With the thought of continuing his education after high school, Cullen had to resist accepting offers to play major junior hockey, which would have disqualified him from playing in college. After playing Tier II while in high school, Cullen enrolled in Boston University at the age of 19 in 1983. During his freshman year, Cullen was an immediate impact player, scoring 23 goals and 56 points in 40 games. That total went to 59 the next year before a 74-point season in his junior season. In each of his four years in the NCAA, Cullen scored over 20 goals and 50 points each season.

Cullen turned pro in 1987-88, playing in 81 games with the Flint Spirits of the IHL, filling the scoresheets with 48 goals and 109 assists for 157 points. He was named league MVP and was given a good long look at the Penguins' training camp the following year, which led to a starting spot with Pittsburgh. In his rookie season, Cullen appeared in 79 games, scoring 12 goals and 49 points. He followed that up with 32 goals and 92 points the next year. In 1990-91, he had the best statistical season of his career, scoring 31 goals and 94 points in 65 games with the Penguins before being traded to the Hartford Whalers with 13 games left in the season. He scored another eight goals and 16 points there to finish with a combined total of 39 goals and 110 points. In his one full season with the Whalers, Cullen contributed 77 points in as many games.

Midway through the 1992-93 season, Cullen was sent to the Toronto Maple Leafs. He helped lead the Leafs to the Conference finals where they lost a thrilling seven-game series to Wayne Gretzky and the Los Angeles Kings. During his time in Toronto, Cullen was saddled with an assortment of injuries, the most serious of which was a herniated disc in his neck.

Cullen signed with the Pittsburgh Penguins in the shortened 1994-95 season, looking to recapture some of that magic he had when he first came into the league. However, times had changed and Cullen was unable to produce to the satisfaction of himself or the team, scoring 37 points in 46 games and shortly after signed with the Tampa Bay Lightning in 1995, where he played for another two seasons before facing the biggest test of his life, a battle with cancer, in 1997.

Cullen underwent chemotherapy sessions and had bone marrow transplants. There were times he was so weak, he could barely walk around the block with his wife and their three-year-old daughter. Thankfully, Cullen successfully battled back from the non-Hodgkins lymphoma. Even more amazing, Cullen returned to play four more games with the Tampa Bay Lightning in 1998-99, wanting to prove to himself, and others, that he could do it. After playing a mere four games with the Lightning and another six games with the Cleveland Lumberjacks, Cullen decided to call it a career.

Following his playing career, Cullen went on to be an assistant coach with the Lightning for the 99-2000 season." 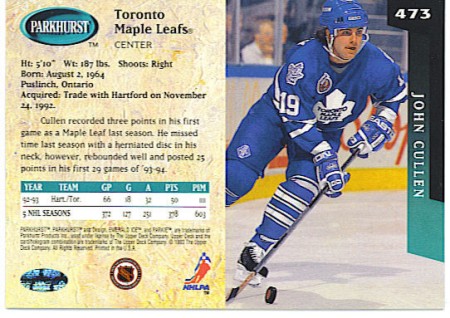