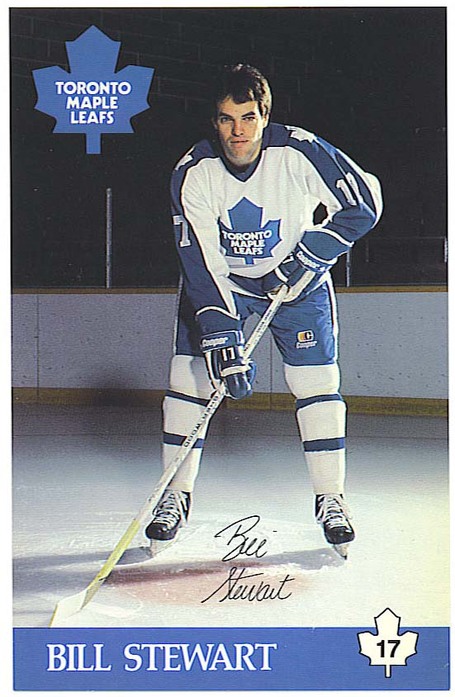 (Normally, when I write these things, I do recognize that there is an actual audience out there.  Today I don't care.  This one is for me....)

Lots of people might not really remember Bill or understand his significance, so I'll tell you.  He's much more than the second-last player in Toronto to wear #17.

Bill Stewart is the greatest table-hockey defenseman in history.

In about 1985-86, a buddy (let's call him Rob) and I rediscovered the joys of table hockey.  I'd played a ton before coming to Ontario but hadn't found a sparring partner out here.  Rob had an old set in the basement and a new hobby was born.

The first order of business was to choose our teams.  Without putting a lot of thought into it, I picked the team I'd always used (a bunch of hall-of-famers plus Lysiak, Secord and McDonald as my top line) and looked on in dismay as I saw that he'd grabbed every Maple Leaf there was to grab - all but one, that is.  He'd overlooked a little-used defenseman from the previous season who was no longer with the club.  I nabbed him.  Bill Stewart was now my lone Leaf connection.

The game he had was one of those 70s Coleco issues with the team logos on the side (Rockies and Barons and Atlanta Flames, oh my!) and the orange scoreboard/puck dropper over centre.  If a puck went in the net a little red plastic light would pop up behind the net.  Bopping this would kick the puck back out. 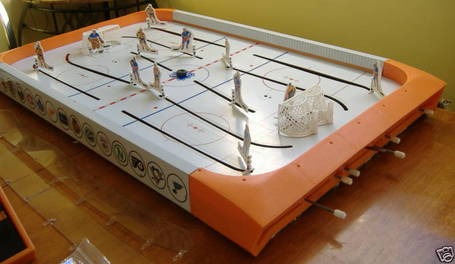 We had a different setup at home with a lot more room between players and a different goaltender.  This was definitely an "away" rink for me.  If I had a .200 winning percentage on that set, I'd be stunned.  The biggest problem I had with it was that for whatever reason, I could never get the pass through from the wings to the centre, which was the prime way of scoring goals.  The only real use I had for my centre was that if you were quick, when the puck dropped you could hit it before it reached the ice.  You'd use the centre's head to drive it right over the goalie's shoulder.  It was a sure goal if you made contact but you'd only get it right maybe one time in 20.

My one hero, my one ace in the hole, was Bill Stewart.  I couldn't get a ton done with the centre, but from right d it was lights out.  Bill, who scored all of two goals in his Leaf career, outpointed even Bobby Orr on my defense.  It wasn't even all my right defensemen who were dynamite - it was just Bill.  We tracked it.  Using an egg timer as a game clock and to track line changes it was obvious - when it was Bill's turn to be on the ice, he was dominant.  You just couldn't touch the guy.  Rob might have had Iafrate, Benning and Salming, but I had Bill Stewart.  If I'd had a team of Bill Stewarts, I'd never have lost.

The ritual went something like this - I'd be down a goal (or perhaps several, if Terrion was lighting me up again) and the puck would be deep in my zone.  Bill would corral it next to his own goaltender and ZAP!  In the net.  We'd check the clock, verify who had scored it ("STEWART!!!!") and Bill would be cursed/lauded, raised joyously to the rafters/mashed flat under an angry fist, rinse and repeat.  Great fun it was.

Years passed, we all pretended to grow up and our crowd scattered to universities around the province.  One year, we gathered a bunch of us together and decided that rather than another Risk/Paranoia marathon, we'd have the table hockey tournament for the ages.  Ground rules were set, rosters fixed and a couple of hours later, the Final was ready.  Me vs. Rob - as it had to be.  A pitched defensive battle made it to sudden-death overtime.  All of a sudden, a loose puck wound up on right defense - shot - SCOOOOOOOOOOOOORES!  High fives all around and talk of what a great tournament it had been.

After a minute or two - the question was asked.  "Wait a minute, who got that goal?"  The official score clock was checked, the line rotation queried.  Rob looks up with a look that told me it could be no other.

It couldn't have ended any other way.

Bill the player?  Couldn't tell you a thing about him.  I remember that as a junior coach, he got in hot water once for trying to smuggle a player across the border in the baggage compartment of the team bus, that's about it.

Bill the rod-hockey defenseman?  The greatest ever. 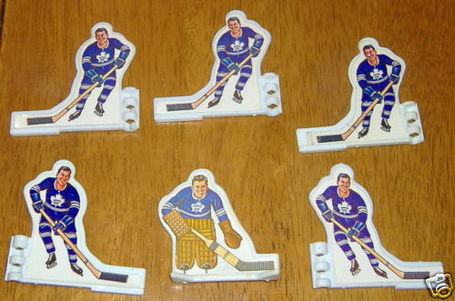 Bill is at the bottom left.  (Actually, I can't remember what teams we had on that game, I think one was Vancouver.) 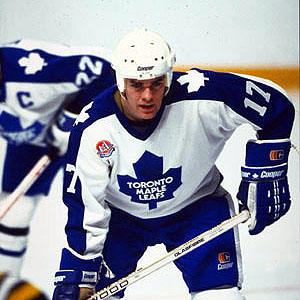 Some other guy also named Bill Stewart - via www.legendsofhockey.net


the HHOF take on Bill:

"After four seasons as a junior player with four different teams, Bill Stewart was selected by the Sabres in the 1977 Amateur Draft and made his NHL debut in the 1977-78 season. He spent the majority of the season with the team's AHL affiliate in Hershey, but saw his first action in the Stanley Cup playoffs.

Stewart played the next season in Buffalo, only to be sent back to the minors for the next season. He started the year after in the minors until he was traded to the Blues, where he played the rest of the year, with the exception of two games with their CHL team in Salt Lake City. After two more seasons with the Blues organization, the majority of it in the minors, Stewart signed with the Leafs as a free agent in 1983.

After only two seasons in Toronto, Stewart was on the move once again, in 1985, when he signed as a free agent with the Minnesota North Stars. His stay in Minnesota lasted only eight games, while spending the majority of the 1985-86 season with the team's AHL affiliate in Springfield. This was Stewart's last NHL season. He went on to play in Italy for nine seasons before retiring from the game in 1995." 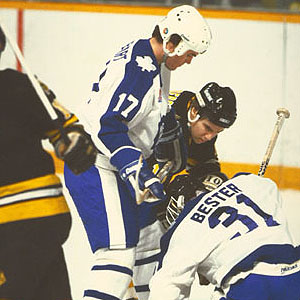