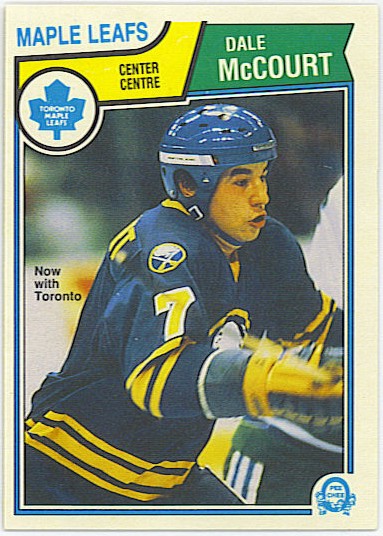 With the emergence of Kopitar and Doughty and their newfound rise to the ranks of the playoff-bound, the LA Kings are quite the happening team these days.  Hard to imagine that there was a time when a player would not want to go there so badly that he would actually sue the NHL and NHLPA to prevent it from happening.

That was Dale McCourt.

Dale was rated the best player available out of the OMJHL (now the OHA) for the 1977 Entry Draft.  He'd been the Memorial Cup MVP for 1976, led the inaugural WJC in scoring in 1977 (18 points in 10 games) was a first team all-star and league MVP in 1977.  He was chosen first overall by the Detroit Red Wings.  Wings GM Ted Lindsay likened him to Stan Mikita.

He had a very solid rookie season and was poised for great things until the NHL arbitration system got in the way.

The Red Wings signed RFA Kings goalie Rogie Vachon to a deal in the summer of 1978.  The way that free agent compensation worked in those days was that both teams would submit a potential compensation package to an arbitrator.  The arbitrator would then choose one of them as the compensation for the signing.

The way that this process evolved over the years (mainly because of cases like this one) was that the onus was on the team that signed the free agent to put a pretty good package together - otherwise the team that had lost a player would get their choice, and they usually shot for the moon.

(Note - it didn't always work that way, particularly for the Leaf cases - think Gary Nylund - Leafs wanted Ed Olczyk, the arbitrator laughed and we got Ken Yaremchuk and Jerome Dupont.  Think also of the loss of Zezel and Marshall for Mike Craig.  For the converse, Scott Stevens went to NJ as compensation for the Shanahan signing.)

In 1978, the Wings offered Bill Lochead and Jim Rutherford - not exactly players of Vachon's calibre.  The Kings demanded McCourt, and were awarded the prized rookie.  This would be the modern equivalent of the Islanders signing someone like Henrik Lundqvist and losing Tavares in the deal.

McCourt wanted no part of this and took the whole thing to court.  Hockeydraftcentral has the rest:

The Dale McCourt Case: A major legal battle erupted after NHL arbitrator Ed Houston ordered that Detroit transfer McCourt's NHL rights to Los Angeles as compensation for the signing of restricted free agent Rogie Vachon on Aug. 8, 1978. The Red Wings had been offering Jim Rutherford and Bill Lochead as compensation, but the Kings demanded McCourt, and the arbitrator sided with Los Angeles, which was offering McCourt a $3 million contract.

Despite the big money, McCourt refused to go to Los Angeles, and sought legal protection. He got a temporary restraining order from U.S. District Court Judge Robert DeMascio on Sept. 18, 1978, overturning the arbitrator's decision and allowing him to remain with the Red Wings. The judge ruled that compensation requirements on NHL free agency were an illegal restraint of trade because they limited competition.

McCourt's lawyer, Brian Smith, then sued the NHL, the NHLPA, the Red Wings and Kings in an effort to prevent McCourt from ever being sent to Los Angeles as part of any compensation package. While the cases were tied up in the courts, McCourt continued to play for Detroit, spending the entire 1978-79 season there along with Vachon.

In the process, McCourt angered many fellow players, who thought his actions were undermining the NHLPA, which had agreed to the compensation requirements in its Collective Bargaining Agreement.

McCourt appeared to have lost his legal battle at the end of the 1978-79 season, when the 6th U.S. Circuit Court of Appeals in Cincinnati upheld the arbitrator's original decision, but McCourt immediately appealed the case to the United States Supreme Court.

The situation was resolved, and the need for a Supreme Court ruling avoided, when Los Angeles traded McCourt's rights back to Detroit for Andre St. Laurent, 1980 first-round pick (Larry Murphy) and the option of having Detroit's 1980 second-round pick or 1981 first-round pick (Los Angeles chose the 1981 first-round pick -- Doug Smith) on Aug. 22, 1979. This was an alternate compensation package that Los Angeles had been willing to accept in 1978, but Detroit had rejected. Los Angeles' original request, before the McCourt request set off a legal battle, had been for Reed Larson, two No. 1 picks and $700,000 in cash.

The McCourt case helped to eventually change the NHL's rules on compensation but the experience took its toll on McCourt. He later said he lost his love for being in the NHL as a result of the legal ordeal.

McCourt never really seemed to progress much as a player after that.  He was good for the most part, but never great.  He normally led the Wings in scoring or was close to it, but it's not like Detroit was particularly good or deep.  He'd be dealt to Buffalo in 1981, where it really didn't work out at all for him, and then released a couple of years later.

In 1983-84 he was a reclamation project for the Toronto Maple Leafs.  Much ado was made of his potential and of his relationship to George Armstrong (Dale was George's nephew) but it never really amounted to much.  At season's end, Dale went off to Europe, never to return (not for hockey purposes, anyway).

For whatever reason, Dale is one of the players I remember from my first NHL game.  He wore #12.

(Note - McCourt put up no fuss with the trade that sent him to Buffalo, saying that trades were part of the game.  Had be been traded in 1978 instead of awarded, he said he'd have gone - see redwings.nhl.com.) 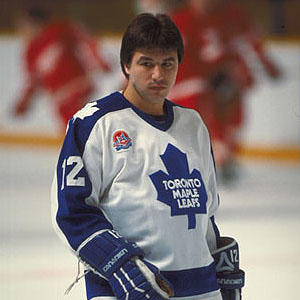 
the HHOF take on Dale:

"Centre Dale McCourt was expected to be an NHL superstar after an outstanding amateur career. He ended up having a reasonably productive seven-year NHL career and also excelled in Europe.

The native of Falconbridge, Ontario was a junior superstar in the OHA with three different clubs. During each of his last three years as an amateur, he scored at least 50 goals. McCourt also represented Canada at the 1977 World Junior Championships where he was tournament all-star and led the Hamilton Fincups to the Memorial Cup in 1976. He also won the Stafford Smythe Memorial trophy as Memorial Cup MVP in 1976, was named the Canadian Major Junior player-of-the-year in 1977, and placed on the OHA first all-star team both years.

After being the first overall pick at the 1977 Amateur Draft by the Detroit Red Wings, McCourt impressed with 33 goals. His creativity on a line with Paul Woods and Bill Lochead as well as the power play helped the club reach the playoffs for the first time since 1970. Following this rosy first season, the young forward's energy was taxed during a nasty court battle when he refused to report to the L.A. Kings after being awarded as compensation for Detroit's signing of goalie Rogie Vachon. The matter was resolved and McCourt remained in Detroit but his play never progressed after his solid rookie year.

McCourt was a solid point producer for Detroit but the team never built on its success in 1977-78. The club's absence in the post-season enabled the clever pivot to represent Canada at the 1979 and 1981 World Championships. After recording a career-high 86 points in 1980-81, McCourt's market value was fairly high on the trade market. Early in the 1981-82 season, he and teammate Mike Foligno were the keys to a multi-player deal with the Buffalo Sabres.

The enigmatic centre was placed on a line with Tony McKegney and Alan Haworth but he struggled to gain the confidence of coach Scotty Bowman. He scored three goals when the Sabres came within a game of reaching the semi-finals in 1983 but was released the following October. McCourt was signed as a free agent with the Toronto Maple Leafs and scored 19 goals during the team's failed bid to make the playoffs. In 1984-85, he played his first of seven years with Ambri Piotta of Switzerland. Along the way, McCourt topped the 40-goal mark twice and helped the team earn promotion to the Elite Division before retiring in 1991." 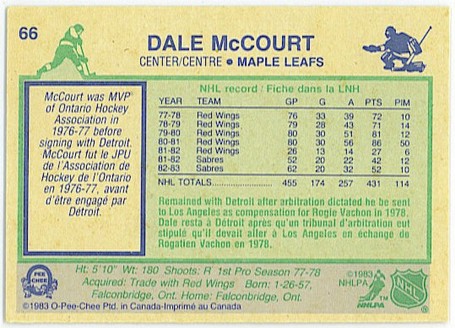