Share All sharing options for: Hang with us; we're experiencing "Technical Difficulties" 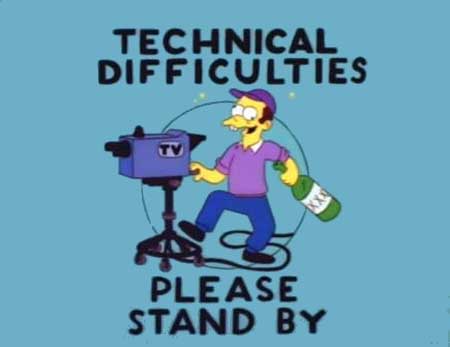 Rebranding the Toronto Maple Leafs. Why not just use facepalm.jpg as a logo? [PuckDrawn]

I'm pretty sure they already are; just have to go through the motions first [Fallen Leafs]

"Leafs plagued by pathetic power play." This obvious alliteration brought to you by the letter P [National Post]

"Leafs open to trade Garnet Exelby." Who gives a shit? [Behind the Net]

Trade deadline predictions for the Leafs; anything that's not nailed down [Hockey Analysis]

Deep Thoughts with eyebleaf [Sports and the City]

Is the currenty crappy play of the Leafs making them lose local appeal? [Frozen Leafs]

"The Passion that Afflicts Us All" [Toronto Mike]

A look back at the teams tonight's opponent, the New Jersey Devils, used to be [Vintage Leaf Memories]