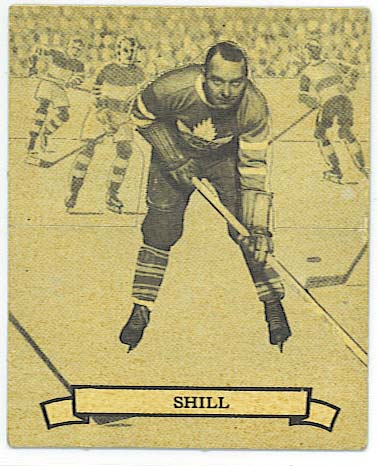 So many times we're told (clearly by fans who have never read anything they've written) that the entire MSM is composed of Leaf shills.  Thought it might serve a purpose to actually see what one looked like.  Ba-dum-pish.

Today has been a funny day.  I saw a bit on Sportsnet this morning about Price and Markov hugging and making up and literally had Kumbaya stuck in my head for the next three hours and that's a fate that nobody deserves.  So I was in a state to make a silly post filled with nothing to do with Jack Shill because, frankly, I really knew nothing about him.

But I decided that that wasn't terribly nice, and I'd do the cursory google search to see whether there was any information to be had.

What do you know - there was.

Jack Shill was a Toronto kid.  He came up through the Marlies and played both junior and senior hockey for them.  He was a full-time NHL player for four seasons and a part-timer for two more.  When traded from the Leafs, he brought future NHL All-Star defender Wally Stanowski in exchange.  Not bad.

Now, judging from his numbers and the fact that he spent most of his career in lesser pro leagues, he was one of those guys who was either a lower-echelon NHLer or a upper-echelon minor leaguer.  He was an all-star in both the IHL and AHL.  He was part of Chicago's second-last Stanley Cup win, which came against the Leafs in 1938 (you think our droughts have been bad?).

What I kind of like about Jack is that he's one of those guys who just played and played (reminds me of a great-uncle of mine - a story for another day).  When his pro days were done, he played in any number of senior leagues and minor pro, including a number of Toronto-area circuits I've never even heard of - like the TIHL (Toronto Independent Hockey League?  Just guessing.) and the TNDHL, with teams like the Toronto Tip Tops, Dehavillands and Toronto Maher Jewels.  A 1948 back injury finally made him stop.  While the team names look almost beer-leagueish, the TIHL has been home to a number of NHL players (either on the way up or the way down, or both), among the more notable that I saw were Hall-of-Fame goalies George Hainsworth and Bill Durnan.  Definitely a league I want to look more into. 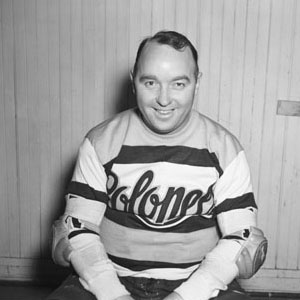 Jack with the Toronto Research Colonels of the TIHL - via www.legendsofhockey.net

Aside from his pro-days, Jack remained a Toronto guy, working for the city for a lot of years.

Jack was in the collectables news lately because his family auctioned off a pair of his old sweaters (given the era, these actually are sweaters) - one from the first-ever AHL all-star game (from Joe Pelletier), the other is this gem: 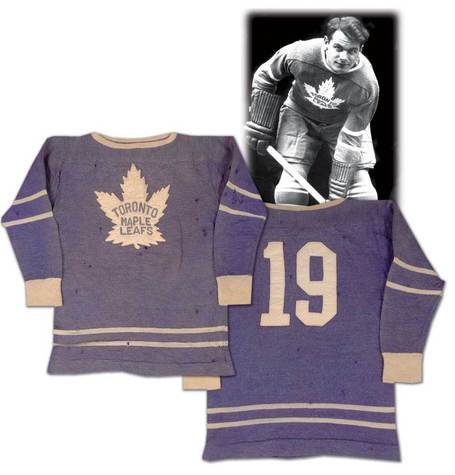 The auction company put the Apps picture on it, I guess, because Syl Apps has more name recognition than Jack Shill, but this is really cool.  This is likely the same sweater he's wearing in the card above.  He shared that number in 1936 with a rookie goalie named Turk Broda (presumably not in the same games....).

Incredible and extremely rare 1930s Toronto Maple Leafs game worn blue wool sweater evokes long ago memories of the Kid Line and trip after trip to the Stanley Cup finals. After their first Stanley Cup win in 1932, the Maple Leafs produced great playoff teams throughout the rest of the decade, yet were unable to reclaim hockey's top prize despite the presence of top line forwards Charlie Conacher, Joe Primeau and Harvey "Busher" Jackson, all Hall-of-Famers. This rare Leafs beauty was obtained from the family of Jack Shill, a left wing who played 42 games with Toronto in the mid-1930s, including the 1936-37 season when he recorded eight points in 32 games. Shill wore a variety of numbers over the course of his stints with the Leafs, including #19, which is sewn onto the back of this vintage sweater in white felt. Turk Broda also wore #19 briefly as a rookie in 1936-37. Broda took over goaltending duties from fellow Hall-of-Famer George Hainsworth, who appeared in three games before he was traded to the Canadiens. The Maple Leafs debuted this particular style of their blue jersey in 1934-35, when Shill was loaned to the Boston Bruins. He returned to the Leafs the following season and appeared in three regular season games before contributing three assists in nine playoff games. "Toronto Maple Leafs" is spelled out in individual blue felt letters sewn with white thread onto the sensational white felt veined maple leaf crest on the front. The #19 in white felt sewn onto the back of the jersey remains remarkably clean. The blue wool on the outside of the sweaters has faded somewhat, not surprising for a jersey that dates back over 70 years. A couple of dozen holes are to note throughout the jersey, none nearly as large as a dime. A "Monarch Knit All Wool" tag is sewn inside the front left hem, and a look at the interior of the sweater gives a sense of the rich royal blue color originally displayed. A truly wonderful opportunity for Maple Leafs/ rare jersey collectors!

So there you have it.  There's always a little more than you think. 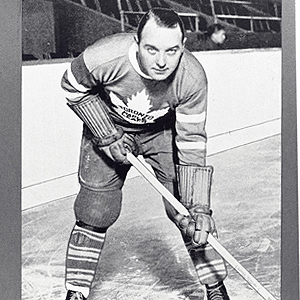 the original of the card shot - via www.legendsofhockey.net

the HHOF take on Jack:

"Born and raised in Toronto, Jack Shill played for the Toronto Marlboros in the OHA from 1929 to 1933. He made the jump to the NHL for the 1933-34 season, with the Maple Leafs, of course.

The 1936-37 season marked Shill's first full year with the Leafs before being traded to the New York Americans prior to the 1937-38 season. After playing 22 games for New York, Shill was traded to the Chicago Blackhawks where he finished the regular season as a Hawk and helped the team in the post season. The Hawks faced Shill's recent team, the Americans, in the semi-finals and sent them home after winning two games to one. In the Stanley Cup finals, the Hawks faced yet another former team of Shill's, the Leafs. Chicago claimed its second championship and Shill's first and only Cup.

Shill played one more season in the NHL before moving on to the AHL and finally hanging up his skates in the 1942-43 season. " 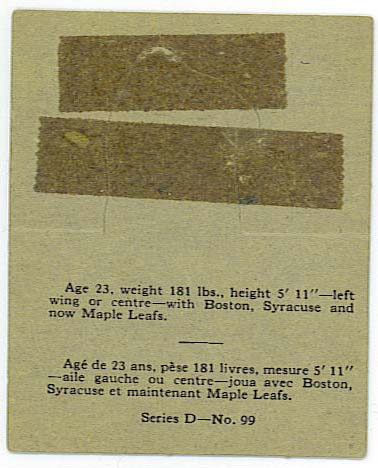