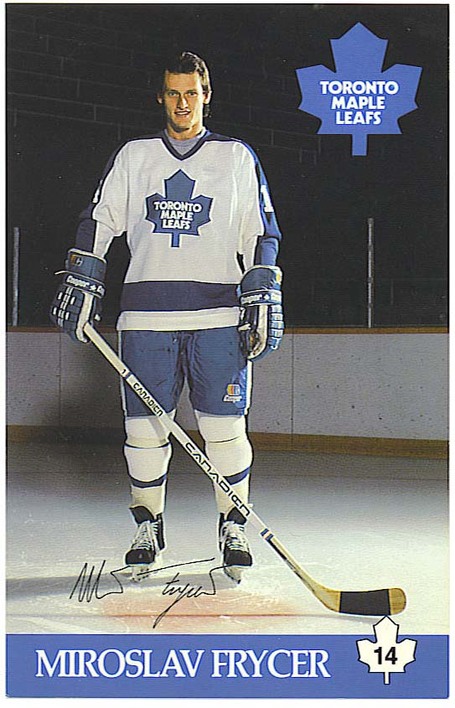 You'd think I'd have learned by now.

Every year, I pick some big name heading into the holidays, hoping his mere presence would inspire the Leafs to some great run of hockey.  Five years running now, they stumble around through the entire break and are middling at best.

Next year, it will be different.

As of this moment, next year's holiday Leaf is slated to be Rich Costello.  And if I can find an image - any image - of Ken "minus-one" Hammond, I'll use it.  This is no idle threat.

Anyhow, it's a new year, a time to look forward, which of course we do here by, erm, looking back 25 years.

Many people (I can't really name any, but I'm going to construct a straw man here so I can knock it down) look back on the 80s teams and assume they stunk because they weren't any good.  Well, those straw people would be partly correct, but as we've seen so far with Gary Nylund, part of the problem wasn't that the players weren't talented, but that their talented players couldn't stay healthy.

We're actually coming up on the anniversary of one of Mirko's big Leaf moments.  On January 8, 1986, he scored four goals as the Leafs shocked the entire hockey-watching planet by scoring 11 goals against the defending Stanley Cup winners from Edmonton.  (They gave up 9 in the process in what I believe - but can't prove - is an NHL record for the most goals given up by a winning team.)  Somewhere on a decaying beta tape in my parents' basement, I have those goals, called by a young, enthusiastic Leaf play-by-play man named Jim Hughson.

Gretzky was pretty impressed with Mirko that night, and really, there was much to be impressed with.  He had great hands, speed, finesse - even reasonable size.  He lacked defensive polish, but that hardly made him unique in 1984.

His real problem was his health.  He just couldn't keep it.

In an eight-season career, he only managed to get into 60 games three times, and peaked at 73.  The one season he did play 73, he led the Leafs in scoring with 75 points, then lost almost the entire season that followed with what I think was a recurring groin/abdominal problem.  He'd only play 68 times over the following two seasons.

The other thing that hurt was his relationship with John Brophy, which was something less than cordial.  John liked bruisers and grinders and speedy skill guys who didn't check all that much (see Courtnall, Russ) didn't fare all that well.

Mirko would be sent to Detroit in 1988 for Darren Veitch, who didn't play all that much.  Then again, neither did Mirko, who would split the portions of that season that he was able to play (just 37 games) between the Wings and Oilers before heading back to Europe to finish his career.

Read the HHOF blurb below.  Mirko was really quite the scorer.  Shame it never worked out fully.  That sort of problem defined the Leafs of that era more than anything. 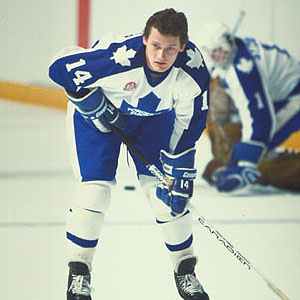 Mirko with Rick St. Croix in the background - 1984 - via www.legendsofhockey.net

the HHOF take on Mirko:

"In October 1981, Miroslav Frycer played his first match on home ice against Toronto. His performance was outstanding, and he even managed to overshadow the Stastny brothers when the Nordiques won by a score of 6-4. Frycer scored three of those goals and was named the game's star. The next day, a Toronto paper proclaimed in a one-inch headline "Four Czechs are too much for Leafs." It was true except for the fact that the Stastny brothers were Slovaks. The only Czech on the team was Miroslav Mirko Frycer, also known later as "Frigo" (the Czech nickname for comic Buster Keaton). His debut on home ice and his second NHL game made such an impression on the Maple Leafs management that next spring he left Quebec for Toronto, where he wore number 14 for the next few seasons.

In a game on March 17, 1981, Frycer faced his old team and this time the results were reversed. The final score was 6-3 for Toronto and the architect of the victory was none other than Miroslav Frycer. Journalists flocked around the Toronto rookie in the dressing room.

One week later, on March 24, 1981, Frycer pulled another rabbit out of the hat. In a game that had them on the verge of being eliminated from Stanley Cup contention, the Leafs had to beat the St. Louis Blues. It was tied 3-3 and the clock was ticking away on the Leafs. Less than a minute remained in regulation play.

Fighting the odds, coach Mike Nykoluk took a gamble and pulled his goaltender, an unusual move in a tied situation. Miroslav Frycer appeared on the ice, and Toronto tensed up for the faceoff in the Blues' zone. Winning control of the puck, Frycer skated with it almost to the far boards. When he got within shooting distance, he let go a shot and scored the winning goal at least in that game. In the series, Toronto held on for a few more days but finally gave in to the stronger team.

In the 1982-83 season, another defenseman, Czech Vitezslav Duris, returned to the team, making a considerable Czech colony playing for Toronto in the 1980s. The oldest of the Stastny brothers, Marian, appeared on the team for one season, as did the Czech-speaking defenseman Rick Lanz, and later even Peter Ihnacak's brother Miroslav. The first Czech to wear a Toronto jersey, however, had been goaltender Jiri Crha, who joined the Maple Leafs in 1979.

Frycer can legitimately take his place as one of Toronto's best players. In 1985 he was the only Toronto player chosen to represent the Campbell Conference in the All-Star Game. In a game against Edmonton on January 8, 1986, that ended with an incredible score of 11-9, four of the Leafs goals were once again scored by Miroslav Frycer. After the game, even Wayne Gretzky referred to Frycer as a great hockey player.

It's no secret that the end of his tenure with the Toronto Maple Leafs came with the arrival of coach John Brophy. What started as a fairly good relationship quickly deteriorated, with his technical play, Frycer couldn't get along with Brophy at all and was even accused of leading a mutiny against him. Shortly after that he was traded to Detroit, where he got along fine with Jacques Demers. During his first great match against Toronto in a Detroit jersey, a big sign appeared on the wall in Maple Leaf Gardens welcoming Frycer back to Toronto and thanking him for all the wonderful moments he had brought his team. All the while a disappointed coach Brophy sat on the bench. After the game, the press conference turned into a sideshow with Frigo as the comedian. He described life with Demers as a day full of sunshine whereas life with Brophy was a dreary, rainy autumn day.

Chronic injuries affected his game in Detroit and his days in the NHL were clearly numbered. But one last trade to Edmonton postponed the inevitable for a while. He retired from the NHL in 1989. " 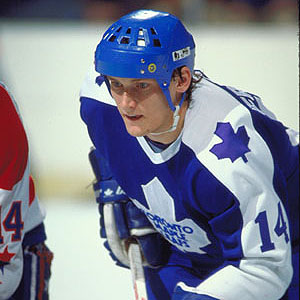