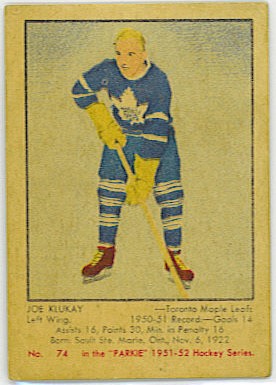 Not really feeling the love for this game tonight.  Justin Pogge might have been an interesting one for the WJC tie-in, but alas, he's not in the scan pile.

When in doubt, go for the nickname - and Joe Klukay had a dandy.  For reasons that have never been particularly clear to me, Joe was known as "the duke of Paducah" - I'm sure it meant something to those who knew him.

It often seems kind of redundant, when talking about older Leafs, to say he was a checker and a penalty-killer.  The Leafs always had a lot of them because the entire team philosophy was built around defensive hockey.  Still, that's what Joe was and he was a dandy.  Joe Pelletier calls him "one of the greatest defensive forwards to ever play the game of hockey."

At six feet and almost 190 pounds, he had good size for the post-war era and he could skate.  This made him very good on the forecheck and allowed him to hem other teams' power plays in their own end.  When not killing penalties, he could score some - a regular 15-goal scorer back when 20 was an accomplishment.  He'd play the left side on Max Bentley's wing - it tells you something about the depth of centres on the Leafs when an Art Ross winner like Bentley drew the penalty killers as linemates. 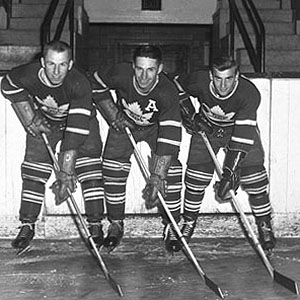 Joe on a line with Max Bentley and Danny Lewicki - I'd guess c.1950 - via www.legendsofhockey.net

After a stint in the Navy during the war, Joe joined the Leafs with a bunch of other rookies in 1946, and played with them through the string of four Cups in five years.  In the changeover that happened after the 1951 Cup, Joe spent a couple seasons in Boston before coming back for another season-plus here with the Leafs.

It was kind of happenstance that I picked Joe today.  Coming in this morning, I really had nothing brewing.  I'm glad that he jumped out at me, though.  The next block of history posts is going to have a lot to do with the Leafs of this era and Joe epitomizes so much of what made those teams great - hard work, attention to detail, dogged determination and defense.  This was a much better Leaf of the Day that I thought when I started. 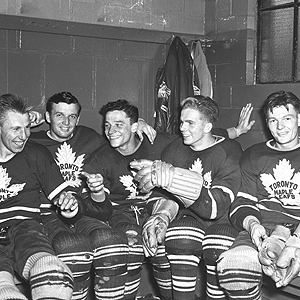 "A strong skater with an above average understanding of the game, Joe learned from the legendary defensive forward Nick Metz when he was a rookie in Toronto in 1946. The two formed a very effective penalty killing unit, often using an uncommon tactic back in those days - heavy forechecking while short handed.

"We just concocted a system for us," explained the man they dubbed the Duke of Paducah. "It had to be the easiest, the most effective way to go about killing a penalty. You had one guy going in and we'd try to contain them in their own end. It worked for ten years so we couldn't knock it."

Metz took Klukay under his wing and taught his eventual replacement everything he knew. Klukay, who was a very effective forechecker, using his speed to jump in on defensemen and his dogged determination and strength to thump the blueliner and create turnovers, was a very important cog of the Leafs Stanley Cup championships of that era, 4 all together." 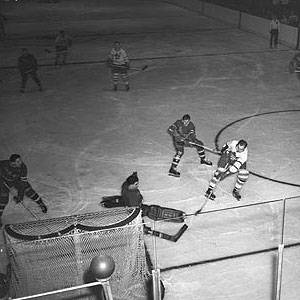 
the HHOF take on Joe:

"Left-winger Joe Klukay played nearly 600 NHL games with the Toronto Maple Leafs and Boston Bruins during the 1940s and '50s. He was a consistent goal scorer and hard worker who contributed to four Stanley Cup wins with the Leafs.

Born in Sault Ste. Marie, Ontario, Klukay dressed for one playoff game with Toronto in 1943 after a strong year with the Stratford Kroehlers of the OHA. During World War II he served in the Canadian Navy where he continued to play hockey with the Toronto and Cornwall detachments. Following a big year with the AHL's Pittsburgh Hornets in 1945-46, Klukay was ready for the NHL.

Klukay joined the powerful Toronto Maple Leafs in 1946 and promptly learned how to win and be a professional. He and linemate Nick Metz became the league's most effective penalty killing tandem on a team that won through discipline and defence. Led first by Syl Apps and then Teeder Kennedy, Toronto won three consecutive Stanley Cups from 1947 to 1949. Klukay also spent some time working alongside talented centre Max Bentley.

"The Duke of Paducah" played on the Maple Leafs when they won the Cup in 1951 on Bill Barilko's overtime goal. He played one more season before being swept out by a youth movement on the team. Klukay was sold to the weaker Boston Bruins but enjoyed being able to rush with the puck in a less restrictive system. In 1953-54 he scored 20 goals for the first time in his career. Early in the 1954-55 season, the Bruins were in dire straits and Conn Smythe agreed to send hard hitting defenceman Leo Boivin to Boston in return for Klukay. During the last part of the season, Klukay worked with Tod Sloan and George Armstrong. He played 18 games the next year before his NHL career concluded.

The AHL's Pittsburgh Hornets were the next stop for Klukay and there were rumours of a coaching opportunity for him there. Unfortunately the team folded after the season but Klukay was soon recruited by George Gee who needed a veteran to play for the senior Windsor Bulldogs. He played several years there and won the Allan Cup under coach Harry Watson before retiring in 1963." 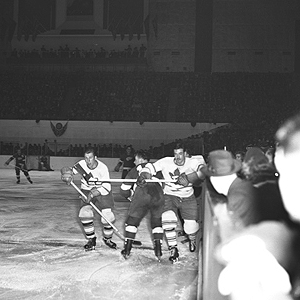 Klukay on the left, Garth Boesch on the right, orchestra (seriously) in the background - via www.legendsofhockey.net 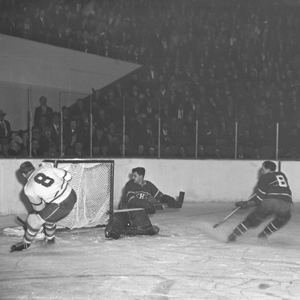