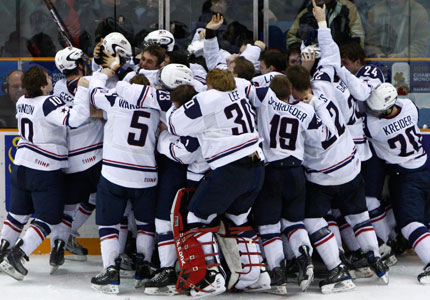 DEAR GOD I HARDLY EVER HAVE TO LEARN THE NAMES OF THE TOMATO CANS THAT CANADA PUMMELS ON THE WAY TO ANOTHER GOLD MEDAL! TWO GOLD MEDALS?!?!? CANADA'S WON FIVE IN A ROW TWICE. GOD WHY NOW? WHY US?

I thought the Airing of Grievances was over but  I got a lot of problems with Team Canada! And now, you're gonna hear about it.

Those young men in that picture are champions. Good for them. They collected their medals because they, aside from that chump that opened the door with a douchey hit on tender Martin Jones, skated harder, smarter, and faster than the Canadians who could have matched the 2002 Olympic Gold Medal team by winning a tournament despite only having two really tough games.

I called Mike Lee's performance almost Toskala-like because down at the other end Jake Allen was giving the veiwing public that also adores the blue maple leaf a brutal acid flashback to almost every game that that fucking Finn has ever started. He will go down in history along with Pascal Leclaire in 2002 and Marc Andre Fleury in 2004. Good thing Willie Desjardins went with the goalie that looked shaky in his one difficult game but managed to pick up two shutouts against such European giants at Latvia and Switzerland.

Wasn't it amazing to watch McMillan play defence after Hamonic was injured. I mean, who knew that giving a charity spot to Jared "I am going to be an 8th overall bust" Cowen was going to blow up in the team's faces?

Or how about benching Taylor Hall in the final? Imagine how great it would have been to have that calibre of player on the ice and playing a team game. Oh, he was on the ice? He just didn't do anything but hog the puck? Yeah, yeah, yeah. He's 17 and he got one hell of a fluky goal. Good for him. Whatever. A franchise player might have done something more is all I am saying.

And Calvin De Haan, how kind of you to look brutal pinching on goals two and four. You're going to do great things on Long Island. Like help them Tank For Whoever.

Nazem Kadri - You get a Maple Leafs pass.

Jordan Eberle - You're so money and you don't even know it! Although I am sure that a certain newscaster in a particular city in which you will be plying your trade in the NHL might give you an idea of how money you are.

Alex Pietrangelo - Nice leadership. You come down from on high to help Canada's team win and you take a 10 minute misconduct and then provide the US with the breakout pass to score thanks to your crappy shooting? Good work spy.

Canadian crowd - You guys made up for being tricked into doing that godawful marketing slogan by this corporate shill piece of shit. Seriously, forget Stephen Harper's attempts to bypass democracy. That fucking cheer is the second most embarrassing thing about being Canadian right now. The first? You got it: Losing one of the few things that Canadians can muster the ability to not only care about but to ruthless pursue perfection in to a country in which most residents would rather watch 300 pound men belly-bump for 12 minutes so that they'll have plenty of opportunity to engorge themselves with High Fructose Corn Syrup. FUUUUUUCK.

Jerry D'Amigo - Don't let this tourney be a tease. Give us Leaf fans a 6th round steal.

Everyone else - You guys better go on and do something in the NHL because unless you were on last year's team no one will ever remember you because you lost. Don't believe me? Ask someone about a player like Marty Murray and if they are obsessive WJHC fans (and old enough) they'll likely remember him. Hell, they might know he was a First Team All-Star. Look at that NHL Career. And he's still a Canadian hero. You guys are nothing.

So read up about the losses. Read about how 6-5 used to be a lucky Canadian score or how John Carlson is apparently Mark Messier's successor as greatest motivator ever or see the # 1 star on Puck Daddy go to a 'Murrcan. DAMMIT! We now have to read posts by clowns like this guy (Editor's Note: Two Line Pass is Chemmy's friend) that thinks that 1812 was a US win.

Canada fancies itself the best hockey country in the world.

Fuuuuuuuuuck. Let's count the gold medals motherfucker. 'Fancies' ourself? It's objective fact. Canada just came close to winning as many golds in a row as your country has ever won in the history of this tournament. Enjoy watching Brian Burke and Ron Wilson coach your team of try-hards past a team without Jake Allen in net or Jared Cowen on defence or sightless referees.

Are these sour grapes? Sure, but Vince Lombardi said it best: Show me a good loser and I'll show you a loser. I hope that every Canadian that returns to this team remembers the shame and embarrassment they feel at being the ones to lose the title to a crumbling empire.

Does this bitterness mean that Chemmy will NNN this because I am making the clear point that the USA won only because Canada couldn't ice it's best team due to having guys like Hodgson injured or Duchene in the NHL or because Canada's goalie is apparently Orthodox Christian and celebrates Christmas in January?

No, because he's drunk in a ditch somewhere.

So congratulations USA. You beat the Canadians despite again blowing a late two goal lead. Enjoy your belated Christmas present from ToskAllen. I'll see you in Buffalo next year to return the favour. I picture it being like the end of the first Godfather when Michael settles up with the degenerates that hurt his family. Until then, I have no idea what game you are talking about. The 2010 World Juniors were cancelled because of the swine flu.