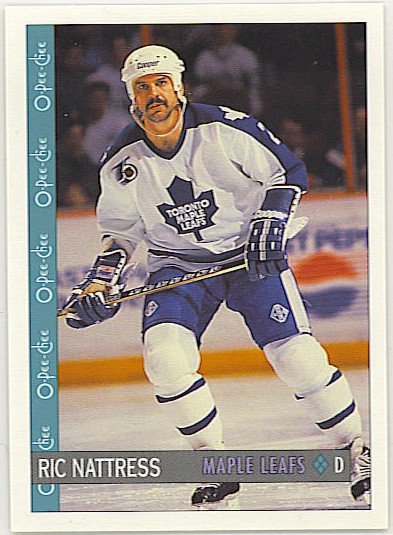 I don't think I've ever seen a team makeover as sudden and dramatic as the one Cliff Fletcher pulled off on Jan. 2, 1992.  I heard the news while driving in the car with a bunch of friends and we all started laughing so hard we nearly had to pull over.

It wasn't just the acquisition of Gilmour that had such an impact, though that certainly helped.  Calgary gave us a complete and viable defensive pairing, and that was just huge.

The pairing, of course, was Macoun and Nattress.  Leaf coach Tom Watt had the sense to leave them together in Toronto, and they were a revelation.  Every time they'd step on the ice, the mayhem that characterized Leaf play in their own zone would suddenly stop, replaced by this odd sense of calm and serenity and the odd spectacle of the puck actually coming out.

It was uncanny, really.

Macoun was great in those first couple of seasons, but Nattress was a surprise as well.  He'd come a long way.

A few years earlier, it had come as a bit of a surprise that he was playing at all.  All I knew of Ric Nattress was that he was a kid who got a huge suspension for a drug bust.  He played a bit for the Habs and then vanished off to the minors.  Eventually he turned up with St. Louis and then Calgary and it turned out that not only was he not causing trouble, he was actually pretty good.

He lost a lot of time to injuries, though.  Sort of the Mirko Frycer of defensemen, he rarely got into 60 games.

He was healthy in Toronto, though, missing only a couple.  The Leafs, 10-25-5 when that trade went down, went 20-18-2 the rest of the way and only missed the playoffs because a one-week strike killed their late-season momentum.  Ric and his play were a big part of that turnaround.

The Flyers signed him to a big four-year deal in the off-season, but he only played half a year there before he was done.

(Note: there is apparently no video or photographic evidence that Ric Nattress ever played in Toronto.  You have to trust me on this one....)

Edit - waaaaaaaaaaiiiiitaminnit.  Get a load of this:


the HHOF take on Ric:

"Ric Nattress was a solid positional defenceman in his own end who could move the puck up ice to his forwards with a minimum of difficulty. He played over 500 regular season games for five different teams and helped the Calgary Flames win the Stanley Cup in 1989.

The native of Hamilton, Ontario was drafted 27th overall by the Montreal Canadiens in the 1980 NHL Entry Draft after a fine rookie season with the Brantford Alexanders of the OHA. He was returned to junior and registered 84 assists in two years while playing a hard-nosed style behind his own blueline.

"Stash" made his pro debut by playing five Calder Cup playoff games for the Nova Scotia Voyageurs in 1982. He played 40 games for the rebuilding Habs in 1982-83 but his role was reduced over the next two seasons. In addition, he served a 30-game suspension after being charged with possession of marijuana and hashish.

Nattress' career was given a boost just prior to the 1985-86 season when he was traded to the St. Louis Blues for cash. His defensive savvy clicked with the style of play favoured by coach Jacques Demers and the Blues reached the semi-finals for the first time in 14 years. The next year he teamed with Jim Pavese and was a top penalty killer as St. Louis finished first in the Norris Division before being upset in the first round by the Toronto Maple Leafs.

In June 1987, the veteran rearguard was traded to the Calgary Flames where played a steady defensive role on one of the league's top teams. The Flames topped the NHL in points during the 1987-88 season then won it all the next year in a six-game final versus Montreal. Nattress continued to be a stalwart on the club's blueline and represented Canada at the 1991 World Championships.

Part way through the 1991-92 season, he was traded to the Maple Leafs in the deal that saw centre Doug Gilmour and veteran Jamie Macoun head east and Gary Leeman as the key figure heading to the Flames. Nattress provided stability to the previously weak Toronto defence and helped the team come close to making the post-season. In the off-season he decided to explore his options and signed as a free agent with the Philadelphia Flyers. He played 44 games in Philly before calling it quits after the 1992-93 season."

(Let me get this straight - the nickname of a guy with a drug bust on his record was Stash???) 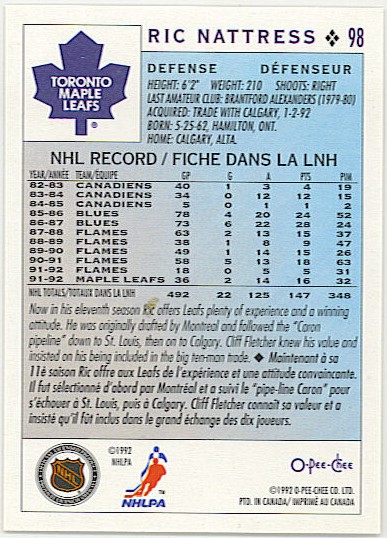