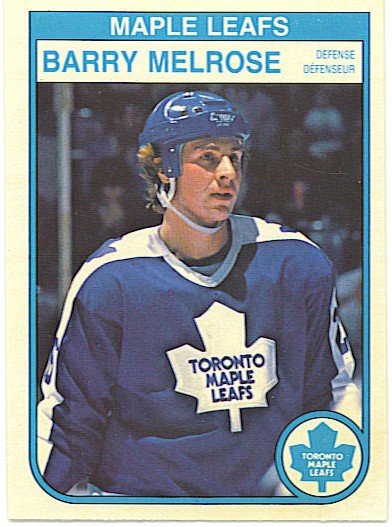 I had a feeling that yesterday's game was not going to go well and that I'd probably be pretty ticked about it, so I let my mind wander towards who I'd choose for the LotD if I were in a bad mood.  I hit on Barry Melrose and it seemed appropriate.

Well, the game didn't go particularly well, so I was right about that.  I'm not particularly ticked, though.  If I stayed mad about every Leaf loss I'd be well into my third or fourth ulcer by now.  So why Barry Melrose?

Well, why not Barry Melrose?

I have no recollection of Barry Melrose the player.  In '82-83 my family was still out west, so I didn't see him, and even after he went to Detroit (as all Leaf defensemen must), I can't say I recall him at all.

I know him for two things, really - for being Wendel Clark's cousin and for annoying us to no end in 1993.  Well, also for being called "Billy Ray Cyprus" (sic) by Don Cherry.  That was pretty good.  I don't think Barry particularly cared that we all hated him.  He probably revelled in it.  It's sort of reminiscent of how he played.

Coming out of junior, Barry was picked 36th overall by the Habs and 37th overall by the Cincinnati Stingers of the WHA.  Given the difference in the sizes of the leagues, this made him a second-rounder in the NHL but only a fourth in the WHA.  In a move that should have endeared him to Leafs fans, he spurned the chance to play for Montreal (or most likely, their AHL affiliate) to head out to Ohio.

By 1979, the WHA was done, and after enduring a season and a quarter with the horrific Winnipeg Jets he came to Toronto (which, truthfully, wasn't a whole lot better, at least defensively).  He brought a willingness to mix it up to the Toronto blue line and this kept him in the lineup for the next three seasons.

Between the two pro leagues, he put together a career that spanned the better part of 500 games, which isn't too shabby.  His real fame, though, came from his coaching (snark removed - ain't worth it) and the subsequent ESPN work. 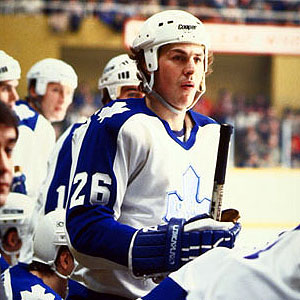 via www.legendsofhockey.net
Barry fights Garry Howatt.  Note the appearance of Dave Shand (#3), acquired by the Leafs and then stuck in the minors, only to be rescued by Washington, who was much better defensively than Toronto.  This was not atypical.


the HHOF take on Barry:

"At the age of 16, Barry Melrose joined the Weyburn Red Wings of the Saskatchewan Junior Hockey League in 1972-73. He quickly established himself as a rugged defensive defenseman. The following year he played 50 games with the team, scoring two goals and 21 points while racking up 162 minutes in penalties.

Melrose joined the Kamloops Chiefs of the Western Central Junior Hockey League in 1974-75 and had 24 points in 70 games. The next year he contributed 12 goals and 61 points in 72 games. He was selected in the second round of the 1976 NHL Amateur Draft, 36th overall by the Montreal Canadiens. However, Melrose was also chosen 37th overall in the fourth round of the WHA Amateur Draft by the Cincinnati Stingers and realizing he had little chance of cracking the powerful Canadiens lineup, which had the likes of Serge Savard, Guy Lapointe and Larry Robinson patrolling the defense, opted to sign with the Stingers. During his first season in Cincinnati, Melrose played in 29 games where he had a goal and five points. He played two more seasons in Cincinnati until the collapse of the WHA following the 1978-79 season. He was then claimed by the Quebec Nordiques in the WHA Dispersal Draft on June 8, 1979 but just 20 days later was traded to the Winnipeg Jets for Jamie Hislop and Barry Legge. He played an entire season with the Jets, scoring four goals and ten points in 74 games.

Melrose began the 1980-81 campaign in Winnipeg before being claimed by the Toronto Maple Leafs on the waiver wire from Winnipeg on November 30, 1980. He spent three years in Toronto before signing a free-agent contract with the Detroit Red Wings on July 5, 1983. However, he played just 14 games in the Motor City before being demoted to the Adirondack Red Wings of the AHL. He played for another year in the minors before retiring after the 1986-87 season. Melrose played in 178 NHL games, scoring ten goals and 33 points with 728 minutes in penalties.

Melrose soon got into coaching and in 1992-93 led the Los Angeles Kings to an improbable berth in the Stanley Cup finals where they went down to the Montreal Canadiens in five games." 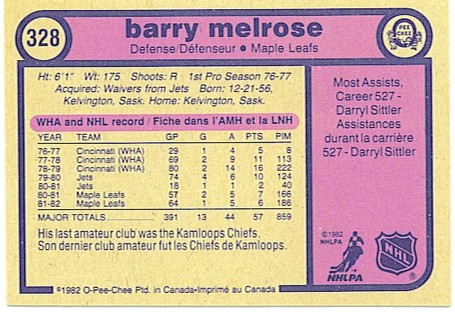