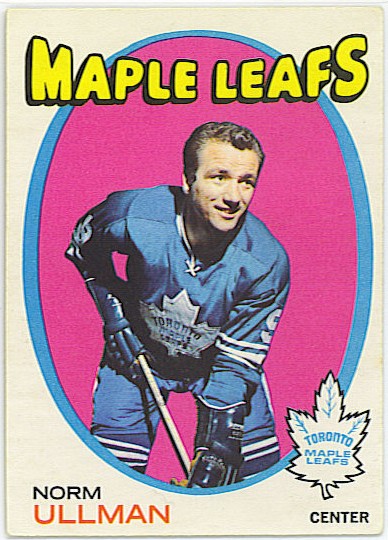 Somewhat lost in the joy and exuberance surrounding the 6-2 loss to Philly was that Tomas Kaberle's point moved him into a tie with Norm Ullman for 11th in Leaf scoring.

Norm Ullman is a guy who I've always thought deserved more credit than he got.  It probably didn't help that his time in a Leaf uniform coincided with the start of the drought and all the confusion of the late 60s and early 70s.  His Leafs were the ones that occupied the space between the Cup winners and the Roger Neilson teams.  Through it all, he played the same classy, effective game he always had.

I've long thought of Norm Ullman as basically a 1960s Mats Sundin.  He wasn't a flashy player, but extremely durable, dependable and consistent.  He never led the league in scoring, but had eight top-ten finishes and reached as high as second overall in 1964-65.  He played a sound two-way game which fit in beautifully on the Leafs.

The deal that brought Ullman to Toronto has often been criticized (though honestly, the only really bad part of it was the Garry Unger/Doug Barrie component), mainly because Frank Mahovlich was so reinvigorated by it.  For the Leafs of 1967-68, though, it really can't be argued.  The Leafs went 8-4-1 after that, largely due to Norm's 17 points in 13 games.  They still wound up missing the playoffs by four points, so if there's a criticism to be made, it's that the trade didn't happen sooner.

It was a good deal for Ullman, too:

"The way it worked out, it was great," continues Ullman. "It was a real strange feeling after playing for one team for so long and then all of a sudden, you're wearing a different uniform. Punch Imlach thought a lot of me and insisted that I be in on the trade with Mahovlich and said he wouldn't make the deal without me. About a year later, he announced that I was the best centre he ever coached so that was quite a feather in my cap."

For the next four seasons, Norm and Dave Keon gave the Leafs a fantastic 1-2 punch at centre.  Norm settled into a line with Henderson and Ellis and they were all consistently among the Leafs' best scorers.  In 1970-71, Norm hit for a career high of 85 points and his last top-ten scoring finish.

By 1972, Darryl Sittler was beginning to assert himself and ice time became a little tighter for everyone.  Though he was still playing well at age 38 in 1973-74, Norm's ice time began to fall off the most, and after 1974-75, he was released by the Leafs.  It was a little tough to accept for him:

"The second last year I played in Toronto (1973-74), I was fifth in the NHL in scoring at the All-Star break and had the second most votes to (Phil) Esposito for centremen for the All-Star Game. I played in the game in Chicago that year. Then the rest of the year, I hardly got on the ice. And it was the same the whole following year."

To me, what happened to Ullman can only be associated with the arrival of the new crop of kids and the desire to make them the future.  This was the same thing that would claim Keon after '74-75.

Norm would play a couple of WHA seasons with Edmonton before calling it quits. 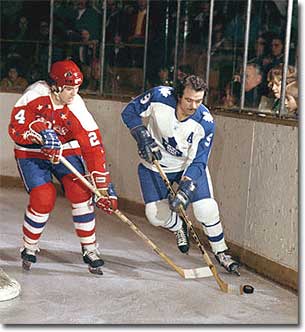 Norm versus the Caps in '74-75 - via www.legendsofhockey.net


the HHOF take on Norm:

"While a junior star with the Maple Leaf Athletic Club and later the Edmonton Oil Kings of the WCJHL, Norm Ullman caught the eye of Detroit scout Clarence Mohr. There followed an impressive developmental year with the Edmonton Flyers of the WHL, where he received valuable tutoring from coach Norman "Bud" Poile. In 1955-56, he played his first of 13 seasons for the Detroit Red Wings.

Ullman went on to record 16 20-goal seasons, including 12 in a row from 1957 to 1969. His consistent production was matched by his durability, as he missed only 21 games in a ten-year span. One of his patented moves was to skate across the other team's blue line, delay, pass the puck to his wings and move down the slot for a return pass or rebound. His powerful arm strength and quick anticipation made him one of the game's toughest forecheckers and faceoff men. More often than not, Ullman would go into the corners or along the boards and emerge with the puck.

Ullman led all playoff scorers with 16 points in 1962-63 even though the Red Wings lost out to Toronto. In 1964-65, he led the league with 42 goals and was selected to the NHL First All-Star Team. For a time, he enjoyed playing on a potent line with Gordie Howe and Alex Delvecchio. He also played with Bruce MacGregor and Paul Henderson on the energetic Hummer Line. On April 11, 1965, during the semifinals, Ullman beat Chicago's Glenn Hall twice in five seconds to establish a new NHL record for the fastest two playoff goals. The following season, he helped the Wings reach the finals, where they lost to Montreal. For the second time in his career, Ullman finished at the head of the post-season scoring list. At one point, coach Sid Abel claimed that Ullman was his most valuable performer.

The team needed a shakeup by the late 1960s. Trading Gordie Howe would have started a riot, but management wasn't thrilled when Ullman was elected president of the NHL Players' Association in January 1968. When Frank Mahovlich became available in March, Ullman was the centerpiece of the package sent to the Maple Leafs. The next year, he played chiefly with Paul Henderson and Floyd Smith. He eventually formed a solid forward line with Henderson and Ron Ellis, which became the team's most consistent unit for a number of years. The self-effacing Ullman once scored a hat trick to reach the 350-goal mark for his career, but he had to be reminded of the feat by linemate Henderson, who made him retrieve the puck. Ullman was also largely responsible for making the players' association acceptable in the Toronto dressing room.

The 1969-70 season proved to be very trying as Ullman experienced the worst slump of his career. His linemates also struggled and the Maple Leafs fared poorly in the standings. He regained his form in the early 1970s, but the Ballard era was difficult for the Maple Leafs players. In 1970-71, Ullman did register a personal-best 85 points, but this still placed him 67 points behind scoring champion Phil Esposito. As the decade wore on, the average age of a player decreased, making it difficult for someone like Ullman, in his late 30s, to make an impact. In June 1975, Ullman cleared waivers.

The Edmonton Oilers of the WHA refused to believe that Ullman was washed up and offered him a chance to finish his playing career back home. They had originally selected him in the 1972 General Player Draft and waited patiently for his services. He rewarded their faith with 130 points over two seasons, along with the classy leadership people came to expect. He retired in 1977 after being arguably the most anonymous 490-goal scorer in NHL history. Ullman gained a place in the Hockey Hall of Fame in 1982 and stayed in touch with the game by playing on the Labatt's Original Six Hockey Heroes tour." 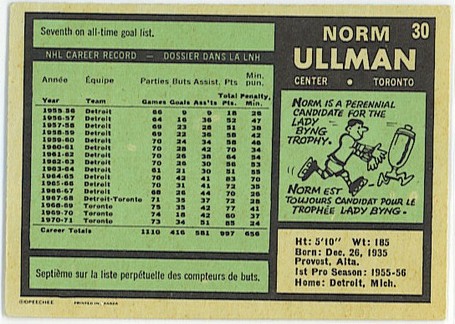