I was listening to Jeff Blair this morning talking about rivalries (and really the lack thereof) in hockey. I didn't catch the beginning of it, so I don't know if he just wasn't feeling the love for Leafs-Rangers hockey or whether there was something else in play. He talked a lot, though, about the perceived decline in Leafs/Habs and Leafs/Sens as well as the old Battle of Alberta, etc.

A couple of interesting points came out of it, though nothing that hasn't been discussed here any number of times. Rivalries are really born in the playoffs and the two teams need to be at least reasonably evenly-matched. Boston and Montreal have a lot going because they seem to meet in the playoffs every other year. The Battle of Ontario came out of four playoff matchups. The Leafs most heated battles over the past decade or so have come against New Jersey and Philadelphia.

I think that it was a mistake to give up the old divisional playoff format, though admittedly it would need some tweaking with six divisions. (How about making four big ones?) When the Leafs were in the old Norris, you knew that if they made the playoffs, they'd be fighting their way through the Blues, Hawks or Wings (never seemed to be the North Stars, luck of the draw). Same with the Habs and Bruins in the Adams. The Leafs came over to the East for 1998-99 and people drooled over the prospect of a division with Boston, Montreal and Buffalo in it, yet in all that time, the only one of those teams the Leafs faced was Buffalo, and that was 11 years ago. It doesn't even really feel like a division, in that sense.

The other thing that came up was that as a fan, the perception of rivalry is really an age-based thing. A hab fan growing up in the 70s and 80s would really look to Boston and Quebec. For me, as a Leaf fan from the Norris era, the key rival is Detroit. The Leafs and Wings were bad at the same time, they came out of it at pretty much the same time and they fought like wildcats every time they played. I've never enjoyed the Leafs being in the east as much as in the west, and the loss of teams like Detroit is a big part of it. Beating Ottawa four times out of four was a lot of fun, let's not kid ourselves, but beating Detroit was simply awesome.

Part of the reason 1993 was so sweet was that it started out with that series against Detroit. The two teams were only four points apart, but the Leafs weren't given much of a chance. When they got smeared 6-3 and 6-2 in the first two games, it was looking pretty grim. We all know how that one ended up, though:

Nikolai Borschevsky was a 28-year-old non-rookie (you couldn't win the Calder anymore if you were over 25, thanks to Sergei Makarov) who the Leafs had drafted in the fourth round the previous summer. It wasn't really a notable pick - the Leafs' limited experience with Soviet players had produced Godynyuk and Mironov, neither of whom had set the world on fire, and while there were suggestions that this could be a guy who might step in and play, it wasn't really a big news event.

It should have been. Borschevsky did step in and was awesome. He scored 34 times as a fake rookie and set what should have been a rookie record of 74 points (Peter Ihnacak's 66 stands even though at 25, he was an old rookie himself). He finished 10th overall at +33 (remember Dave Reid shocking the world by being +10 as a Leaf?).

He was a little guy, but fearless. He'd go into all the danger areas, get the puck first and either bury it himself or find someone else who would. Vladislav Tretiak, now in North America as a goalie coach, called him the bravest player in the NHL.

Borschevsky was just back into the lineup in that Game 7 because he'd cracked an orbital bone in Game 1. He wasn't expected back, but put on a visor and played. The OT winner against Detroit was just one of two he got that spring, but it was as big a goal as anyone got. Only Clark's Game 6 against LA and Gilmour's against St. Louis rank.

Returning from a nasty injury became something of a trend for Borschevsky, though. In the span of one calendar year, he had that orbital bone, a severely separated shoulder and a ruptured spleen that could have killed him had he joined the team on their flight out of town. The effect on him was that he became more of a perimeter player. It was what any rational human being would do, but it cost him his effectiveness and about half-way through 1994-95, he was shipped to Calgary, bringing only a sixth-round pick in return. He'd only play another 20 NHL games and score just one more goal.

He was the heroic little giant-killer, though, and for that he'll always be remembered fondly around these parts.

And just because this is awesome:

That's the stuff rivalries are made of. Listen to that building. :)

(Note - I have to wander off for a week, so Nik has to hold the fort.)

Visit the Nikolai Borschevsky Gallery at the HHOF.

What the HHOF has to say about Nik:

Diminutive Nikolai Borschevsky, who was given the nickname "Stick" due to his skinny frame, was a mainstay with Moscow Dynamo for over six years after having come up through the junior ranks of the organization. He then played several years with Moscow Krylja Sovetov and was a member of the 1992 Team United club that won gold at the 1992 Winter Olympics where he netted seven goals in eight games.

NHL scouts took notice of Borschevsky, and realized he had the talent to play in the NHL. The only question was whether or not he could withstand the rigors of a long NHL season. The Toronto Maple Leafs selected him in the fourth round, 77th overall in the 1992 NHL Entry Draft. He joined the Leafs that fall and in 78 games responded with 34 goals and 74 points. He was with the Leafs for 45 games the following year, missing much of the season due to injuries. It seemed the banging and crashing style of the NHL was not particularly to Borschevsky's liking, being a small player of no more than 175 pounds, and even most doubted he was that big.

In April, 1995 he was traded to the Calgary Flames but lasted just eight games. In September of that year he signed a free-agent contract with the Dallas Stars where he dressed for 12 games before ending his NHL career. From there he moved to Germany and played out the year in Kolner before returning to Russia where he played the final two years of his career with Moscow Spartak.

The highlight of Borschevsky's NHL career came during the 1993 playoffs when he scored the overtime winning goal for the Maple Leafs that ousted the heavily-favoured Detroit Red Wings from the playoffs. 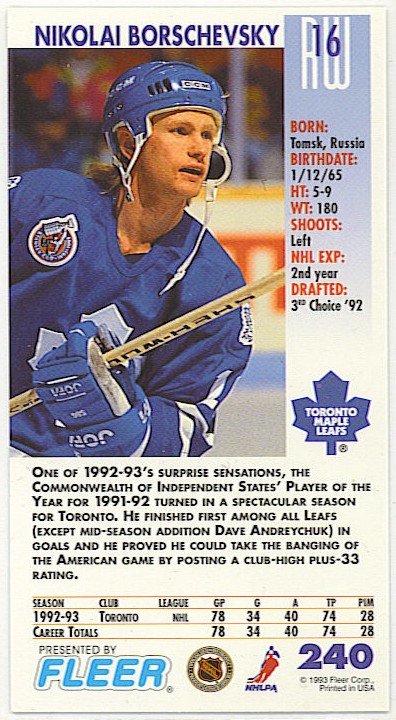