The Toronto Maple Leafs have been slayed. All it took was a spectacular game by 41 year old Dwayne Roloson, a borderline call going against the team, and a John Tavares laser to stop the Leafs' march towards an undefeated season. The bright side is that not every team has a 41 year old goalie enjoying an amazing twilight to their career. The truth is that the bright side to this game is pretty luminous.

The New York Islanders, off to their own expectations-defying start, are a joke no more it seems especially as long as they continue to receive incredible goaltending. Their powerplay, which came into the game humming along at over 24%, was the difference as John Tavares capitalised on the opportunity provided by Brett 'The Curse' Lebda's ridiculous goaltender interference penalty. Ridiculous in the timing of the call and because there was no reason for him to be near the goaltender but not so in that it was an infraction. From the ref's point of view it was a clear penalty. A different point of view was also the cause of the second controversial call.

A special picture and more after the jump. 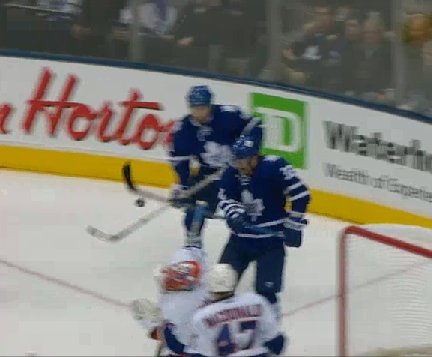 We've seen the replay and you can read Ron Wilson's outrage over it here and what's clear is that there is nothing clear about the play at all. Jean-Sebastien Giguere has the best response:

"The referees are there to make the calls and I wouldn't want to be in their skates," he said. "It's a tough game, it's a fast game. When they go up in the video, there's nothing you can do – they're not idiots, they know what they're doing. If the puck doesn't go in, it doesn't go in."

I actually think that Wilson and Giguere reponded to the decisions perfectly. Wilson got steamed, defended his team, and nurtured a bit of that "Us vs. The World" rhetoric that coaches find so useful. Giguere on the other hand summed up just what the players' reaction needs to be: keep your head down, work hard, and breaks will go our way.

The final controversy - the Armstrong no-goal and the Tavares 'penalty shot' - are really non-issues. The puck never went in so obivously that call was correct but how does Terry Gregson call it a goal to begin with? He was guessing and should have immediately indicated that he had to go upstairs to confirm that it was a goal. As for Tavares, the rule is that the player has to close his hand on the puck and on the replay it looks like he never even touches the puck with his glove. He tries to but misses completely.

Moral victories don't count in the standings but it's hard to paint this in the same light as last season when we were doing nothing more than grasping at straws in order to find a glimmer of hope in the stygian darkness that was the 2009-2010 season. The Leafs completely outplayed the Islanders for about 90% of the game. If not for some timely saves by Roloson, especially on Kris Versteeg, Mikhail Grabovski, and Fredrik Sjostrom then the Islanders would have been run out of the building.

Here's a quick look at some stats from the links above:

So after what seems like a lifetime's worth of "THIS CANNOT LAST!!!1" articles we will now see how this team responds to a setback. Nine points out of ten to start the year is still enough to keep the Leafs at the top of the NHL standings and, as article1 pointed out, it puts the team about 10% of the way to the total needed for the playoffs. It may be a Sisyphean task to remain at the summit but for now it's funny to watch people celebrate the Leafs' loss:

Awful lot of tweets about the Leafs not being undefeated anymore. Rival fans puckering so hard right now they think OTL is the Cup Finals. - Chemmy