Sometimes a defenceman is better served making the safe and easy pass instead of looking to hit a Hollywood pass.

Share All sharing options for: The Sixteen Million Dollar Failure

This is a pretty routine play. Dion Phaneuf has passed to his defense partner Francois Beauchemin who has three options: 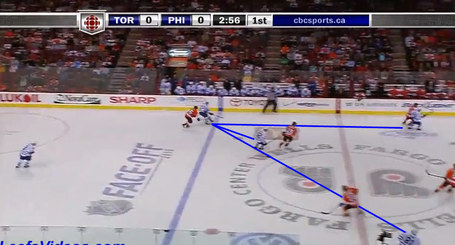 Which of these three outlined passes is the wrong one and why? If you picked the bottom pass to Kessel because it will spring Mike Richards in past Dion Phaneuf you're right. Beauchemin goes for the home run pass to Phil Kessel but doesn't notice Richards. Instead of working it up the boards to Kris Versteeg (upper right) he passes right through the heart of the neutral zone. To be honest though: with how few shots Versteeg has been taking maybe ignoring him wasn't the worst plan.

Richards intercepts the pass and gains speed crossing the blue line in the huge empty space between Beauchemin, Phaneuf and Kessel. 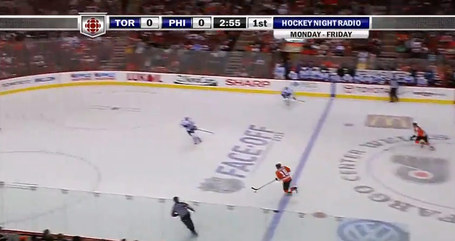 You can see that Phaneuf is caught by surprise. He's twisting around to do the right thing here: keep Mike Richards to the outside of the zone. That will give Jean-Sebastien Giguere the best chance to make an easy save. 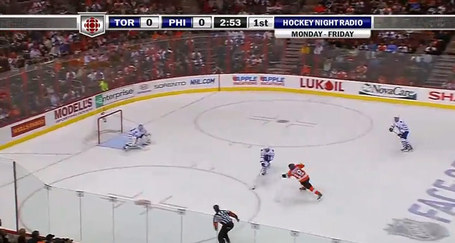 At first I didn't like what Phaneuf did here. He waves at the puck but he stays out of Giguere's way for the most part to let him see the shot. He doesn't overcommit to throw a hit, he makes a decent defensive play. The best outcome for him is to swat the puck off Richards' stick.

Unfortunately for all of us Giguere makes a really bizarre move. He jumps to his left opening the net for Mike Richards to score a weak goal from the top of the slot short side, or as PPP always calls it "the minor league side". 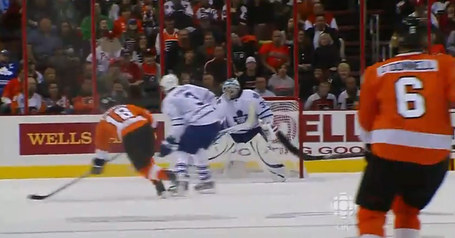 It's the culmination of a bad pass and a lackluster save; 1-0 Flyers. Giguere didn't look sharp all night. His fifth goal against from Daniel Briere saw him get scored on from outside on a routine shot. He'll need to calm down and get back to playing his game: positioning himself well.

With a veteran like Giguere it's likely that he takes longer than he used to at the start of the season to get into the swing of things. I'm not worried about one bad night in the Cup Finalists' barn, but let's hope we don't see this again.