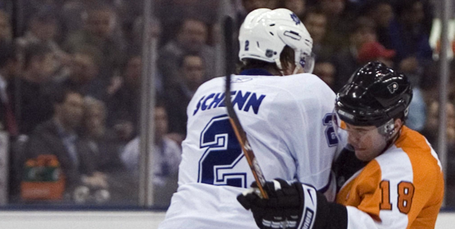 There has been a lot of debate recently about the difficulties of measuring defensive capabilities using statistics, as many statistics rely on goal scoring as a unit of measurement. Although some stats, such as Corsi or Fenwick numbers use shot attempts to measure the flow of the game, rather than a team's ability to score, they still are essentially offence-driven numbers created for the purposes of measuring a goalie's workload.

Zone Hit Ratio (ZHR) is my own attempt to focus entirely on the defensive side of a team's game in the hopes of isolating some of the fine checking work done by many low-scoring defensemen such as Mike Komisarek or Luke Schenn.

If a team has a high ZHR, that means that their defensemen are probably under a lot more pressure than a team that has a lower ZHR. A lower ZHR suggests that more challenges for the puck take place in the offensive zone than in the defensive zone. Note that I have entirely excluded neutral zone hits in this equation.

This means that if a team has a ZHR of less than 1, they hit more often in the offensive zone than in the defensive zone. If the number is greater than 1, the team delivers more of its hits in its own end than in their opponents'.

At this point, I need to stress that ZHR is, at best, a complimentary statistic to evaluating defensive workload. Complimentary, that is, not just to actually watching a team, but also to other stats that exist already. Furthermore, ZHR does not in any way measure defensive capabilities, and assumes that all hits are made with equal effectiveness, which of course is not the case. It is merely a game-flow indicator that uses hitting as a way of tracking puck contestations. That is, since only the puck carrier (or a very recent puck carrier) can be hit, ZHR is a useful way of keeping track of how often a team has to challenge for the puck in its own zone or in its opponents' respective zones.

Another aspect of this statistic to consider is that different strategic systems commonly used by teams to score, such as dump-and-chase, puck-cycling, or scoring off the rush, may affect ZHR numbers more than the players within the systems. For example, a team that scores more goals off the rush might rely more heavily on its defensemen to maintain or recover puck possession than a team that often employs the dump-and-chase system.

Coupling the ZHR number with the team's goals-against average gives us an interesting perspective. If a team with a high goals-against average has a low ZHR number, this suggests that the team's defense is relatively porous, compared to a team with the same goals against average, but a higher ZHR. Of course, maybe the team plays in front of Vesa Toskala, in which case, your boat is sunk anyway, but that's a whole post unto itself. The point is, by combining ZHR with other goal-scoring/prevention based numbers, it's possible to begin assessing defensive capabilities, but I'm not going to do that here.

It is important to note that some of these teams' ZHR numbers will change relatively drastically as the season advances, since we are dealing with a small sample size. I have studied every game played up to and including the games on the night of October 26th. The average ZHR number will likely stay roughly the same, since it is the result of studying 239 team games. Individual team numbers, however, may very well fluctuate, since most teams have only played eight games at this point in the season. In short, the sample size is too small to draw too many conclusions.

A few observations on the data:

Nashville has a very high ZHR, while Pittsburgh's is quite low. That said, both teams are still not much more than two standard deviations from the mean. Also, since we're dealing with small sample sizes at the team level, these numbers could still regress towards the mean.

As you can see, the Leafs actually hit slightly more often in the offensive zone, which suggests that the Leafs' defense may not be under as much pressure as the average team's on a night-to-night basis. It also means that despite having a very small forward corps, the forwards are carrying their weight with regards to hitting.

Montréal's defense, on the other hand, does a LOT of hitting for their team. In terms of hitting, having runty forwards does affect the workload of their defensemen. Interesting to note that so far, they've had the same amount of success as the Leafs in terms of W's and L's.

Note that all information on hits is from www.nhl.com. Also, many thanks and stick taps to my girlfriend and fellow PPPer Miss Fox, who helped me sort out standard deviation.