Share All sharing options for: Tom Kurvers - let's never speak of this again

The signs are everywhere: hockey is coming back.  The Blue Jays are done, having completed about the most enjoyable fourth-place season I can remember.  The weather is crisp and October-like.  At the school bus this morning, there were winter coats everywhere along with a smattering of gloves and scarves.

Talk around the office is of hockey parents comparing notes on their kids' first handful of games.  My kids don't play, but they do skate, so I'm back in the arena on Saturday mornings.  Sitting in the gallery with the other parents, coffee in hand, I watch 60+ kids learn to glide.  There's nothing like the local arena this time of year.  It feels great.

My eldest son found an old McDonald's card of "future star" Marty Brodeur in a box somewhere and asked if he could have it.  He was so pleased with it that he carried it for the rest of the night and even took it to bed.  The girls promptly asked why they didn't get hockey cards.  (Note to the kids - the house is full of them.  Help yourselves.)  They know hockey is coming.

So why am I not pumped?

I am a little, I guess.  I get impatient with the highlight shows when they're showing baseball or football.  I want to know if the hockey highlights are coming or whether I've already missed them.  If I'm up late at night, I'm looking for hockey news rather than an old episode of Mythbusters.  This is a start.

The biggest thing, I guess, is that having just gone through a season where a large percentage of the commentary focused on who Boston would draft with our pick, I'm really not in the mood for another one.  As such, I was really hoping that this preseason would show me something and for the most part, it didn't.

A lot of the problem was the format.  Five games in five nights was absurd.  It left just four games where we saw anything resembling the actual lineup and generally when the Leafs were fully stocked, the opposition wasn't.  As a result, their 5-3-1 preseason record is about as meaningless as I can imagine and I have no idea at all whether this team will be competitive or not.  I hope they will be, I dread what will happen if they aren't.

Don't get me wrong.  Given a choice between what happened last season and what happened 20 years ago with the Kurvers trade/Lindros draft, I'll take last season 100 times out of 100.  I liked most of the moves.  I like that this is a young team where most of the players have (I think) the potential to do more in this league than they have shown to date.  1990-91 was about shedding the future to squeak into second-last.  Last year was about acquiring a future, whether it meant second-last or not.  That's huge.

I'm just not interested in seeing it again, that's all.  :)

So far, this post hasn't been about Kurvers at all.  Truth is, though, it seems to me like a lot of the talk about the Kessel trade is really talk about Kurvers.  It is the filter through which all trades of Leaf draft picks are viewed.  The Luongo pick is bad, but it's worse because Toronto traded Niedermayer for Kurvers.  Giving up Seguin is bad, but it's worse because it's a continuation of the pattern set with Kurvers.  It's funny that 20 years ago, it was something of a relief when New Jersey had to settle for Scott Niedermayer.  He was expected to be good, but compared to Lindros, well, there really was no comparison.

For all the criticism of the deal, Tom Kurvers was not a bad player.  He was brought in to be a second/third option for offense from the blue line.  The Leafs had Iafrate and Ramage and wanted a little bit more punch.  He was exactly as advertised.  In 70 games in '89-90, Kurvers put up 52 points.  The Leafs could really move the puck with their defense, and the team scored a ton of goals (giving up, of course, and ton and a bit along the way).

In '90-91, the team struggled and he didn't look great, but then again, nobody did.  There were a ton of injuries, nobody could score, everyone was slumping.  Kurvers hurt a knee early and then was dealt for Brian Bradley, who didn't score a single goal that season for the Leafs.

That made the deal particularly brutal.  Not only were the Leafs lousy and giving up a really high pick, but the guy they got had already been dumped for almost no return.  Bradley would be lost to Tampa in the expansion draft of 1992.

Seriously - Kurvers was shipped out of town before the Niedermayer draft even happened.  That's awful.  Kessel, all things being equal, should be around for years.  Kurvers wasn't around 18 months.

Maybe if he had been able to play four or five seasons here, that would have helped.  Of course, he could have been Larry Murphy-ed out of town.  You never know.  His post-Leaf career was played out controversy-free in Vancouver and Long Island.  He's probably not unhappy about that.

I'm hoping for a handful of things this year.  The playoffs would be great, but I want to see progress.  I want to see the team improve and look good for a number of years.  I want the kids to be brought along properly and set us up for a long time to come.  I also want Boston to draft at least tenth and get someone we'll immediately forget.  No offense to Bruin fans, but I think you've done well enough already.

I also want, a few years from now, for the Kessel deal to be thought of not in terms of the Kurvers trade, but in terms of the Dan Maloney trade instead.  (Now, I don't wan this in its entirety, because one offshoot of the Maloney trade was the return of Punch Imlach.  This, or it's modern-day equivalent, would be a bad thing.)  The Leafs gave up a little bit more, adding scoring winger Errol Thompson to the pair of first-round picks.  Anyone know who the Wings drafted?

That would be nice.

Visit the Tom Kurvers Gallery at the HHOF.

What the HHOF has to say about Tom:

Tom Kurvers was a pure offensive defenceman with outstanding passing skills and a quick release from the point. In his eleven years in the NHL he was a considered a positive influence on the ice and in the dressing room.

Born in Minneapolis, Minnesota, he scored 175 points in four seasons at the University of Minnesota-Duluth between 1980 and 1984. His talent was noticed by the Montreal Canadiens who drafted him 145th overall in the 1981 NHL Entry Draft.

In 1982 Kurvers represented the United States at the World Junior Championships. His senior year was the most individually rewarding as he scored 76 points and was the recipient of the Hobey Baker Award as the top U.S. collegiate player. Kurvers was also placed on the WCHA first all-star team and the NCAA West first All-American team.

Kurvers enjoyed a fine rookie season with the Habs in 1984-85 when he played a regular shift and scored 45 points. By the start of his third year in Montreal, Kurvers was caught in a numbers game a traded to the Buffalo Sabres for a 2nd- round draft pick. He scored 23 points for the Sabres down the stretch in 1986-87 then played for the U.S. at that year's World Championships.

An off-season deal in 1987 brought Kurvers to New Jersey where his offense sparked the Devils to an improbable playoff run that finished one game short of the Stanley Cup final. That year Kurvers was the second-highest scoring blueliner in the post-season with 15 points in nineteen games. The next year he recorded a personal high 66 points but, by 1989-90, was considered expendable when the Devils opted to use Bruce Driver to quarterback the power-play.

Early in the 1989-90 season, Kurvers was shipped to Toronto for a first-round pick that became Scott Niedermayer. The Maple Leafs had too many offensive players who could not cope with the tight checking of the post-season. Kurvers was dispatched to Vancouver in 1990-91 and later played with the New York Islanders and Mighty Ducks of Anaheim. Before retiring he played the 1995-96 season in Japan with the Seibu Tetsudo club of Tokyo. Kurvers was never a defensive stalwart but he played to his strengths and, when paired with the right person, could be very effective. He finished with 421 points in 659 career games. 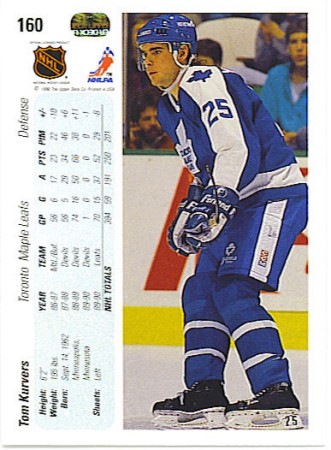