Share All sharing options for: Got Gas? The Esso stickers of 1970-71

The objective of each new day is to learn something.  Yesterday, I learned that if I want to write anything on this site, I'd better not be reading it.  I was merrily into a Simon Gamache Leaf of the Day piece when I decided to verify a handful of my comments.  Off to the web I went, stopping on the front page and immediately heading down the rabbit hole of 5v5 save percentage.  So much for Simon.

As it turns out, though, what I did find about Simon made him less useful than I had hoped, so he can go back into the pile.  Today's Leaf was actually going to be Tomas Kaberle, but we've had enough posts on him for the moment.

So let's do collectibles instead.

While the main thing I like to deal with are mainstream hockey cards (Topps, Parkhurst, OPC, Upper Deck), there are a lot of sidebar things produced by other companies that are often really interesting.  I have cards that were included in cereal boxes, pastry boxes, peanut butter tins, cut out from soup boxes, etc.  Loblaws has put out hockey sets, as have various police forces.  Coke put out a set, and thousands of kids collected pictures from Bee Hive Corn Syrup or Crown Brand.  They're all interesting in different ways and over the year we'll look at a bunch of them.

Esso has put out a number of sets over the years, sold with various promotions they were working on.  The oldest of these that I have is from 1970-71.  If you went to Esso that year, you could get a booklet with six stickers in it, each of which you could then keep in a special Esso wallet or paste into either a softcover or hardcover album.  I don't have the albums, but I do have the stickers.

There were 252 of them, 18 stickers for each of the 14 teams in the NHL.  They were about the size of a large postage stamp, maybe an inch and a half tall.  Since there were no stickers for trophy winners, all-stars or checklists, this actually made it the biggest set out there in terms of actual players depicted.  (OPC had 264 cards, but gave up a bunch to awards, etc.)

They're cool for a number of reasons, but there are a few that stand out to me.

The first is that this is the only product you could get in 1970-71 that had actual game shots in it (see above).  Everything else that you could get at that time used posed photographs, and it had been this way for years.  The Star had had some action photos you could get in about 1964, and prior to that, the last mainstream cards produced using mostly game-action photos were from 1954.  OPC and Topps wouldn't get into action shots at all until 1972, and most cards were still using posed pictures until about 1977.  For early 1970s action shots, Esso was it.

For goalies, this means you actually get to see them in gear.  This, to my knowledge, is the only card produced during Gerry Cheevers' career that actually shows him in that famous mask. 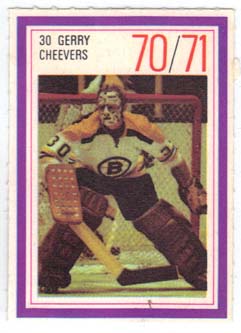 Another reason why this set is cool is that the shots are all up to date.  Vancouver and Buffalo were expansion teams, but Esso managed to get current game action pictures of every player for both teams.

Also new for 1970-71, Toronto unveiled a new uniform.  Every Leaf player in the Esso set is shown wearing it. 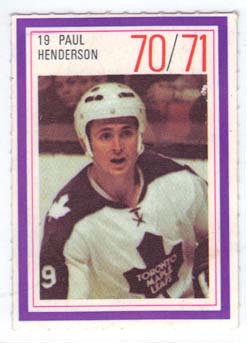 OPC and Topps, a little slower to react, were still showing some players wearing the old one until 1972-73. 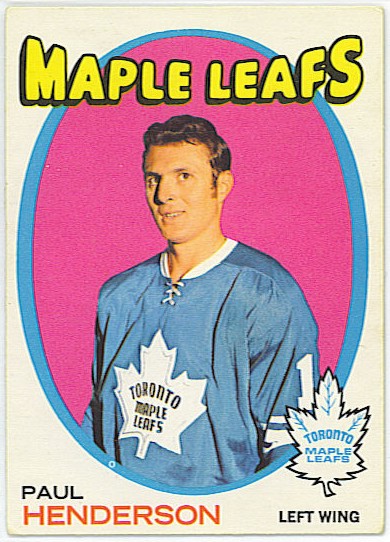 The final thing is that since the Esso set had more players in it than anyone else (I'd say three extra players per team, on average), there are certain players here that are never seen otherwise, or at least never seen with the team they played for in 1970-71.  Phil Myre (who was in Atlanta for most of the 1970s) is among the Montreal Canadiens goalies.  Detroit has Al Karlander (I know - who?) and Danny Lawson (probably most famous with the Calgary Cowboys).

For Toronto, Esso has the forgotten rookie of 1970-71 - a guy you simply never see.    The most famous rookie that year, of course,  was Darryl Sittler. 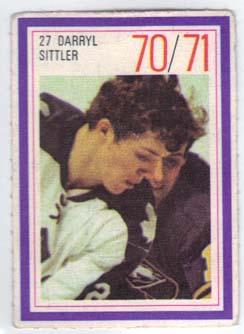 While Sittler went on to fame and fortune despite only an 18-point rookie season (wrist injury), another rookie - a guy named Bill MacMillan - actually potted better than 20 goals. 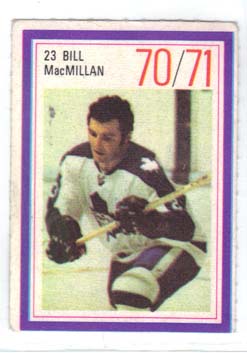 Bill, a couple years older than Darryl, could never repeat it and his role dwindled to the point that he was exposed in the '72 expansion draft, in which he went to the Islanders.  He'd play into the mid 1970s as a defensive forward with the Isles and Flames.  This is the only time you see him as a Leaf.  Topps/OPC didn't make a card until he was with New York and Atlanta. 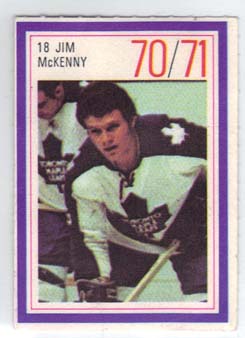 A number of these things were short-printed because the album had a couple players per team printed directly on the pages.  Why they were then also printed as stamps is a bit of a mystery - maybe for people who never bothered with the album.

So there you have it, something a little different and not only does it not involve Simon Gamache or Tomas Kaberle, it gives a little overdue love to Bill MacMillan.  That works.

All other Collector's Corner posts are here.

(Note - edited to clean up various grammar glitches and other points of incoherence.)