As per thinkgeek, there are only 10 types of people in the world: those who understand binary and those who don't.

Back on the first, @RobCollingwood tipped me to the fact that I'd been napping and missed out on a binary date.  Today, with that great ugly 8 (or 9, depending) in it, is not one, but there will have been two by the end of the long weekend.  Sunday, when I'll hopefully be knee-deep in turkey, will be 10-10-10 (I like this one because there's no debate as to which order things run.  My preference is YY-MM-DD.)  This, of course, is 42.

Number 42 would ordinarily be BOZAK!!!1  I have a personal bugaboo about having current Leafs as LotD (it's bad luck, I've tracked it) which leaves (Leafs?) me with names such as David Cooper and Kyle Wellwood.  Kyle wins.

All it took was one poolside shot of a somewhat well-nourished Kyle Wellwood talking to a rather attractive female type to label him forever as lazy and out of shape.  His play, of course, had a little to do with that as well.

It was a real disappointment for me because I was a serious Kyle Wellwood fan.  He was my favourite prospect and well on his way to becoming my favourite Leaf.

It wasn't always that way.  When he was first a Marlie, he had this profile picture (I can't even bear to go look for it) that made him look like either an extra from Deliverance or Doc Boy from Garfield, which is really about the same thing.  I couldn't fathom anyone who looked like that being an actual player.  (It really was a dreadful picture.  There ought to be a law.)

When he first came up, Quinn put him out there on a line with a couple other kids.  I can't remember who they were playing, but it was the top line for the opposition.  The rooks were immediately scored on and I'm not sure they saw another shift.

During the lockout year, though, Wellwood was fantastic.  He earned himself a spot on the Leafs the following season and I got hooked.  I loved the way he handled the puck, the shifty little way he skated and the fact that you never knew what he was going to do.  He'd head into the offensive zone, give a little fake and then put a pass through to the last person you'd expect.  The last person I remembered who played like that was Gilmour.

My hopes were high.

In '06-07, he got into trouble with the sports hernia.  It was then I started to see postings here and there questioning his conditioning.  I tended to think that hernias were things that basically just happened and didn't pay a lot of heed.  For Kyle (and the Leafs), it was a terrible year to get it because when he was playing, he was close to a point per game and was looking like a real threat.  He came back from that surgery and buried the Habs in the last game of the season, knocking them out of the playoffs and briefly putting the Leafs in.

2007-08 was a disaster offensively and in terms of health.  There was the story in the summer that Kyle hadn't rehabbed much at all and he seemed permanently in the doghouse.  There was more talk about conditioning, or lack thereof.  In the summer, Fletcher went so far as to waive him rather than offer any kind of deal.  He just wanted him gone.  (Years earlier, Fletcher had another really talented guy in Kent Nilsson that managed to drive a lot of people nuts.  I wondered if this was why he wasn't willing to let the Wellwood situation fester.)

It was a shocking fall, really.

For a handful of games in '08-09, Vancouver (who'd grabbed him) appeared to have made a great steal.  Very much Stempniak-esque, Kyle quickly had about eight goals in as many games and Don Cherry (and a number of others) ripped the Leafs for bailing on him.  The talk pretty much subsided when he only scored another 10 the rest of the way and added 9 assists, which is pretty brutal for a playmaking centre.
Canucks fans lauded his attention to detail defensively, but for a player whose bread and butter was his offensive creativity, that's kind of damning.  It did get him two more years in the NHL, though.

Kyle Wellwood signed a week ago with Atlant of the KHL.  With him, he took the "Well-fed" meme, but in our hearts and minds, that will always be with us.  Probably seated poolside.

Visit the Kyle Wellwood Gallery at the HHOF.

What the HHOF has to say about Kyle:

Kyle Wellwood was born May 16, 1983 in Windsor, Ontario. The sixth choice, 134th overall selection of the Toronto Maple Leafs in the 2001 NHL Entry Draft, Wellwood is a graduate of the OHL.

An offensively gifted forward, Wellwood played four seasons in the OHL (99-2003) with stops in Belleville and Kitchener registering 352 points (112-232-352) and was an OHL First Team All-Star in 2001 before making his professional debut during the 2003-04 season. A member of Canada's Silver Medal World Junior team in 2002, Wellwood spent the majority of the 2003-04 season with the AHL's St. John's Maple Leafs, registering 55 points (20-35-55) in 76 games, while making his NHL debut with the parent club early in the new year.

During the NHL lockout, Wellwood returned to St. Johns where he tallied 38 goals (fourth best in the AHL), and 87 points. In his rookie NHL season, Wellwood saw action in 81 games with the Maple Leafs but struggled to produce offensively. After an injury plagued 2006-07 season, Wellwood suffered a sports hernia before the start of the 2007-08 campaign. He returned to the line-up fifteen games into the season but required minor surgery once the Leafs were mathematically eliminated from the post-season.

With his contract set to expire, the Maple Leafs placed Wellwood on waivers on June 24, 2008. He picked up by the Canucks and signed to a one-year, $997,500 contract. 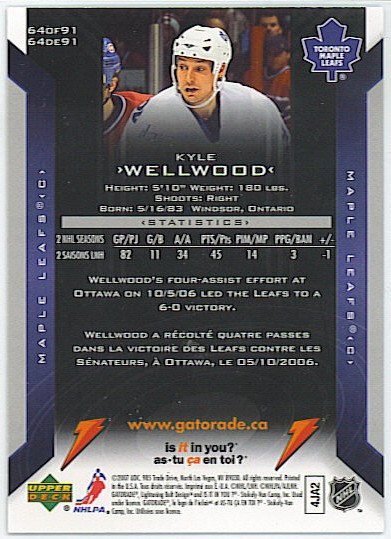