Kris Versteeg was unsurprisingly at fault for a goal.

In the recap for the Leafs' 3-2 loss to the Senators I suggested that Kris Versteeg needed to take a page from Nikolai Kulemin's book. While the latter was working his tail off and taking care of the little things in his game, the former was cheating to look for goals. The third Lightning goal, in the last minute of the first period, was another instance of that attitude.

I'd show you the initial build up to the goal but whoever cuts together these games in six usually don't give enough of the build up for my liking. Anyway, all you need to know is that Colton Orr had the puck about two feet from the blueline and Versteeg flying up alongside. Rather than communicating Orr tried to chip it off the boards. It was predictably stopped and the puck dumped into the corner. Meanwhile, Versteeg flew down almost to Tampa's blueline leaving the situation as such: 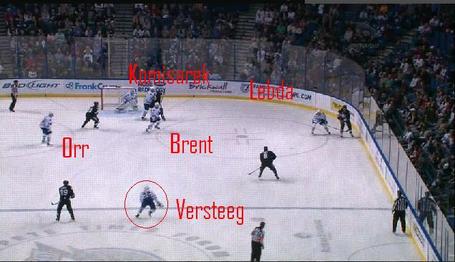 The way I see it: Brett Lebda has his man properly cornered off, Tim Brent should have had Dominic Moore as a starting point but he's right to start rotating out to cover the open ice, and Randy Jones is the beneficiary of the time and space provided to him by Versteeg sight-seeing excursion. 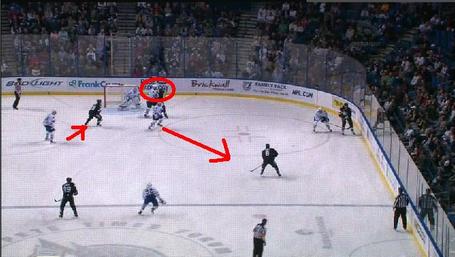 The way that I see that the play should have evolved is above. It would involve doing something that Toronto has never been adept at: communicating. To keep the play under control I'd have like to see Tim Brent come out to pressure the puck, Colton Orr rotate down to tie up Dominic Moore, and Mike Komisarek stick to his man. That would leave Lebda with his man and then Ghost Rider could pick up the other defenceman. Simple enough no? No. 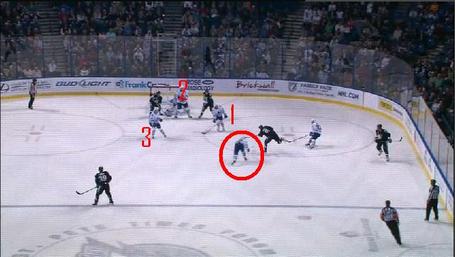 Instead we are treated to three things in addition to watching Kris Versteeg chicken scratch:

All three combine to give us this final glimpse of the goal: 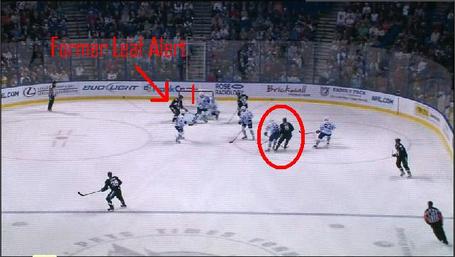 In the circle you can see that Versteeg finally caught up to his man. Too little too late of course. Meanwhile, Komisarek manages to tie up no one. Instead he helps Brent screen Jean-Sebastien Giguere. All of the while Dominic Moore is alone to the side of the net waiting to redirect Jones' pass into the gaping net to seal the points.

When Ron Wilson speaks of a lack of effort and I suggest that I see it more as a lack of intelligence I think we're just using different ways to describe the same thing. You could say that the players on the ice are not putting enough effort into thinking about what they are doing. Because this is recently put together team they do not have the benefit of familiarity with each other and the systems. That's not to give Ron Wilson an excuse but it does highlight why it is so vital that the Leafs give their best effort on every shift in every game. Right now they are the high school quarterback that doesn't study his playbook. Sure, they'll probably still take a cheerleader or two home but they aren't skilled enough to win any games.