Barbarino was a Leaf fan.

Share All sharing options for: Barbarino was a Leaf fan.

One of my newfound favourite blogs is Cardboard Gods.  It's run by a kid from the 70s who takes his old baseball cards and uses each as an entry point into some dissertation on life.  In other words, he's basically me, except that he's American, focuses on baseball and has a book.  It looks like a good book, too.  I've asked someone else to actually spend their hard-earned money on it so's I can have a copy for my birthday.

The author's card collecting adventure seems to have begun in 1974 at the age of six.  I wasn't six until two years later, and my first cards weren't hockey.  They weren't even baseball.  They were ten-cent packs of Welcome Back Kotter cards, purchased from a camp store at Pine Lake, Alberta, where we'd go with the neighbours several weekends each summer for 2-3 years.  I don't think I even watched that show until about 1978, but I had the cards.

My original thought for these was to use them in a one-off Collector's Corner installment about the other types of things you could get from OPC and Topps in the olden days.

Now that my horizons have been expanded by Cardboard Gods, though, I am going to take a deeper look and see just what they can tell us about the human experience of fandom.  My suspicion is that they won't tell us much at all, but hey, I'm a gamer.  Besides, it beats talking about the Leafs.

The first card in the series features John Travolta as Vinnie Barbarino, uttering the single most important catchphrase of the entire Welcome Back Kotter franchise.  In the 1970s, "Up your nose with a rubber hose" joined the North American lexicon the same way that "Ay carumba" or "Swiper, no swiping" would a generation later.

But what does it mean?

At it's core, it's a statement of defiance - an unwillingness to accept the  circumstances that have placed us in whatever debased position we find ourselves.  It signals to the authorites that be that we will not be cowed or manipulated into doing whatever it is that they wish us to do.  With Travolta foreshadowing a stance he'd later make famous in a white jumpsuit, posed in front of the American flag, it is a projection of our own power and strength.

At the same time, it rings rather hollow.  The image is not really that inspiring.  The flag hangs limply.  Nothing stirs it.  There is no wisdom scrawled on the board behind him.  Whatever words there once were have been erased and you kind of know that whatever was once written there, Barbarino doesn't remember it.  He is protesting nothing in front of a vaccuum.

(It should be noted that if you're the kind of person who is prone to sinus infections, the regular irrigation of the nasal passage really helps reduce the frequency and severity with which they occur.  In this sense, "Up your nose with a rubber hose" is practical advice, so long as the hose is delivering a saline rinse of some sort.  I kind of doubt that Vinnie Barbarino has ever had a sinus infection, though.)

The back of the card has a joke.  It differs from most of the jokes one sees in these sorts of things in that it's vaguely funny.  It's not the kind of line I see Barbarino delivering (his other catchphrase was, "Whut?") - to me it sounds more like something Washington would say, or maybe Epstein.  Still, it kind of works. 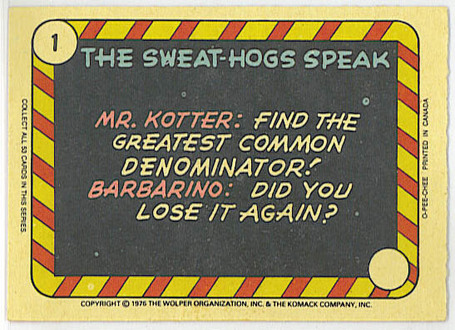 So what is the greatest common denominator?  Well, I suppose that it's our common humanity.  We all are human.  We all love our kids (assuming we have them).  We mostly hate watching losing hockey.  It kills the soul.

So what is the message of this card and how does it relate to the greater experience of being not just a valuable human being, but perhaps something greater, like a Leaf fan?

It says to me that we are right to voice our displeasure, even if it's ultimately futile.  If we are told not to boo, not to get on the coach, not to act as typically irrational fans are wont to do when their team is meandering through yet another disheartening loss, we should not accept this.  "Up your nose with a rubber hose!"  That can be our mantra.

Beyond that, though, remember that we are all fans.  We all want to win, preferably sooner than later but always someday preferably to not at all.  No matter what adversity we are faced with, we have common cause.  Let us not set upon each other.

Remember, too, the words that aren't written on the blackboard, whatever they were.  They might have been important.

You know, I think this was actually worth one-eighth of ten cents, assuming the cards came about eight to a pack and the gum was free.