Share All sharing options for: Syl Apps - My Grandfather's Leafs

Last year on Remembrance Day, I talked about Alan "Scotty" Davidson. If there's one player in Toronto history that I'd like to have added to the traditional Leaf mythology, it's Davidson. For those who forgot, he was the captain of the 1914 Blueshirts, an emerging star and leader of his team. Fresh off his victory, he enlisted in the military and was part of the first wave of recruits in WWI. He served in Europe and was killed in Flanders in 1915. If he'd been part of any other team, there would be a trophy named after him. Unfortunately, he was a Blueshirt, and they were wiped from the collective memory banks.

Toronto had other players enlist, though. The Second World War saw a great number of players walk away from the prime of their career to serve. Of those, few were of higher profile than Leaf captain Syl Apps.

When you get into the stories of most players, they basically come off as human. They have their strengths and their faults, some tending more to one side than the other, as we all do. Syl Apps, though, reads as though he was something dreamed up by a comic-book writer. Tall, athletic, a beautiful skater with fantastic hands, he captained one of the most famous hockey teams on the planet to multiple championships. At the same time, he's the sort of ramrod-straight character who never so much as utters a curse word. He's Clark Kent as well as Superman. Jack Batten described him as "the Stainless Hero."

Syl Apps was an Olympic pole vaulter at the games of 1936 in Berlin. The Leaf scouts had had him on their negotiation list for a while, and signed him before the start of the '36-37 season. While Conn Smythe had some reservations that a person with a name like Sylvanus Apps could ever be a hockey player (hmm - they have this story in the HHOF bit below, maybe I should read that before I finish this), Syl won the job and was installed in the position of the recently-retired Joe Primeau, centering the Kid Line with Conacher and Jackson. Conacher injured his wrist after a handful of games (the beginning of the end for Charlie) and was replaced by another rookie named Gordie Drillon. That line lit up the NHL and Apps led the league in assists and won the Calder.

While a number of top offensive players would be shuttled off the Leafs under Hap Day, Syl not only survived, but thrived. He was named Leaf captain in 1941 and led them to the 1942 Stanley Cup, their first in a decade and the one in which the Leafs came back from a 3-0 deficit in the Final. Syl talked of the pride that they had in wearing the Maple Leaf uniform and how they felt that after Game 3 that they simply wouldn't be able to face the fans in Toronto if they went out four straight.

(A number of other factors played into that comeback. Hap Day benched Gord Drillon and Bucko MacDonald and inserted rookies Gaye Stewart and Don Metz. They also made a tactical change. The Wings had been doing something considered novel at the time, dumping the puck into the Toronto zone and roaring in after it. (remember, everything was new once.) In a league in which puck possession was given up under pain of death, this was a radical departure. It took the Leafs three games to simply start dumping it right back out and catching the Wings far too deep in the offensive zone. That's what I read, anyway.)

Syl lived his life by a very basic moral code. When he broke his leg part way through 1942-43, he went to Conn Smythe with a cheque, figuring that he shouldn't be paid if he wasn't earning it. Smythe, stunned, refused it. At the same time, it was a sound investment, as he figured that anyone who even thought in those terms would go out of his way to earn it when he got back. (Yes, they also tell that story below, but I like it enough to repeat it.)

That wouldn't happen right away, though. Syl, like a number of his teammates, joined the army prior to 1943-44. He'd miss the next two seasons.

The Leafs of 1945-46 should have been sitting pretty, getting a number of all-star players back. Syl, though, admitted that they spent most of the season trying to figure out their timing again. (For Syl, that still meant a point-per-game season and a sixth-place finish in goals despite missing 10 of 50 games.) The Leafs would add six rookies for 1946-47, many of whom were vets and they became the juggernaut of the late 1940s.

Syl would retire after 1947-48, going out as Stanley Cup champion again. He'd finished seventh in league scoring that season and fifth in goals. Over the course, of his career, he never had a season in which he was out of the top ten in points per game and his last two seasons were the only ones in which he placed out of the top five. He managed most of this under the defence-first system of Hap Day.

Syl was only 33 when he retired. Though Smythe and Day tried to talk him out of it,
he was of the mindset that it was now time to go and find a real job, and he held several. (Day told Batten that they had him talked into a comeback in 1949-50, but he decided against it and never showed.) He was elected to the Ontario legislature in 1963 and served for over a decade. He was a cabinet minister under Bill Davis, and conducted himself in such away that even the opposition critics had nothing bad to say when he retired.

That said, the cultural shift of the sixties wasn't easy for someone of his mindset. He had no use whatsoever for the hippie culture of Yorkville. Batten quotes then-NDP leader Stephen Lewis as saying that Apps' view of the world was that everyone would stay out of trouble if they could simply get enrolled in a good hockey program. Lewis smiled at that, but was quick to point out that if Syl was ever asked to get involved to help a young person heading for trouble, he'd be there and give what he could. That was Syl.

So today, a toast to the Scotty Davidsons of the world and a toast to Syl Apps, heroes both and worthy of remembrance.

Visit the Syl Apps Gallery at the HHOF. They have pictures like this one: 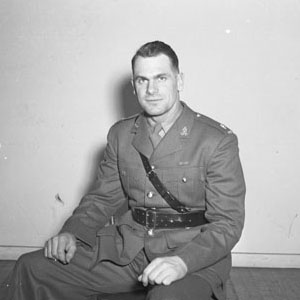 via www.legendsofhockey.net
This is the only video I've ever seen of Apps in action. Look for number 10.

What the HHOF has to say about Syl:

Perhaps never has a finer man played in the NHL than Syl Apps. A remarkably skilled hockey player, he was big and strong and possessed one of the best shots in the league. He never drank or smoked, never swore and was as loyal to his boss, Conn Smythe, as to his team, the Toronto Maple Leafs.

Smythe was alerted to Apps when a friend told the Leafs' owner of a great football player at McMaster University who was studying economics. When he heard the young man's name was Sylvanus Apps, Smythe laughed and said, "Nobody with a name like that could possibly become a pro hockey player." Still, he traveled to Hamilton to watch Apps play football. Smythe was so impressed that he offered Apps a hockey contract right then and there, but Apps declined, saying he still had to compete in the pole vault at the 1936 Olympics in Berlin. Apps had previously won the British Empire championship with a jump of 12 and ½ feet. And those were the days when poles were made of bamboo and players landed on their feet in a sand pit.

In his first NHL season with the Leafs, he won the Calder Trophy, the first Leaf so honored, and his career continued to flourish. During that first year, many players thought he was too nice and not tough at all. Flash Hollett discovered this belief was mistaken one night when he high-sticked Apps, knocking out two teeth. Apps dropped his gloves and pummeled Hollett, but he got into only two other skirmishes in his whole career. In 1941-42, he went the whole season without getting a single penalty and was awarded the Lady Byng Trophy for his gentlemanly play. At the end of that season, he led the Leafs to the most improbable Stanley Cup win in NHL history, a series against Detroit that he calls his career highlight. The Leafs lost the first three games of the finals to the Red Wings but somehow won the next four in a row to win the Cup, the only time this has happened.

Apps played on a line with Gord Drillon and Bob Davidson, and this unit quickly became the team's best line. He teamed with Harry Watson and Bill Ezinicki after the war, once again forming a powerful offensive unit. Watson and Ezinicki were ideal linemates for Apps because they could score goals and take advantage of Apps' ability to draw players to him before passing the puck.

Apps once crashed into the goal post during the 1942-43 season, breaking his leg. He missed almost half the season, and one day during his time off for his injury he went into owner Conn Smythe's office with a check for $1,000. "He was getting $6,000 for the season," Smythe recollected, "and he came to me and said, 'Conn, I'm making more than I deserve. I want to give you this check.' Well, I almost died of heart failure. Of course, I refused his check. I felt that anyone who thought in such terms was bound to square off what he thought was a debt the following season." At the end of that season, while in the prime of his career, he left the team to join the Canadian Army. There he stayed for two years until the war was over. When he resumed his career, he put the captain's "C" back on his sweater and promptly picked up where he left off.

In 1947 he was appointed the athletic commissioner for sport in Ontario. Later he became a Conservative member of the Legislature, representing Kingston. Apps was chairman of the select committee on youth until appointed Correctional Services minister in 1971. He is the only member of all three Hockey Halls of Fame, Canada's Sports Hall of Fame and the Canadian Amateur Athletics Hall of Fame, and in 1993 his number was honoured at Maple Leaf Gardens, one of only six so designated in franchise history.