Editor's Note: Phil Kessel is streaky. That's taken as gospel and is used as a knock against him. But is he anymore streaky than any other sniper? Bower Power took the time to find out. 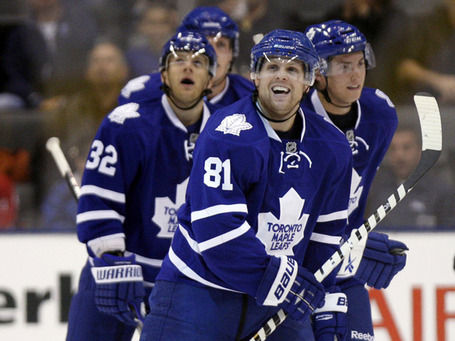 The question has come up countless times already – Is Kessel too streaky of a goal scorer? Do his droughts drag down his status as an elite goal scorer? Looking at his last 83 games and comparing them to peers, it looks like he doesn't suffer much more than most.

A brief paragraph on methodology. First of all, what’s a streak? For the purposes of this post, a cold streak is any two games where a player goes back to back without goals. Games of 1, 0, 1 is not counted as a cold streak. Games of 1, 0, 0, 1 is counted as a 2 game drought. For the section on hot streaks, a single goalless game does not interrupt what would be a hot streak. So in that section, games of 1, 1, 0, 1 is actually counted as a 4 game hot streak. 1, 1 is counted as a two game hotstreak, and 0, 0, 5, 0, 0 is not a hot streak. Kessel had been a Leaf for 83 games when I started working on this post, so I’ve grabbed the scoring data for Jeff Carter, Bobby Ryan, Rick Nash, Danny Heatley, and Alex Semin over their last 83 games.

So the biggest thing is Kessel’s average drought; Kessel does take longer to "get hot" than the comparables we’ve pulled. His drought averages 4.09 games, compared to Semin’s low 2.87, and compared to the 3.56 average of all skaters (that average raises to 3.64 without Semin and to 3.6 without Semin and Kessel).

Though Kessel has had the longest droughts on average, his 11 droughts are the fewest of all our skaters in the last 83 games. He’s been cold for 6+ consecutive games three times, with a max of 8 games without a goal (Note: Now that he hasn’t scored against TBL and FLA, this number has become four times). And though Kessel's streaks have been fairly unbearalbe, he has yet to top Rick Nash’s 11 game goalless streak! But how is Phil once he turns on?

Kessel’s 6 scoring streaks are slightly below the average 6.67, and his streaks tend to last longer than others’, averaging 5.67 games of goal scoring (In this case, lower is better, since it means more evenly distributed scoring through the season).

But the good part about Phil’s hot streaks? He has just 7 multi goal games, and has yet to score a hat-trick. This isn’t 10 games of nothing, show up for 4 or 5 goals in one game, and then head out for another month. His hot streaks are long and sustained, consistently contributing to games for a long period of time.

So what does all this say about Phil?

First of all, yes. Phil is a streaky player. But when compared to the average "streakiness" of players, it’s probably not as bad as you thought. We’re wading through one of them right now – one more goalless game will tie his Leaf high. But it should end shortly, and it should trigger a five to seven game streak of goals. Which should spark a turn in the Leafs’ record; the Leafs are 15-38 in their last 83 when Kessel hasn’t scored and 19-11 when he has (OTLs counted as Ls).

But as far as development goes, it’s important to remember he still has a ton of "upside." This post has compared Phil to dominant shooters in what is expected to be their physical peaks with strong line mates. If a good, complementary centerman is one who helps a goal scorer shrink cold streaks and extend hot streaks, and if experience and size contribute to goal scoring, it's clear that Kessel is at a disadvantage in both categories against all opponents. There is no doubt in my mind that with teammates and time, Kessel will routinely be able to hit a 40 goal pace in his mid-to-late 20s.