One of the more pleasant things about this season's Leafs team is the absence of a cringe-worthy goaltender.  Now, the past handful of seasons have been particularly bad in that the goalie to strike fear into the hearts of teammates and fans alike was actually the starter, but even in times when the starter was good, the backup was generally someone the team tried to hide.

There were moments, I suppose.  The GRBRZRKER arrived and played OK for a bit, J.S. Aubin took the team on an improbable run and Corey Schwab shocked pretty much everyone by stepping in and holding the fort for a month when Curtis Joseph broke his hand.  For the most part, though, if you knew that Trevor Kidd, Glenn Healy, Don Beaupre or whoever was going to be starting, you approached the game with a bit of trepidation.  Even Tellqvist, who was probably the best of the lot, never inspired a ton of confidence.

To me, the last Leaf backup who was a perfectly acceptable starter for any given game was Damian Rhodes.  I know that for me, if I heard that Rhodes was getting a start, my reaction was never, "Oh (expletive deleted)."  It was simply, "oh, that's OK."  If the Leafs were to lose that night, it wouldn't be because of the goaltending.

Damian Rhodes got his first NHL start so that the Leafs could give him away for nothing.  On March 22, 1991, the Leafs played a game in Detroit.  That year, of course, was a complete disaster for Toronto and was the season in which the team was gutted in a desperate attempt not to finish last and hand Eric Lindros to the New Jersey Devils.  By this point, though, the trading was done (the deadline was over a week past), they had an 11-point cushion on Quebec with just five games to play and there was time for a little roster move.  The brand-new San Jose Sharks were going to start play in '91-92 and there would be an expansion draft that summer.  One requirement was the exposure of a goaltender with "NHL Experience."

Damian, then 21, was a sixth-rounder in 1987.  He'd played at Michigan State until joining Newmarket of the AHL at the start of the season.  Newmarket was just as bad as the Leafs were, so his record was less than stellar.  The Leafs had Peter Ing, just 21 himself, and Jeff Reese, then 24, with the big club.  The Leafs probably could have exposed Reese without too much worry, but exposing Rhodes was safer still.  He got the start at the Joe, and surprised pretty much everyone by beating the Wings 3-1.  Detroit was still a year away from becoming the team they've been for the past two decades, but they were significantly better than the Leafs (almost everyone was).  It was a nice little accomplishment.

Rhodes then disappeared back to the minors and was forgotten for the next two seasons.

When Rhodes got his next NHL opportunity, it was basically with a different franchise.  It was 1993-94.  This was the Burns/Gilmour era.  The Leafs had seen Grant Fuhr and Daren Puppa come and go (Puppa actually was lost in an expansion draft just like Rhodes was supposed to have been) and there was a backup job available behind the new wunderkind, Felix Potvin.

The Leafs won their first seven games that season, putting them one short of an NHL record set by the Leafs of 1934-35.  Felix Potvin made all seven starts.  Game 8 was to be played against the Florida Panthers, an expansion team that Roger Neilson had playing at a surprising .500 clip.  With a shot at the record on the line, Pat Burns surprised a lot of people by turning to his backup.  Damian Rhodes would make his first NHL start in 2 1/2 seasons.  The game was tight.  Florida won by checking everyone into the ground.  Trailing 3-2 heading into the third, Florida tied the game at 3 when Andrei Lomakin buried one at 13:17.  The game was tied through regulation, then Rob Pearson scored his sixth goal in eight games, fed by Clark and Cullen, at 2:17 of OT.  The Leafs had tied the record.  They'd win two more before finally losing.

(Note - a lot of the hockey commentators then started immediately discounting the Leafs' record, saying it was tainted because they'd needed OT to win one of the games.  They collectively managed not to realize that the NHL had had OT in 1934-35 as well, and the '34-35 Leafs also had an OT win in that streak.)

Rhodes would end up winning his next four decisions (giving him six straight to start his career) before giving up a tie to Winnipeg and a loss to Anaheim in December.  It was a pretty good run.  He'd finish that season with 9 wins, a .902 save percentage (a Leaf team with two goaltenders at better than .900 was all but unheard of - the '80s were typically between .860 and .885) and a GAA that was actually a bit better than Potvin's.

He'd follow this with a very solid '94-95 and first half of '95-96.  In late January, the Leafs had hit the skids.  They'd been really solid through Christmas, but then the wheels came off.  This skid (the Leafs went 3-15-3) would eventually cost Pat Burns his job.

Somewhere along the way, it became clear that the Leafs really, really wanted Kirk Muller, who was not having much of a season with the Islanders.  It hung in the news for ages.  On Jan. 23, 1996, the deal went down.  It was a three-way trade with Ottawa.  The Isles and Sens swapped Wade Redden and Bryan Berard, the first two picks of the previous year's draft, the Leafs sent Ken Belanger to the Island and Rhodes to the Sens, and got back Muller and Don Beaupre.

Damian Rhodes instantly became the best goalie the Sens had had to date.  The first game post-trade was against Toronto at the Corel Centre.  I was there.  Rhodes was brilliant.  The Sens were outshot 44-25, but were only down 2-1 when Daniel Alfredsson scored with ten seconds left in regulation.  The Sens fan in front of me jumped up and swung both arms, drilling me in the right eye.  (I learned at this point that if the home crowd jumps, you jump with them, no matter what you think of the play.)  The game finished as a 2-2 draw.

Rhodes lost a lot of games that first season, but the Sens were gradually becoming better.  He started for them in their first playoff run and played well.  There would be injury troubles, though.  He'd end up going to yet another expansion team, becoming the first player acquired by the Atlanta Thrashers.  Injuries and inconsistent play did him in.  He wound up with career mark of 99-140-48, which was mainly the result of playing behind some really rotten teams.

Along the way, he got credit for two goals - the first was scored while he was at Michigan State, the second came as an Ottawa Senator.  He got the goal (and a shutout to go with it) against New Jersey on Jan. 2, 1999 when a Devil put the puck in his own net.

The Rhodes trade was not a good one for Toronto.  Muller's arrival did nothing to stop the slide.  He'd be dealt a year later for Jason Podollan.  Worse, Beaupre never won a game as a Leaf, going 0-8 in 11 appearances with a GAA of 4.84 and a .843 save percentage.  Over the next handful of seasons, the Leafs tried any number of goalies as backups, but never really hit on one that was quite as steady as the one they'd sent away.

Visit the Damian Rhodes Gallery at the HHOF.


What the HHOF has to say about Damian Rhodes:

Damian Rhodes held a dream of playing in the NHL since his early childhood. It started while playing "knee hockey" in his family basement with a local buddy. The two would scamper about on their knees, savouring that feeling of making the glorious glove save.

From the moment that puck entered his mitt, Rhodes knew that goaltending would be his position of choice. He entered the rich tradition of Minnesota's youth hockey programs and progressed through the ranks to backstop for the Michigan Tech Huskies from 1987 to 1990. While there, he made plenty of big saves but is perhaps best remembered for scoring a goal on January 21, 1989.

During his time with the Huskies, Rhodes was drafted by the Toronto Maple Leafs who, upon completion of his schooling, dropped him into their farm system for future reference. He started with the Newmarket Saints of the AHL for a season and then shifted east to share goaltending duties with Felix Potvin in St. John's. After the end of the season, Potvin caught on with the Leafs while Rhodes took over the helm in St. John's for one additional year before joining Toronto as Potvin's backup in 1993.

With the departure of Daren Puppa, Rhodes was able to pick up a handful of games each year while Potvin performed workhorse duties. But in 1996, the Leafs sent Rhodes to the Islanders who, in turn, flipped him to Ottawa as part of a larger trade.

With the Sens, he finally landed his first starting role. Victories, however, were a bit hard to come by in the early years. But as Ottawa's fortune's improved, so did Rhodes' bottom line. By the close of the 1997-98 campaign, he finally finished with a .500 record and a personal-best five shutouts. During the season that followed, he helped lead his team to the third-best record in the NHL.

But in 1999, the league underwent another expansion with the arrival of the Atlanta Thrashers. The club liked Rhodes' play, and made him the first-ever player signed to their roster. The move meant plenty of ice time and even more shots to face as his won/loss record took a turn for the worse. By November of his first campaign, however, he suffered a knee and ankle injury that sidelined him for 45 games. He has since bounced back and remains a central player in the Trashers' goal crease. 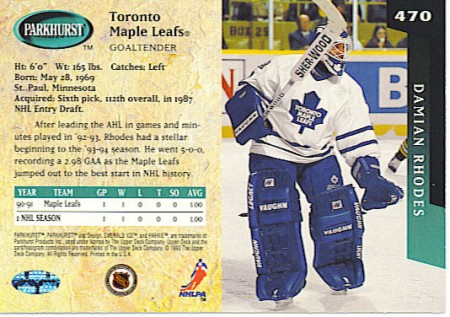