The Stars' Brad Richards found himself all alone in the Leafs' slot. Wonder how that happened... 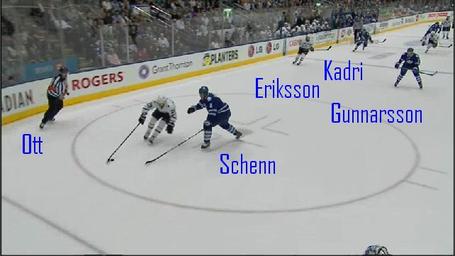 Pictured above is the kind of rush that happens a few times a game. It is usually handled quite easily by good teams and turned into a hash by the poor ones. Since we're writing about it you can guess which way this went for the Leafs. Above you can see every who is involved in the play, mostly, identified except for Tyler Bozak (on the right out of the picture) and Brad Richards (behind Gunnarsson). After the jump, you can see how this went from routine defensive play to frustrating goal against in four simple images. You'll start to see a theme in these posts today. 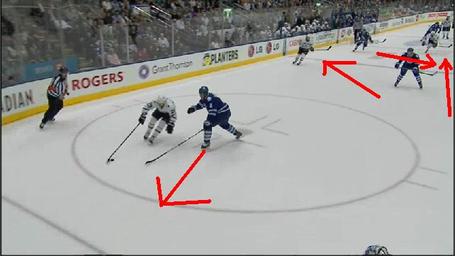 Here's how things should have played out. Luke Schenn has the puck carrier Steve Ott headed off towards the back of the net and under control. Carl Gunnarsson has Loui Eriksson covered to his right and the not pictured Tyler Bozak is back in time to pick up Brad Richards. Failing that, Nazem Kadri is right beside him and could also pick him up since his man is still at the other blueline. Wonder how that played out: 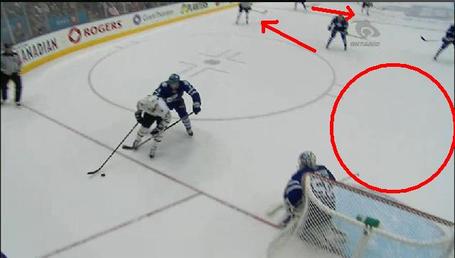 Schenn continues to keep Ott out of the danger area but that's a lot of open ice in front of Tyler Bozak. I hope he's ready to cover whoever is going to step into it. Either way, I bet Kadri's got Richards since he looked right at Brad. *Looks at the top of the picture* Oh shit. 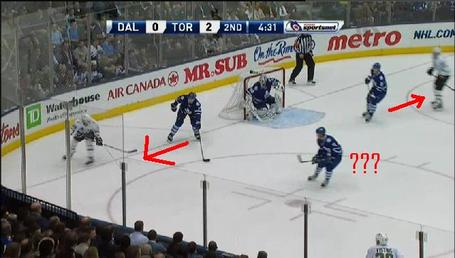 Schenn's backed off more than I would have liked but things are still under control. Well, except for Bozak covering no one and not looking over his shoulder. Gunnarsson ostensibly has Eriksson covered even though he too seems to ignore his blind side. Wonder what comes next? 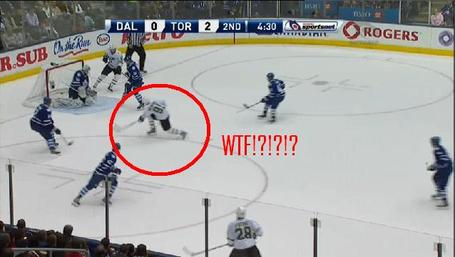 This is the kind of view you should get for winning the Best Seats In The House contest. Bozak almost misses it because he curled up ice. I have to assume that he thought there was a chance to wheel up ice because no one was in the slot. That's what happens when you don't have your head on a swivel. Nazek Kadri might not have been the primary player responsible for Richards but when you have a forward skate past you into open ice and no one else near you there has to be a reaction. To say "well, it's the centreman's man" is beer league hockey. At this level you have to read and react to the play and two of Toronto's young forwards failed on this play.