The normally defensively sound Nikolai Kulemin and Mikhail Grabovski were at fault for Mike Fisher's goal.

Share All sharing options for: When Good Players Go Bad 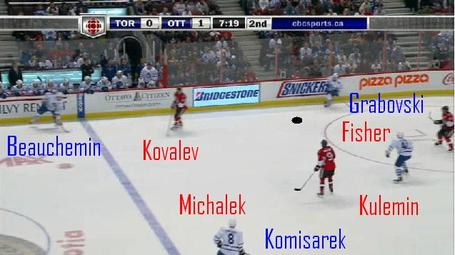 As you can tell by Slava Duris' scoring chances, the Leafs had been overrun in the early going Saturday night. The Senators had run the scoring chances up to 7-1 and the score to 1-0 before the Maple Leafs started to push back. They had been kept in a game that they didn't deserve to be kept in by the great play of Jonas Gustavsson and were knocking at the door for an equaliser.

Francois Beauchemin didn't make a great play by firing the puck into the middle of the ice to keep the play seemingly alive. The better play would have been to fire it along the boards into the corner but this one should have been under control. Of course, that was predicated on two of the Leafs' most dependable forwards not deciding to backcheck like rookies. 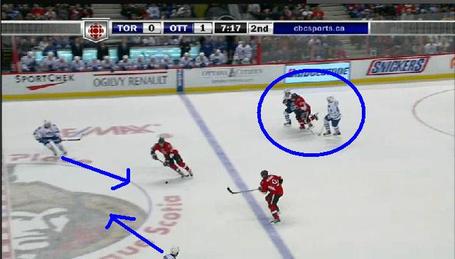 Things look pretty good right now. Beauchemin has Alexei Kovalev covered, Komisarek has Milan Michalek in his sights, and the ever dependable Nikolai Kulemin and Mikhail Grabovski have Mike Fisher, who has kicked the puck up ice, under wraps. Allegedly. 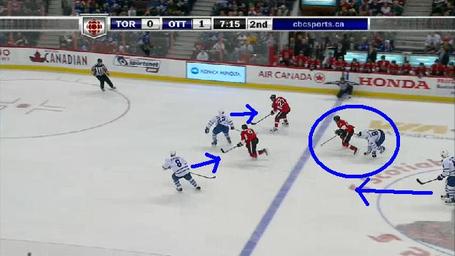 Again, the defencemen have the situation under control but Kulemin has stopped skating and Grabovski was just shrugged off by Fisher. 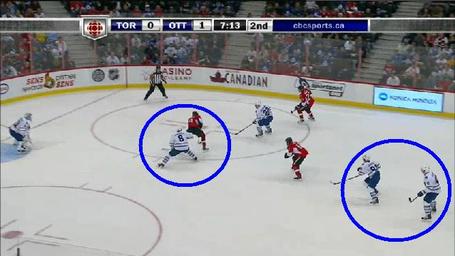 Kovalev made a nice pass into Michalek. I think Komisarek played this well. He has Michalek angled off and is getting between him and the net. The big circle on the right is where disaster happens. What started as a 2-on-2 and then a 4-on-3 rush is now a 3-on-2 with the late man about to waltz in alone from the slot. 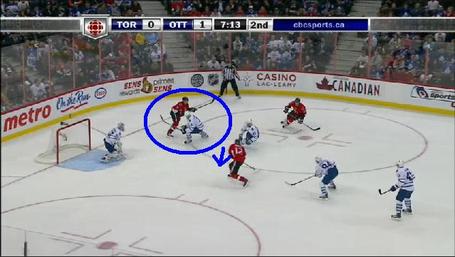 Beauchemin tries to make a valiant dive to recover the play but it's too little too late. 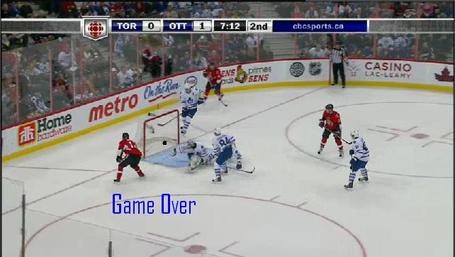