Sometimes a hot start is the beginning of something special, other times it's not.

The patron saint of the hot start that goes nowhere has to be Norm Aubin of the Leafs.  Norm was a scoring sensation in the Quebec league who was a third-round pick of the Leafs in 1979, 51st overall.

Norm had decent size and put up a ton of numbers, yet he was only rated #22 in the draft.  There was obviously something the scouts didn't like.  Given that it wasn't size, my guess is skating.  Of course, a couple years earlier, another high-scoring Quebec leaguer named Mike Bossy fell to #15 because of questions about his skating, so it was never a given.  He was certainly worth a shot at 51.

The Leafs of the early 80s (and ever since?) were often accused of rushing prospects, but that can't be argued with Norm.  He was left to spend his final year of junior and tore the league apart - he had 70 points in his first 21 games, then was traded and put up another 110 in his next 42.  He added 31  points in 14 playoff games.  You can't really argue with that.

Norm was then put in the minors.  He gave a good account of himself in his first pro season, scoring 43 goals and 89 points with New Brunswick of the AHL.  He started his second pro season in the CHL and was a point per game through 31 games.  He was ready.  It was time for the callup.

Norm joined a Leaf team that was in crisis.  This was 1981-82, the year most famous for the trading of Darryl Sittler.  The feud had been coming to a head near Christmas and finally culminated with Sittler leaving the team on Jan. 5, 1982.  He was traded on the 20th.  Imlach was at war with his players, bodies were coming in and out of the lineup.  This was also the season the Leafs used the rookie trio of Benning, Boimistruck and McGill on the blue line and Bunny Larocque as the starter.  With everything going on, losses were plentiful.

Norm had been called up around New Year's, and his first game on Jan. 2 was Sittler's last.  The Leafs were pounded 6-2 by the North Stars, dropping their record to 11-18-9.  In the third period, down 6-1, Terry Martin fed Norm, who beat Gilles Meloche for his first NHL goal.

Four days later, the Sittler-less Leafs played the North Stars again, this time managing a 3-3 tie in Minnesota.  Norm scored his second and third goals.  Wilf Paiement assisted on one of them, suggesting Norm got some time on the top line.

Whether he spent the month of January replacing Sittler or not, it was a very good month for him.  Through his first ten games, he had seven goals and four assists, and nine goals and five assists through his first fifteen.  The highlight of the season came on Jan 16, when he scored two goals and two assists as the Leafs shocked Edmonton 7-1.

The Leafs were playing a bit better, winning four and gaining three ties in their first nine without Sittler.  They went right into the sewer after that, though, and Norm went with them.  After scoring 14 points in his first 15 games, he'd score just 12 more in his next 28.

A year later, Norm split the season between the NHL and AHL, scoring just 5 points in 26 games with the Leafs.  He'd put up good minor league numbers the rest of his career, but there was never another callup.

Norm would be suspended and released in 1984 for refusing to report to training camp.  The Oilers signed him, but he only played in the A.

His last moment of real interest came in the minors and sort of mirrors his pro career - great start, iffy finish.  Hockeydraftcentral has the story:

Aubin Plays Goal: Aubin was forced to be a goaltender for St. Catharines (AHL) during the team's Feb. 10, 1983, game vs. Adirondack at Glens Falls, N.Y. St. Catharines lost the game 6-3, but Aubin, who had not played goal since he was 7 years old, made headlines with his performance. Aubin was pressed into duty in the nets because starting goalie Vincent Tremblay pulled a hamstring in the first period, and backup Bob Parent was out serving a suspension for receiving a match penalty the previous night. Aubin had been designated as the backup in case anything happened to Tremblay. After Tremblay went down, Aubin went to the locker room and put on Tremblay's pads and uniform, entering the game with 7:01 remaining in the first period of a 1-1 tie. He stopped all 16 shots he faced for the rest of the first period and through the second, but finally cracked in the third period, giving up five goals. Adirondack's Tom Rowe broke the shutout string after Aubin had gone 30:38 without allowing a goal.

Visit the Norm Aubin Gallery at the HHOF.

The HHOF take on Norm:

Man, could this guy score before he got to the NHL! Eight goals in one game for Verdun to break a record most recently set by Guy Lafleur. A total of 258 goals in 244 games in junior and then 43 in his first year in the AHL.

The Leafs drafted him 51st overall in 1979, but when he got to the NHL he responded with seven goals in his first eleven games and then fizzled, scoring just 18 times in 69 games over two years between 1981 and Ô83.

Demoted to St. Catharines, Aubin had one more story left in him. The Saints were in Glen Falls, New York to play the Adirondack Red Wings, but the starting goalie Bob Parent had been suspended, leaving only Vincent Tremblay to mind the goal. Halfway through the first period, Tremblay pulled a hamstring, and couldn't continue. Aubin donned the pads for the rest of the game, giving up five goals in a 6-3 loss. He retired altogether in 1985. 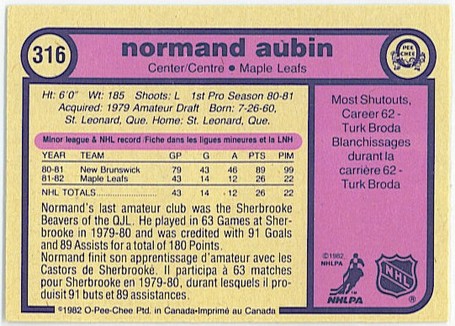