The diamond penalty kill has been awful for the Leafs which isn't really a surprise.

This season the Leafs have been using the diamond on the PK. The idea is to force the opposing team to the perimeter so they can't take quality shots while clogging the middle of the zone to prevent cross zone passing. If you're at home saying "wait, isn't that what our power play does?" then you're starting to understand why our PP is awful.

The penalty kill has been pretty good. It's disheartening that it took our coaching staff an entire season to figure out that blocking passes with skates and being able to swing your stick with one hand to deflect passes would help but that's in the past. Here's Washington's first power play on Wednesday night. The diamond collapses because of Tim Brent:

Tim Brent is circled in blue. His stick is directly in the passing lane (shown as the green line from the puck circled in green to the red circle: Mike Green. Seems like a lot of colors...).

Mr. Brent should be a lot closer to Mike Green on this play. As it stands looking at the video you can see our players are essentially in a straight line. If Alex Semin were to, hypothetically, pass to Mike Green it would leave Jonas Gustavsson all alone with noted sniper shutdown d-man Green while moving across the front of the net. 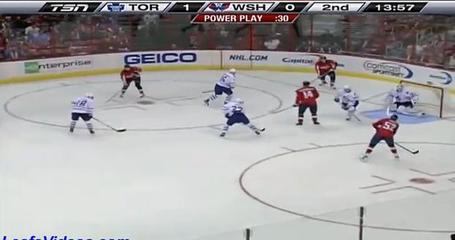 Essentially there are two failures on this play. Brent drifts out of position and whiffs on stopping the pass which goes within inches of his stick blade.

The good news is that this is coachable; I'm sure Tim Brent has watched this video more than fifty times by now. The Leafs PK has been sloppy the past few games. They'll need to get it to return to form to get back to their winning ways.