After starting the season with four straight wins, the Leafs of this year looked like they were going to be much improved over last. The goaltending was better. The "culture" in the dressing room was supposedly different. There were even some changes in the systems, most notably allowing the players to use only one hand on their stick during the penalty kill.

Since that point, however, the Leafs have gone 1-5-3, a point-percentage of just 28%. A dismal performance.

One of the key problems in the losing stretch is the lack of offense. This has been touched upon ad nauseum, and was in fact, a known problem heading into the season. The important question becomes, though, how can we change it? How can we turn loses into wins?

Ron Wilson has his own ideas. Here's what he had to say after Saturday's loss to Buffalo about the lack of offense from our top line of Kessel, Bozak, and Versteeg:

They're not producing any offence and in fact their effort is a little off. They don't get any offence because they're basically not working hard enough defensively.

Now, there's a case to be made here. At times, the entire team has seemed to like effort and a sense of urgency.

At some point, isn't it the coaches job to make the team better? To take the players he has, and improve them -- or at least, exploit their talents, and minimize their weaknesses?

Now, I'm among those who have been pushing for Ron Wilson to be fired for a long time, and every time I bring it up, I'm met with opposition, usually with some legitimate arguments. Most notably, that it's too early in the season to heap blame on the coach, that the losses add up to bad efforts and bad bounces, not bad coaching.

The question isn't whether Ron Wilson is or isn't a good coach. The question is, will replacing Ron Wilson improve our record? If the answer is "yes", obviously, we should do it as soon as possible. But how can we know? This got me to thinking, maybe there's some historical evidence to shed some light on this issue.

Since the 2008-2009 season, there heave been 10 coaches that were fired mid-season. Here are the statistics on when these teams replaced their coach, how the team was doing before the coach was relieved, and how they performed under a new bench-boss.

Summary: The CBJ did much better with some guy named Noel than with a Stanley Cup winning coach. Much better.

Summary: St Louis finished 9th, missing the playoffs by 5 points. However, perhaps replacing their coach earlier could have made up this ground, as they did show modest improvement.

Summary: Changing coaches after 27 games seemingly did little to affect Philadelphia, as they under performed all of last year. That is until their new coach took them to within one goal of the Stanley Cup.

At first I wasn't even going to look at this once, since Tampa ownership was so inept to replace a bad Barry Melrose with an even worse idea, Rick Tocchet. Even still, they only did marginally worst under Tocchet.

Summary: The Penguins were just above .500 when they fired Therrien. They lost only 3 games in regulation the rest of the regular season, and went all the way to lose to beat Detroit in the Cup Final. Coached by some guy no one had ever heard of.

Summary: It wasn't enough for Ottawa to make the playoffs, but they did significantly better under the coaching of Murray compared to Hartsburg.

Summary: The Rangers had a pretty good winning record when they replaced Renney, but this didn't stop the team from improving when they brought Torts on board.

Summary: The firing of Carbonneau was perhaps most surprising, considering that at the time, the Canadiens were still destined for the playoffs, and Carbonneau had a career record of 89-59-16 as coach. Even though the Canadiens did marginally worse after replacing him with Gainey, the difference was small enough for them to still squeak into the playoffs.

Summary: Laviolette had already won a cup with Carolina, and was back to the finals with Pittsburgh last year. Even still, replacing him with Paul Maurice (!) led to a 10% increase in points percentage for the 'Canes.

Summary: Perhaps the most famous, the Hawks replaced Hawk legend Savard after just 4 games. The small sample size is perhaps too difficult to make any judgments about how much this team improved under Quenneville, but it goes to show that it's never too early to make a coaching change.

So there you have it folks. Of 10 of the teams that have made changes to their coach mid-season in the past two years, 70% of them made noticeable improvements. This was true regardless of whether they were performing well (New York, Carolina), or not (Columbus, Ottawa) or when they did it. Importantly, the teams that got worse only got marginally worse ( about 5% change in points), whereas teams that got better, tended to get much better (about 16% better on average).

Now obviously, there are a myriad of reasons why a team's play can change from one point to the next, but the record is pretty astounding. Even replacing the most grizzled and accomplished of coaches almost always seems to have a positive impact on a team. In fact, a few years ago I came across an article (which I can no longer find) describing a business Professor who has studied this effect. His results: changing coaches mid-season almost always has a positive effect on a teams performance. So his advice: Don't wait to fire the coach.

The ball's in your court, Brian.

Here is a figure from the article, Manager Coach Mid-Season Replacement and Team Performance in Professional Team Sport from the Journal of Sport Behavior (1995), by McTeer, White & Persad: 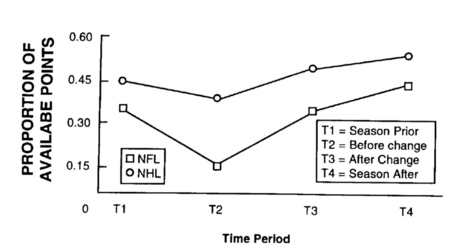 As you can see, in the 24 occurrences in which they examined, there was about a 20% increase in points obtained from before the change (T2) to after the change (T3). They conclude that these effects are likely to be short-lived, but in the short term, a change mid-season tends to improve performance.