Measuring The Impact Of Special Teams

Share All sharing options for: Measuring The Impact Of Special Teams

Last Thursday Chemmy wrote a post looking at the Maple Leafs' special teams play over the course of the season in individual games as well as on an ongoing basis. It's a seemingly simple concept for a post: the Leafs' PP and PK are getting worse as the season wears on and that is a bad thing. Of course, assuming that it's a simple concept presumes that you are not Steve Lansky. Who's Steve Lansky? Well, he's one of the other writers over at The Leafs Nation. Judging by his inability to follow simple logic he may be a close relative to Howard Berger. His reply is befitting someone that no doubt grew up eating paste during craft time: PP Success Means Nothing.

Considering his supposed background, it's no shock that he'd go the mittenstringer route. It's a tour de force! There's the suggestion that Chemmy said that a good powerplay was a guarantee of making the playoffs. I defy you to find it. There's misrepresenting that Chemmy's post was solely based on the powerplay and not the penalty kill. And then, to complete his ode to mittenstringery, he comes to a completely wrong-headed conclusion.

I don't think that it is a controversial statement to say that at a macro level that good special teams are generally a mark of playoff teams. A commonly used measure to gauge a team's special teams is to add up their powerplay effificiency and their penalty kill success rate. If it's over 100 that is good and if not then that is bad. Of course, as with any analysis it is imperative that you have the intelligence to understand that not everything is black and white. Sometimes teams with a good powerplay will be lousy five-on-five or brutal on the penalty kill and that can be enough to keep a team out of the playoffs.

In this post, I'll look at the five seasons since the lockout and examine the results with an eye towards a team's power play + penalty kill, their 5-on-5 results, and the net impact of their special teams. Follow me after the jump and ignore little Stevie and his dunce cap in the corner.

The graphs below will be very easy to read. The green boxes are playoff teams and the red ones are the outliers that I'll look at more in-depth.

Legend: PTS = Points, 5-5 F/A = Goals scored five-on-five divided by those allowed. 1.0 is a good mark, PP% = powerplay percentage. I said this would be easy., PK% = you guessed it, penalty kill percentage, PP+PK = It is accepted that anything over 100 is a good result, Net ST = This is the net number of goals that special teams contributed. I took (powerplay goals for minus shorthanded goals against) less (powerplay goals against minus shorthanded goals for) to arrive at this number. 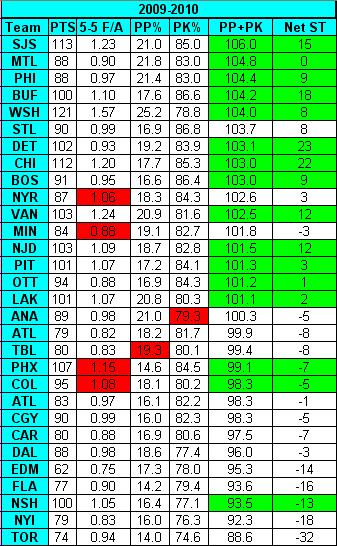 For last season 13 of the 16 playoff teams had a special teams total of over 100. That figure includes the top five performers and eight of the top 10. As you can see by the table, while it's no guarantee of making the playoffs it does make it much more likely. What about the outliers? 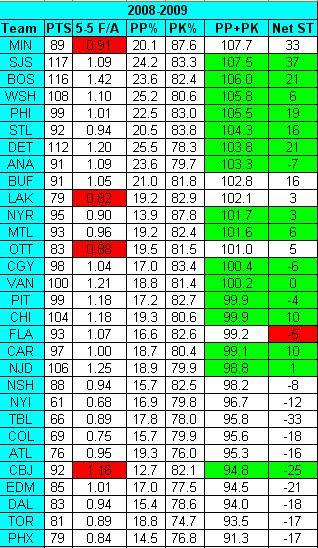 For last season 12 of the 16 top PP+PK teams made the playoffs. That figure includes seven of the top eight performers. 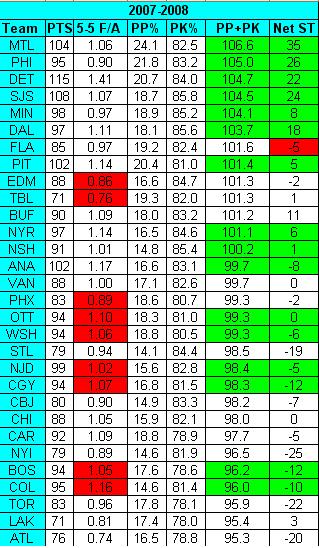 In this season, 10 of the top 16 PP+PK teams made the playoffs including the top six. 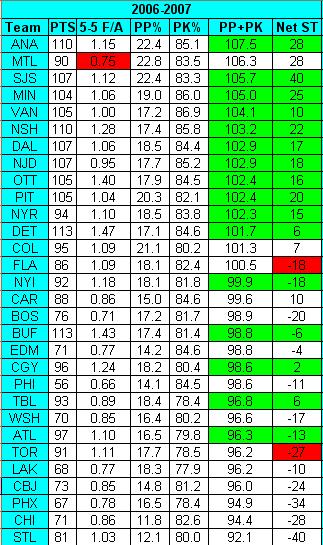 This season saw a return to form as 12 of the top 16 PP+PK teams made the playoffs including 11 of the top 12. There was even the first team to have a sub-100 PP+PK team with a sub 1.00 5-5 F/A team making the dance in the Tampa Bay Lightning. Of course, it doesn't come without a caveat. The Lightning had a 10-2 shootout record that allowed them to punch above their weight. 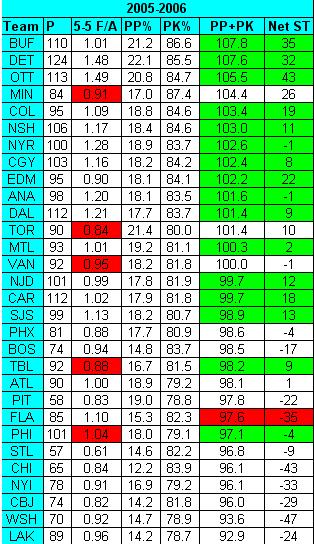