How long does it take for the Maple Leafs to throw away a late lead? Four seconds. 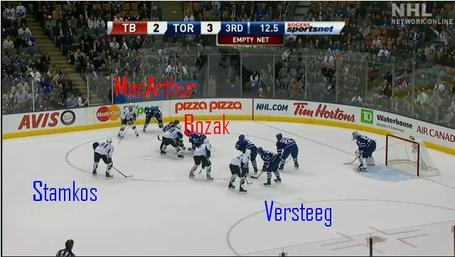 Doug MacLean apparently said he'd never seen a face-off alignment like this one. To be honest, I am not sure what you might do differently other then maybe get Francois Beauchemin alongside Luke Schenn leaving Kris Versteeg on the outside of the pack. As it stands, it seems pretty standard. What happens depends on where the puck goes off of the face-off. If Tyler Bozak had won, as he did 60% of his draws, then Beauchemin is well positioned to win a race to the puck and he can backhand it up the boards (not my preference) or he can fire it to the far side since Martin St. Louis is the long Lightning back.

Unfortunately, that's not how things played out. 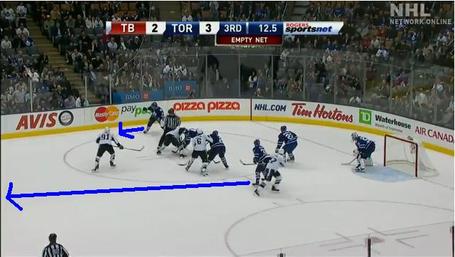 When Dominic Moore (of course) wins the face-off the puck goes towards Clarke MacArthur and Steven Stamkos. MacArthur squeezes past his man in his attempt to beat Stamkos to the puck. Kris Versteeg needs to get on his horse to get out to St. Louis. 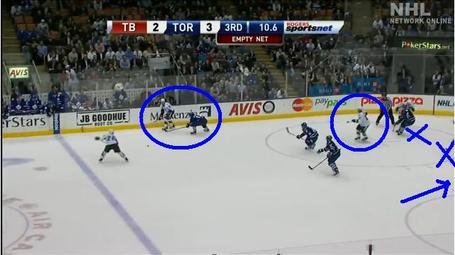 MacArthur loses the race as the delay in shoving past his man and the advantage of the puck going towards Stamkos makes the difference. Tyler Bozak has left his man behind and Versteeg is on his way towards the point but he is going to be too late. On the back end, there are now four Lightning players going towards the net against only two Leafs. This is not good. 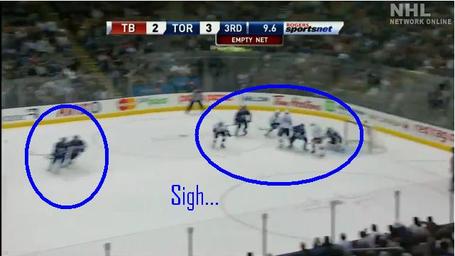 I won't mince words: if Mike Brown had not been injured on the previous shift he would have been out and would have laid out to block the shot. At the very least, he would have been down and let Jonas Gustavsson see the puck. Instead, Bozak and Versteeg did not make fully committed attempts at blocking the shot. The puck went between them, past the mass of people in front of Gustavsson and into the net. Even if Gustavsson had made the save the defenders were outnumbered 2-to-1 because of Bozak's decision to go to the point. 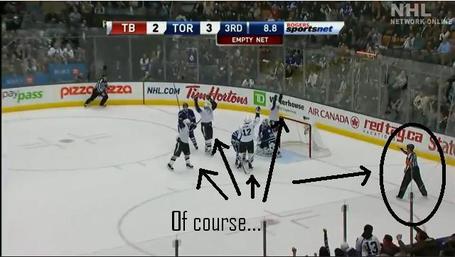