Share All sharing options for: Would Julie Kotter throw out Ron Wilson?

It has been a while.  Aside from normal bouts of busy-ness (as opposed to business, which is also true but not what I wanted to imply), large bits have been falling of the car and I have been patiently explaining to them that they should stop.  My skills at reasoning with inanimate objects clearly aren't what they once were as I am now paying someone else to reason with them somewhat more forcefully.

Here we see Julie, Gabe Kotter's wife, voiding the humanity of the mostly-harmless Arnold Horshack.  Julie was a generally-sympathetic character in the series, though not in this instance.  Gabe Kotter himself is out of the picture somewhere, though we trust that he's there (or pretend that we do).  After all, what is "Welcome Back, Kotter" without the Kotter?

This, interestingly (or not), foreshadows the 1978 season, in which the series tried to survive the increasing inavailability of its two primary actors.  John Travolta was becoming more and more of a big deal and was so busy with his burgeoning movie career that there was precious little time left for the sitcom.  To round out the Sweathogs, they added a new character named Beau, an import from Louisiana who shared some basic characteristics of Barbarino (less the charm) but never managed to really mesh with the the gang or the show.

Every bit as troublesome was the absence of Kotter himself.  Gabe Kaplan wasn't around a ton and so his character was "promoted" to vice-principal, explaining why he was never teaching or visible in any way.  (Need Gabe?  Let's call him on the phone!  No, you can't hear his voice, but he's there, trust us.)  It didn't work.  Other shows dealt with this.  Happy Days survived the loss of Richie.  The less said of Coy and Vance Duke, though, the better.

At the end of the day, 1978 highlighted something Julie doesn't seem to realize in the card above.  It's easy enough to get rid of someone, to kick them to the curb along with the rest of the garbage.  The trick is in replacing them.

There's a lot of ways one could go from here.  Given the roster turnover the past couple of seasons, there is no shortage of players that have been kicked to the curb.  Some are faring well, others are finding new groups of fans to annoy, and some are looking for spot duty in Sweden.

That's not my focus, though.  I want to talk about coaching, since that's getting up there on the hot-button list.

Up front, I can't say whether Ron Wilson should be fired.  There are a number of considerations - is there someone else available who could reasonably be expected to get better results?  Is Wilson the ideal coach not necessarily for the team Burke has at the moment, but the one he expects to have in a year or two?  Can any coach win with this group of centers?

Since I began watching this team in earnest, I've seen three mid-season coaching changes.  In 1988-89, George Armstrong (really Garry Lariviere) took over from John Brophy.  Tom Watt replaced Doug Carpenter 12 games into 1990-91, and Nick Beverley coached the last 17 games of 1995-96 after the dismissal of Pat Burns.

In each instance, the team's record is better after the change than it was prior.  What I can't say with any real certainty, though, is whether the change itself had any real impact, or the team simply returned to form and played at their normal pace without the coach-killing slump on their record.

One thing is clear, though - the Leafs never got the coach they wanted by firing someone mid-stream.  Armstrong didn't want the job in the first place and almost all the day-to-day work was actually done by assistant Garry Lariviere.  Doug Carpenter was coach the following season.  Tom Watt actually got one full season in the job, but was kicked upstairs when Pat Burns became available.  I'm not certain just what happened to Nick Beverley (who is actually the most successful coach in Leaf history in terms of winning percentage, only a one-year St. Pats coach did better), but he was gone for players' choice Mike Murphy after a first-round playoff exit in 1996.

Those changes, then, were basically slump-busters.  There was no meaningful direction change.  The team didn't particularly take off and hit new heights under any of the new coaches, but managed to end the horrid streaks they were on and played more or less to original expectations.  The problem was just that playing to expectations didn't mean a whole lot.  The teams themselves weren't good enough.

The Leafs have actually had that kind of turnaround as well, at least to an extent.  You just have to go back a long ways to find it.  The first was in 1931-32, when Dick Irvin took over an 0-3-2 Leaf team and won the Stanley Cup with it.  The last was in 1958-59, when Punch Imlach replaced the 5-12-3 Billy Reay with himself, squeaked into the playoffs on the last day of the season and then rode a hot streak right to the Stanley Cup Final.  He'd guide chamionship teams in '62, '63, '64 and '67.

One thing that is kind of interesting about that '58-59 team, at least to my eyes, is how much it resembles this one - both in terms of where it was in the rebuild cycle and where all the holes were.  The Leafs of the 1950s and the Leafs of the post-lockout era share some similarities.  In both cases, you had teams that were pretty strong but were slipping due to a combination of age and injury.  A lot of trades were made to try to shore things up, but they were generally short-term fixes that didn't quite bring the results people hoped for.  Within a few years, it bottoms out.  The team is made up of kids and also-rans.  New management comes in and sweeps clean.

By 1958-59, the Leafs had their goaltending set, with a 34-year-old veteran (Bower) shoring up their "goalie of the future" (Chadwick).  They had the defense working, with some kids from the system (Baun, Brewer, Reaume) taking on some bigger roles.  They had an offensive defenseman who'd never been "right" since taking a nasty hit a couple years earlier (Horton, who they almost traded away), but they added a veteran (Stanley) who meshed well and they'd both play the best hockey of their careers together.

At forward, they had some home-grown talent and added a couple interesting veterans, but basically all their talent was on the wings.  They were woefully thin at centre.  Billy Harris was creative and could pass, but he wasn't particularly big and if you needed to stare down the Jean Beliveaus of the world and the best you had to offer was Harris, then that was trouble.  By the time the Leafs were real contenders, Billy Harris was their third-line centre.  Everyone else the Leafs were trying at centre would find most of their success on the wing.  Without that top-line centre in their lineup, they had a terrible time scoring goals.

I've been reading Kevin Shea's "Diary of a Dynasty," and I've just finished the bit on '58-59.  The Leafs under Reay had become a team afraid to make a mistake.  A bad cough-up would put you on the bench and you didn't know when you'd get off it.  For all Imlach's reputation as a taskmaster, he let the players play and was more into teaching than punishment.  Even Frank Mahovlich got on with him in those years.

It's not that Reay was a bad coach, particularly.  He'd have some pretty good success with Chicago in the '60s.  It just wasn't working in Toronto.  With Imlach, it was a better fit, the team was looser and they played better.  It also helped that Imlach had the backing of the GM, a fellow also named Imlach.  He made this change 20 games into the season, right around the Grey Cup.  Parallels?

The coaching change alone wasn't enough, though.  The Leafs tried all season to shore up the forwards, picking up winger Gerry Ehman and centre Larry Regan in mid-season minor-league deals.  These were key to the late-season resurgence, but even they were both gone by the time the team was ready to win.  The Leafs needed a huge stroke of luck in the acquisition of Red Kelly in 1960 and the emergence of Dave Keon the next season before they had the calibre of centres necessary to become champions.

While it's kind of fun to infer that if Brian Burke would just coach this team himself, they'd be in a position to win the 2014 Stanley Cup, it's not exactly a likely scenario.  Just as Billy Reay couldn't win without centres, Punch himself didn't do much better until he added some pieces.  Any replacement for Ron Wilson needs to find away to score without a real presence up the middle and unless Burke can find even an interim fix (at minimum the Larry Regan of 2010-11 and a Gerry Ehman would be nice), nothing of significance is going to happen.

(That late season run of 1958-59 is a pretty good story and I've been saving both Regan and Ehman as LotD until there is a playoff chase to talk about.  They've been waiting in the scan pile for quite a while, now.)

Oh - the back of this card actually strikes me as kind of creepy.  It's part of the puzzle (is that a metaphor?  Is throwing someone out with the trash actually a key part of the puzzle?  Interesting.) and shows Vinnie Barbarino and Freddie Washington in what should be sort of a nice class picture but comes off as more of a mocking leer.  (They mock our pain!)  That is also the tip of Arnold Horshack's hat, but as with everything, we have to take it on faith that his head is actually under it. 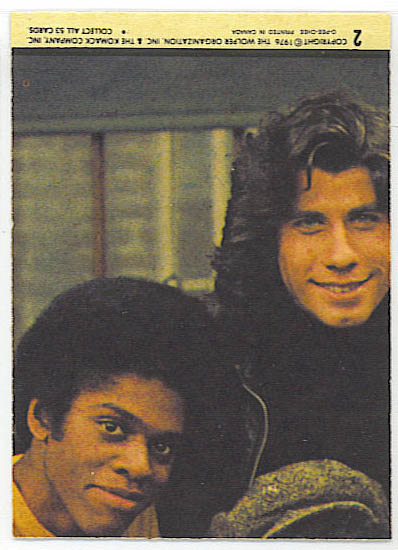